The tragedy of "The Remains of the Day" might be more realistic, but all we want from "Downton" is fantasy 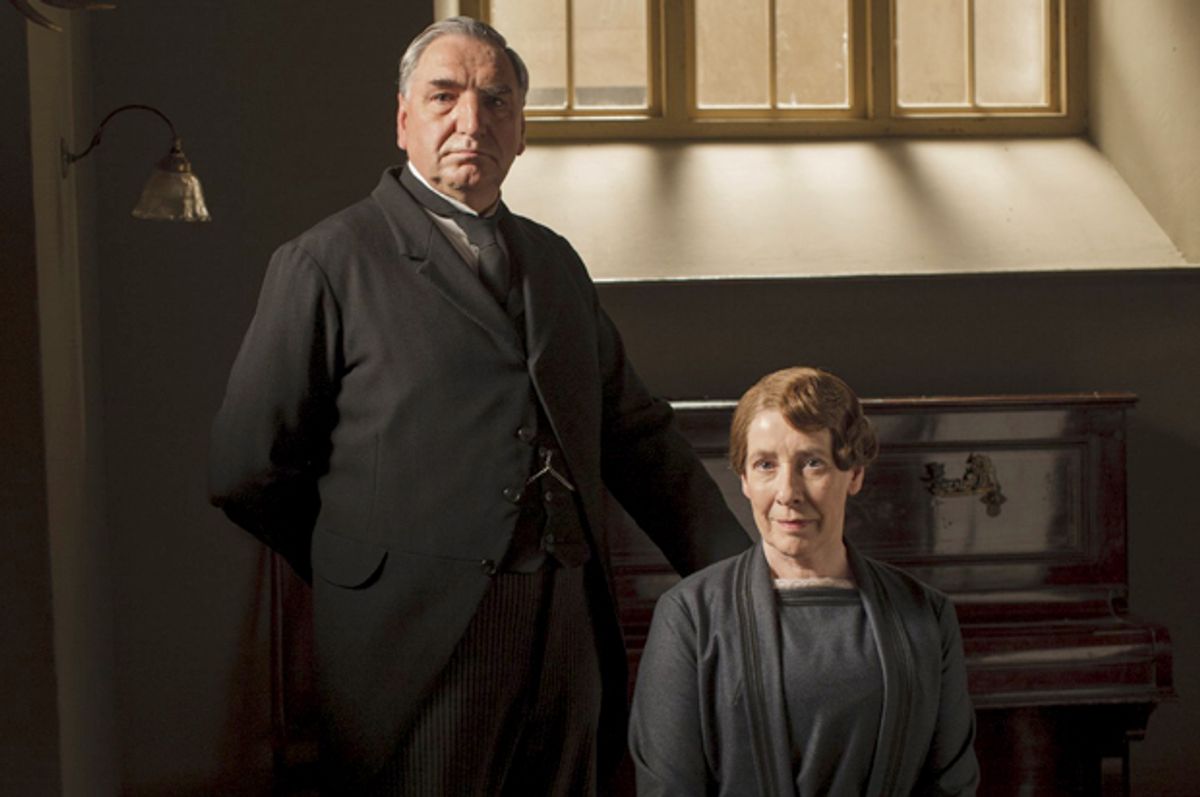 Nearly buried in last night’s season finale of “Downton Abbey” was the culmination of a series-long subplot, simmering for five seasons with the audience and over a decade in the timeline of the show. The British import has killed beloved characters off with car accidents, struck down innocents with the Spanish flu, and drawn out one couple’s romance for almost a decade, but last night’s might be its most shocking twist: It finally allowed its most intimate couple a chance at romance. That’s not anyone young, or anyone rich, either; it’s the butler and the housekeeper, below-stairs.

Mr. Carson and Mrs. Hughes, played by acting heavyweights Jim Carter and Phyllis Logan, have been reliable fixtures of the downstairs stories in “Downton Abbey”—both as consistent fictional characters and dependable Edwardian servants. Carson’s name, in the show, is synonymous with gruff, endearing rigor; he’s more exacting about propriety than anyone else on the show, including knowing exactly where his place is. Mrs. Hughes, meanwhile, is the soul of efficiency. Anything that crosses her purview is handled with quiet expedience, whether that means managing the upstairs family’s dramas or the downstairs servants’ trials and tribulations. Unlike the other servants, they each have their own office. In the privacy of their chambers, Carson polishes the silver and filters wine in solitude, while Mrs. Hughes rotates linens and occasionally experiments with newfangled contraptions like the toaster. Dinner, for the servants, can only start when they’re both present. Carson sits at the head of the table, and Mrs. Hughes at the foot. If it sounds like they’re the de facto mother and father of the household, it’s because they are.

Carson’s engagement to Mrs. Hughes in last night’s finale is taking their professional intimacy to its logical conclusion—logical for modern audiences, anyway. This is television, and we are a viewing audience that believes wholeheartedly in workplace romance, whether that comes in your detective-partner-barely-consummated “The X-Files” variety or your and-then-they-lived-happily-ever-after “ER” variety. In the landscape of television, five seasons of making eyes at each other and holding hands once or twice isn’t even that long.

But in the context of 1924, which is when the episode takes place, it’s a lot more shocking. “Downton Abbey” has had servants marry before, but never such high-ranking ones; it would have, in all likelihood, been strictly prohibited. This is a very pleasant fiction, on levels—allowing for both a workplace where a sudden marriage between two professionals expected to remain single would be tolerated in these positions; and one where a lifelong housekeeper and butler would even have the emotional bandwidth to fall in love with another human being.

Carson and Mrs. Hughes are, not so subtly, a rehash of another fictional butler and the fictional housekeeper he was in love with—Mr. Stevens and Miss Kenton of Kazuo Ishiguro’s 1989 novel “The Remains of the Day,” which was made into a film starring Anthony Hopkins and Emma Thompson in 1993. And where “Downton Abbey” is a cheery vision of aristocracy as a graceful system of noblesse oblige, “Remains of the Day” is a tragedy so carefully constructed that it reads almost triumphant—the tragedy of service, specifically; of how being a good servant comes at the cost of feeling emotions like the rest of us.

Halfway through the book, for example, Stevens relates of a terrible evening where his father dies during an important dinner for his employer, Lord Darlington. Stevens is not being forced to ignore his father’s sudden decline and passing so that he can do his work, but he forces himself to do it, anyway—pouring port for lords and ladies, tending to the bandages of a crotchety French diplomat, making small talk about plants. He does not show up to the moment of his father’s passing, and he does not see the awfulness of letting his work for these aristocrats supplant his personal crisis. Later, he recalls: “For all its sad associations, whenever I recall that evening today, I find I do so with a large sense of triumph.” It’s this same focus that leads him to overlook and dismiss entirely the love he feels for Miss Kenton—and the love that she feels for him. (When she is attempting to tell him how she feels: “I have not taken anything you have said to heart, Miss Kenton. In fact, I cannot recall what it is you might be referring to. Events of great importance are unfolding upstairs and I can hardly stop to exchange pleasantries with you.”) The book ends with Stevens only barely able to understand the personal life he gave up to satisfy his sensibilities of what it meant to be a good servant—to preserve “a dignity in keeping with my position,” as he says.

Carson and Mrs. Hughes from “Downton Abbey” occupy the same time period (the ‘10s and ‘20s) and the same positions as Stevens and Miss Kenton; they’ve shared some of the same plots, too. Mrs. Hughes considered marrying a man from her past and leaving service a few seasons ago, as Miss Kenton eventually does in “Remains of the Day.” The difference is what’s insinuated to the audience about service. It’s very easy to read “Remains of the Day” as a wholesale critique of service—Stevens is so distorted by stripping away his personality to serve others (his “masters,” his “betters”) that he cannot even see his recollections as sad. He is entirely about manners and propriety and the desires of others; he can’t even see himself.

“Downton Abbey” is a deliberately much more lighthearted show, largely because it makes its aristocratic family, the Crawleys, into perfect examples of noblesse oblige. The part where the downstairs staff is literally at the upstairs' beck and call tends to be played down, in favor of cutesy drama that never questions the status quo. In that sense, Carson and Mrs. Hughes' engagement, as muted and affectionate as it is, falls in line more with the show’s interest in sundown romances—both the Dowager Countess (Maggie Smith) and Isobel Crawley (Penelope Wilton) have courted suitors this season.

And yet, the class element is there, and the show struggles with showing the pomp and circumstance of aristocracy without revealing the ruthlessness that would necessarily underpin it. In last night’s episode almost every subplot—played mostly for laughs—was about keeping butlers, in particular, in their place. At the Sinderbys’ estate, a rude butler is manipulated into being deferential by Lady Mary, Miss Baxter and Mr. Barrow; as Mary says cuttingly upon witnessing her plans come to fruition, “the butler’s back in his box.” An employer snaps at his butler, “Do you dare to use the word ‘obviously’ when you contradict me?” And the Dowager Countess has to put down her own butler for having too many airs with her ladies maid (who calls him a “dreary little man”). On one hand, the episode works to remind the audience and the Crawley family why Carson’s excellent service shouldn’t be taken for granted. On the other hand, it’s an uncomfortable little parable about keeping servants in line.

It extends to our lovebirds, too. Carson and Mrs. Hughes end up inching closer and closer to domestic partnership when they engage in a business partnership—this is a workplace romance, as I said. But they take advantage of the upstairs family’s holiday on a shooting trip to have their version of courtship—inspecting properties for their venture, making plans and even drinking leftover wine out of a crystal carafe. Carson brings it to Mrs. Hughes with undisguised glee: No one will miss it, because it’s extra, and they’re away tomorrow; for once, they are free of the shackles of servitude. For a few brief scenes they’re even wearing casual clothes, instead of their severe dark uniforms. And when Mrs. Hughes worries that she doesn’t have the cash for their venture, Carson concludes, practically, that he hates to change a plan when there’s no need. “I’m not marrying anyone else,” he points out.

There’s one way to look at the engagement of Carson and Mrs. Hughes, and that’s as the escapist fantasy that “Downton Abbey” is always happy to be. The other way to look at it is as a flight of fancy so radical that it’s political; these are two people of the lower classes making the choice, late in life, to live for themselves from here on out. I’m honestly of the opinion that the show has no idea which one it’s going for; if the past five seasons have taught us anything, it is that “Downton Abbey” is kind of just messing around with its very pretty production values. I am pleased to see a version of Stevens and Miss Kenton get a happy ending. But I think that happy ending comes at the expense of us, the audience, being truly critical about what was required of these servants—and in blissful ignorance of how much of a privilege marriage was at the time. As it turns out, it still is. And if we can’t even be critical about the past, how could we possibly be critical about the present?