TV's cruelest night: "The Bachelor" enjoys the ruthless public shaming of its "Women Tell All" event a little too much

The sordid spectacle proves that pain, not romance, is the "Bachelor"'s true end-game 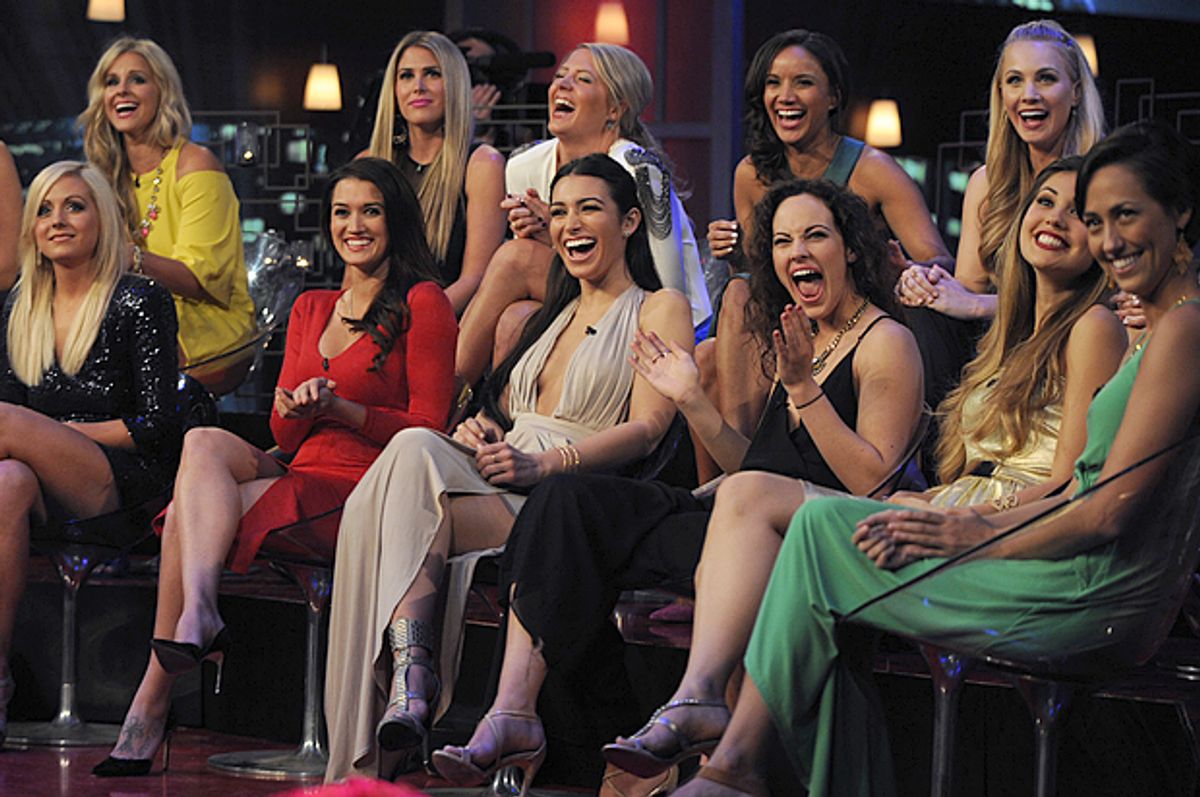 "The Bachelor" is a cruel show. Thirty women are forced to compete for the attention of one man, a contest that involves a certain amount of strategy and backstabbing, before all but one (and sometimes all) are dumped publicly on camera. And yet amid the season-long march of cruelty, one night stands alone it its gladiatorial ruthlessness: The spectacle of public shaming known as the "Women Tell All."

For those who don’t know, the "Women Tell All" is the evening when the women confront one another, and then confront the Bachelor (Iowa farmer Chris Soules), about all the ways they have been wronged. Nothing productive is really revealed and no hatchets buried — rather, the evening lays bare the inherent cruelty of the "Bachelor" endeavor by letting the carefully crafted facade of civility built over the season devolve into a screaming, sobbing, backstabbing spectacle. The “Women Tell All" is much like an episode of "Jerry Springer" or "Maury," except these are people we have spent months watching and that we feel we know, targeted and interrogated at their most vulnerable in a glitzy, arena-like setting. It is awful. It is great TV.

The "Women Tell All" event is like the worst form of high school bullying
Throughout "The Bachelor," the women can, of course, be mean about each other. They’re all living together and dating the same guy, after all, and one-on-one sessions with the camera are perfectly designed to elicit catty comments. Kelsey mocks Ashley I. as a "Kardashian who didn't get to go on a princess date.” Later, Ashley I. suggests that Kelsey might have made up her dead husband. Carly makes a hand-puppet of Britt and then makes it say “I’m Britt and I’m a liar” and cheers when she gets eliminated. While the ladies don’t know what’s being said about them to the cameras when they aren’t around, they eventually get to watch it when the show airs live like the rest of us, and to lick their wounds and stab their Britt-shaped voodoo dolls in private. Well, until the "Women Tell All.”

The "Women Tell All" takes every anti-bullying lesson any of us ever learned (we're looking at you, guidance counselor Kelsey) and throws it out the window. Imagine having the meanest thing you ever said about a friend shown to her, getting to see her face in close-up she watches it transpire, and then having her confront you about it -- all on national television. It constantly reminds us of the tension between forming genuine relationships and crafting a narrative for the camera that the show exploits in order to create good TV. As Chris Harrison constantly says, this has been one of the most interesting seasons yet -- and therefore, one of the most brutal for its contestants. As Britt asks, through tears, why did Carly “pretend” to be her friend in the house only to insult her repeatedly when alone with the cameras? Why? because that’s the nature of the show. If it hurts, it means it's working.

This part of the episode oscillates between public shaming and bizarre group therapy, with Chris Harrison as the domineering therapist, chiding the women on and cutting them off  when he sees fit. ”Can I say something?” one of the women asks. “Not right now,” Harrison snaps back. Chris Harrison isn't a qualified psychiatrist, right? He doesn't have a degree in social work? And yet he choreographs this showdown with a skillful, near-sociopathic ease, allowing Kelsey, "the show's most controversial contestant," to get shamed and denigrated by every member of the group in turn. Nobody stands to defend her. Juelia says, "I've literally never met someone so fake in my entire life.” Megan says, "I don't know why you put yourself on the show.” The studio audience claps, chiding the women on in their abuse. And if it seems that a positive development is about to occur, an olive branch extended, Harrison quickly moves us on to the next segment. No time to waste, people.

This is emotional exploitation at its worst ...
As a culture, we are unhealthily obsessed with women’s crying faces. As our own Erin Keane wrote, "There’s a weird strain of schadenfreude in the public fascination with the female cryface: as though we’re eager to see a woman who is usually perfectly composed … lose control in a messy and public way. It’s a hyper depiction of extreme and traditionally-feminine vulnerability that can be used to cut her down to size.” "The Bachelor" is always full of tears, but here they truly seem to be the show's main export, the salty fuel on which it runs. The "Women Tell All" begins by showing the women in their most vulnerable moments, like Kaitlyn sobbing in a van as she is sent home in Bali. Meanwhile, a box in the corner allows us to watch them as the women react to their own humiliation, and we get to see them break down again, in miniature. Then they are invited to the hot seat, where they must do everything they can to keep it together as they are shamed by their "friends"/"ex-boyfriend"/the American people, or else succumb and cry for a third time. Sure, they all signed up for this, and sure, this is the nature of the beast, but even if you take into account the artificiality and performativity built into all reality shows, the underlying logic of this evening remains a particularly cruel one. ... Not to mention the death of romance
Then, as if things weren't bad enough, the Bachelor himself shows up. Sure, it’s all fun and games for some of the contestants, but Jade went to his hometown and met his family, and then showed him (and America) her darkest secret before getting dumped. Kaitlyn was flown to Bali, where they told each other they were falling in love with each other, before she got sent packing. In "Bachelor" world, some of these women had what qualifies as a real romantic relationship, one whose cessation caused evident emotional pain. On “The Women Tell All,” not only are the women forced to watch the breakups happen again on TV — while surrounded by 29 of their closest frenemies and a studio audience — then they get to see their “ex” for the first time since he dumped them on national TV and confront him about all the ways he wronged them.

These confrontations expose the true mission of "The Bachelor." During the series, the main focus is on finding romance, with grief as an unavoidable side effect. Here, the goal is only pain. In the hot seat, as each of Chris’ “exes” has a five-minute window with which to confront his transgressions, and Chris squirms embarrassedly and fumbles over his words, it becomes clear that nothing positive can come of this. The worst interaction of last night might have been with Jade, who was sent home after revealing that she posed for nude photos, and has all of five minutes to confront Chris regarding his callous language about her on his People Magazine “Bachelor” blog. We really feel for Jade, but do we really think Chris wanted to write a "Bachelor" blog for People magazine? Are we really to believe the Iowa farmer penned the piece of his own volition, without some help from an editor? And as he is confronted by his clumsy word choices, shaking his head in speechless regret, it becomes clear that there can be no relief for Jade here, no emotional justification for her suffering at the hands of a rigged system. The torment of "Women Tell All" is the logical conclusion of having a relationship played out in the open, and in an artificial and deliberately hostile environment.

But here's the silver lining (that doesn't involve a rose)
This season's "Bachelor" does have one winner, and it's not the woman Chris ends up shipping off to Iowa as his bride. Rather, the only woman who really comes out looking good here is Ashley S. -- the kooky nut-job/genius troll/performance artist who doesn't give a damn about the show and its rules, who shrugged and smiled when she got eliminated, and spent most of her tenure on the show picking pomegranates, talking to cats, slinking off to watch the crew, and babbling like a delightful lunatic. Ashley S. knows that the only way to come out on top is to play the show, instead of letting the show play you. So unlimited roses for you, Ashley S., for gaming the system. See you on "Bachelor in Paradise"!