Why conservatives refuse to believe Obama is Christian

Scott Walker is the latest Republican to question the president's faith, and he's not just speaking to the fringe 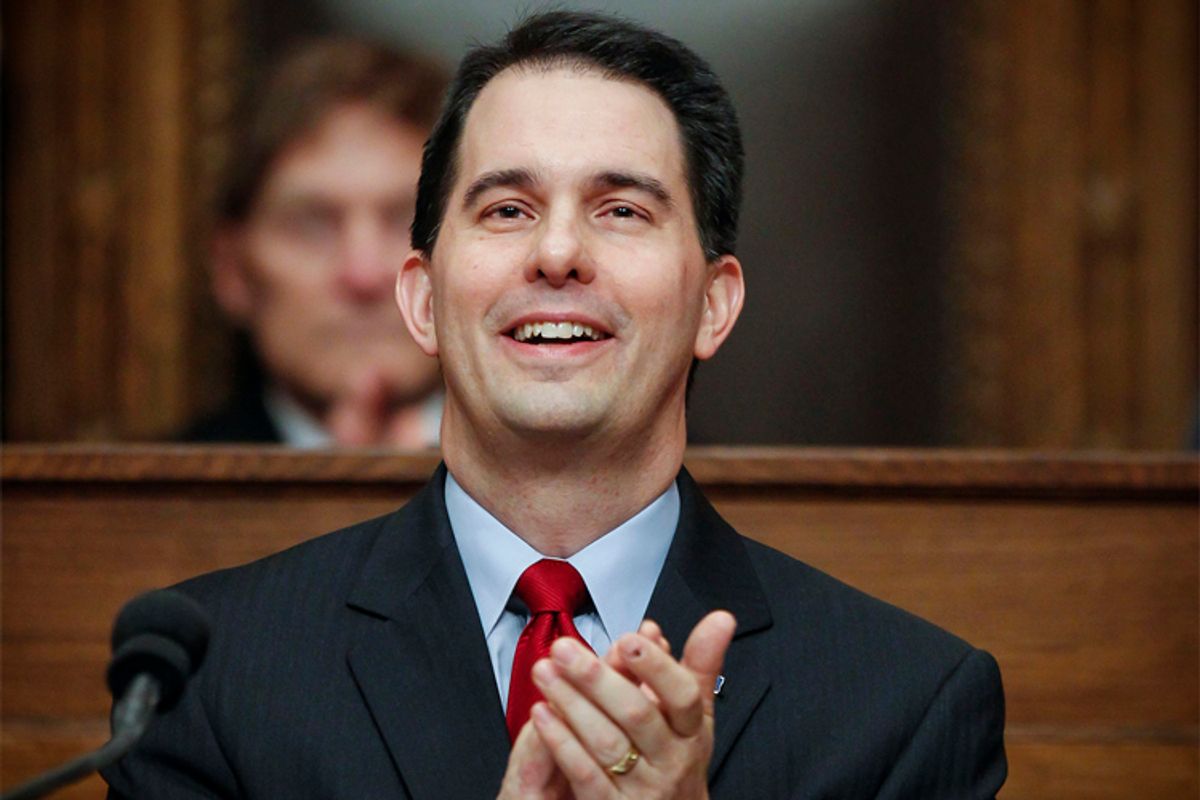 Alex Theodoridis, a political scientist at the University of California, Merced, conducted a survey last fall of Americans’ understanding of President Obama’s religious beliefs. Remarkably, he found that in response to the question, “Which of these do you think most likely describes what Obama believes deep down? Muslim, Christian, atheist, spiritual, or I don’t know,” 54 percent of Republicans said Obama is Muslim. Only nine percent said he is Christian.

The percentage selecting “Muslim” is notably higher than in other polls conducted on this topic. This difference likely depends on how the question is phrased.

Previous survey questions about Obama’s religion tend to sound like a pop quiz — such as “do you happen to know the religious faith of Barack Obama?” But by asking “what Obama believes deep down?” I was intentionally granting respondents license to stray from the pesident’s self-reported Christian faith. This reveals a prevalent willingness to distrust this pesident or categorize him as “the other” in terms of religion.

Of course, respondents could also be “cheerleading” — using a survey question to express their general dislike of Obama rather than a genuine view about his religious faith.

But, if these results were largely driven by anti-Obama cheerleading, we should expect more respondents, especially Republicans, to choose the very unpopular category of “atheist.” Relatively few do so.

Previous ruminations on the Obama-is-a-secret-Muslim theme have suggested various sources for it: ignorance, Fox News, racism, too much World Net Daily in your diet.

Theodoridis’ post was inspired by Wisconsin Governor Scott Walker’s remarks that he didn’t know whether Obama is a Christian. But do other elected Republicans suggest that Obama is not only not a Christian, but a Muslim? I ran a search in the Congressional Record for recent floor speeches in which the word Islam or Islamic and the President appear. This is snapshot, of course, and the number of constituents who actually listen to these speeches is infinitesimal. But if elected Republicans aren’t afraid to question Obama’s religious commitments for the permanent record, think of what they might say to constituents in smaller settings, or the well that they are drawing from when they make remarks in Congressional sessions for which they receive no pushback, and in fact receive encouragement.

Republicans drew from recent conservative complaints that Obama refuses to say that Islamic State and other terrorist groups are “Islamic,” that he doesn’t take the threat of terrorism seriously, and he is insufficiently protective of American exceptionalism.

On February 24, 2015, Rep. Mark Walker (R-NC) said on the House floor that his constituents “shared with me their frustration at the ambiguous language from this administration in describing the evils of radical Islamist terrorism,” and that he himself has “grown weary at the timidity” of Obama, who “continues to be defensive, at best.” He went on:

At first glance, the silence appears to be passive or poor leadership. But I am inclined to believe that the President’s posture is not one of weakness but, rather, an intentional directive in both rhetoric and action. It appears that his promise to take our country in a fundamentally new direction is being played out in realtime. Instead of defending our liberty and our way of life, which is the most charitable in the world, our President seems to scoff at the belief that our country has been uniquely blessed by God.

I would be remiss today if I did not pause and remember our Egyptian Christian brothers in the recent barbaric attacks in Libya. ISIS murdered innocent husbands and fathers who clearly died for their faith and their beliefs.

Just this morning, we hear further reports out of Syria that Islamic State militants have abducted dozens of Christians, including women and children. Weeks prior, the President chastised the Christian community for getting on their judgmental high horses. Yet, in describing our martyred brothers from Egypt, the President refused to even utter the word, “Christian.”

The undermining of our beliefs has become an issue with this President.

Contrary to Walker’s statement, which echoes a claim circulating in conservative circles that Obama did not identify the Coptic victims of the Islamic State massacre as Christians, at last week’s summit on countering religious extremism, Obama noted that that Islamic State’s “slaughter of EgyptianChristians in Libya has shocked the world.” Notice, in Walker’s speech, the juxtaposition of the statement that Obama “seems to scoff at the belief that our country has been uniquely blessed by God” (i.e., he’s not a Christian) with his own remembrance of the murdered Egyptian Christians “who clearly died for their faith and their beliefs.”

Some of the floor statements come from ardent Christian supporters of Israel, who contrast Obama negatively with Israeli Prime Minister Benjamin Netanyahu.

In a February 5, 2015 floor speech, Rep. Trent Franks (R-AZ) called Netanyahu “one of the most prescient voices that we have in the entire world to address some of the subjects and some of the dangers that face the United States of America.” In contrast, Franks claimed, Obama “chooses to listen to these mysterious voices of those who did not vote in our Nation’s election,” yet “has sought to go after and silence” Netanyahu. (He did not specify whose “mysterious voices” were whispering in Obama’s ear.) Franks questioned whether Obama is “so naive or, worse, so arrogant as to believe that we can have any type of credible, diplomatic agreement” with Iran.

Rep. Ted Poe (R-TX), in February 2, 2015 floor remarks, asked, “this administration also refuses to say that we are at war with radical Islam. There is so much sensitivity in the White House over its statements that one is puzzled to wonder: Why are they sensitive about calling terrorists ‘terrorists?'”

The next day in a floor speech, Rep. Louie Gohmert (R-TX), after describing atrocities committed by terrorists, added, “I guess if you are part of this administration, you shouldn’t consider that to be all that radical because this administration, under their watch, with Commander in Chief Barack Obama, had orders given to remove crosses from the chapels on our military installations.” (Gohmert repeats this claim, despite it having been debunked in 2013; the military, according to FactCheck.org, “has a longstanding policy against permanent religious symbols being attached to military chapels.”) In the speech, two days before the National Prayer Breakfast, Gohmert noted Obama’s upcoming appearance, adding, “I am greatly appreciative of the President’s espoused faith.” (emphasis mine).

In a January 14, 2015 stemwinder, after laying out a litany of Obama’s alleged sins in failing to recognizing “that radical Islam is a threat to our very existence and way of life,” Gohmert delivered a brief lecture on how Christians are supposed to act (and govern):

I have Christian friends that say: Yes, but as Christians, we are supposed to turn the other cheek. That is as individuals. Individual Christians should live out the beatitudes as Christ gave them. But the government has a different role. If you do evil, you should be afraid because the government, within the bounds of Christianity–Romans 13:4–is supposed to punish the evil, eliminate the evils, and protect your people. I don’t try to convert anybody using my position in government, but for those who misunderstand Christian teaching, you need to read Romans 13.

Romans 13 is about submission to governmental authority, and the particular verse Gohmert cited reads: “For the one in authority is God’s servant for your good. But if you do wrong, be afraid, for rulers do not bear the sword for no reason. They are God’s servants, agents of wrath to bring punishment on the wrongdoer.” In other words, Obama isn’t punishing (purportedly Islamic) wrongdoers; he therefore doesn’t understand what Gohmert believes to be biblical imperatives for governing. Draw your own conclusions.

Of course Poe, Franks, and Gohmert represent the far right flank of their party, but their fellow Republicans don’t dispute them. As Theodoridis theorizes, Scott Walker is a “moderate” on the spectrum of misrepresenting Obama’s religion because he merely said he didn’t know whether Obama is a Christian. But you could argue that Poe, Franks, and Gohmert never explicitly said Obama is a Muslim. Yet according to Theodoridis’ research, a majority of Republicans think he is.