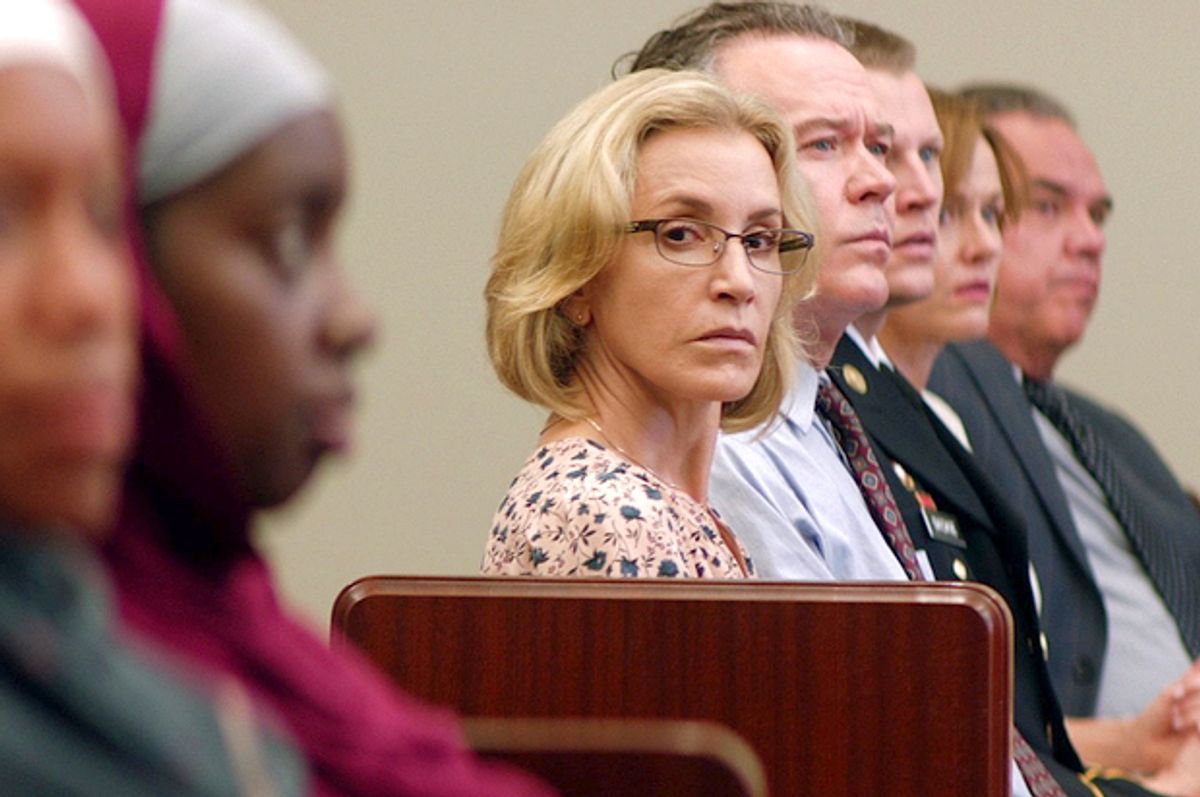 ABC was already the strongest network of the 2014-2015 season. The broadcast giant—acquired by Disney, if you’ll recall, in 1996—has long been a heavy-hitter with drama, especially with the science-fiction suspenseful dramas of J.J. Abrams and soap-operatic melodramas from Shonda Rhimes. But its previous successes look tame in comparison to this season’s victory. ABC is the best broadcast network in America right now, in terms of the quality of its programming. With the debut of “American Crime" tomorrow, ABC has outright clinched the title. This is the broadcast network producing stunning programming that takes risks, in terms of representation, identity and storytelling styles; it’s the type of television that cable and Internet outlets started producing to lure viewers away from an increasingly stagnant broadcast model. Now ABC has programming blocks that feel like “Must See TV,” to use NBC’s old tag line; it showcases shows that are so subtle and smart and outside-the-box that they could be on HBO or FX. As a professional television viewer, what’s best about this is that all of this fantastic programming is almost entirely free—that’s the beauty of broadcast, and the only downside to excellent shows on cable or streaming. No subscription necessary; no special equipment needed. Just the TV and the remote and you, the viewer.

“American Crime” figures crucially into this reckoning. That drama, in particular, is the kind of show that brings viewers to HBO, FX, Showtime, AMC and now Netflix. Each of these networks has brought a big, prestige, star-studded drama to its viewers—one that promises subtle commentary, complex characters, and something to talk about at the water cooler the next day. When we talk about the golden age of television, this is what we talk about—shows like “The Wire” and “The Sopranos” from HBO; FX’s “Louie,” AMC’s “Mad Men” and Breaking Bad,” Netflix’s “House of Cards” and “Orange Is the New Black,” Showtime’s “Homeland.” A lot of their rise and success has come from seemingly minor developments, like the widespread adoption of digital production techniques that made cinematic effects cheaper and easier to do for television. Others are major issues, like the film industry’s difficulty justifying middlebrow films from a budgetary standpoint, leading talent both in front of and behind the camera to flock to prestige TV. And some are the curious loopholes of television: Broadcast is governed by stricter decency rules than subscription-based networks. Even if ABC wanted to air a show that realistically and completely portrayed sex, the network isn’t allowed to.

With “American Crime,” ABC has produced a prestige drama within the bounds of what broadcast television can do, and if it has been tooled to be more accessible than an arty crime drama on cable, it’s hard to tell how. The drama is not perfect, but the ambition behind it is breathtaking. “American Crime” tells the story of a murder in Modesto, California, through the fragmented perspective of a collection of people who are all affected by the crime. The storytelling style has a sense of investigation to it, but this is not a whodunit; it’s an examination of crime and punishment in this country, from investigation and arrest to arraignment, trial and incarceration.

As if the scope of the show weren’t enough, “American Crime” ups the ante with surprisingly affecting directorial choices. Each character is isolated in his or her own viewpoint, especially in the first episode; a high-pitched noise like a ringing in your ears sometimes drowns out conversation, as the character on-screen—whether that’s an accused criminal’s father or an assaulted woman’s mother—has to handle the numbing horror of the present tense. Moments cut off seemingly mid-scene—mid-sentence, even—as a way of exacerbating that sense of fragmentation. Flashbacks crop up unbidden, and then, in just literal flashes—victim Gwen on her wedding day, victim Mark Skyping in from active duty in Iraq. And crucially, no particular perspective is privileged over another. The victims’ parents get about as much screentime as the perpetrators of the crime. This is not a show that offers simple conclusions. To borrow an observation from David Sims at the Atlantic, “American Crime” avoids manipulation, both in terms of exposition and in terms of sketching out its cast of characters. We are not simply told how the murder happened; details filter out, scene by scene, person by person. We are not, either, simply informed that someone is a racist, or a liar, or a drug addict; only time will tell, and no one’s story is cut-and-dried.

Showrunner John Ridley—who won an Academy Award in 2014 for his adaptated screenplay for “12 Years a Slave”—brings that film’s quiet, ruthless presentation of facts to “American Crime”; actress Felicity Huffman stands out in the cast for particularly embodying contradiction as the bigoted, grieving mother of a murdered man. The audience is forced to sympathize with her horror, but at the same time, cannot help confronting her limitations. Another Oscar winner, Timothy Hutton, plays her estranged husband, and Benito Martinez—most recently in “House of Cards”—brilliantly brings the embarrassed father of an arrested teenager to life.

“American Crime,” like a great deal of ABC’s programming slate, is also incredibly racially diverse, especially for broadcast programming. As Pilot Viruet outlines in Flavorwire, this season has, across the board, seen new programming that showcases points of view outside the mainstream. But it’s worth observing that almost every show she discusses is an ABC show, with the exception of the CW’s “Jane the Virgin” and Fox’s “Empire.” “Black-ish,” “Fresh off the Boat,” “Cristela” and “How to Get Away With Murder” have all found astonishing success in a season where NBC canceled almost every comedy pilot it introduced and CBS is still stuck in the thrall of Chuck Lorre’s style.

At least some of the network’s success is about who they are choosing to make part of the team. ABC’s proving itself to be a network willing to employ diverse showrunners not just along racial lines, but across gender and creative styles, too. Iranian showrunner Nahnatchka Khan is not just Iranian, she’s also a creative professional with a particular vision that characterizes not just “Fresh off the Boat” but her previous project, “Don’t Trust the B— In Apartment 23.”

But the rest of ABC’s success is coming from being willing to look like, and respond to, a diverse, multifaceted audience. Right now, ABC is a network that has something for nearly everyone; with “American Crime” slotted into the role of prestige drama, that is the case more than ever. I know, I sound like a Disney press release right now! But if this is the mega-corporation that owns "Star Wars," Marvel, ESPN and Pixar... isn’t it encouraging to know that they’re doing their job well?