Jeb Bush and Hillary Clinton are fighting to woo the 1 percent. But here's what happens to the candidate who wins 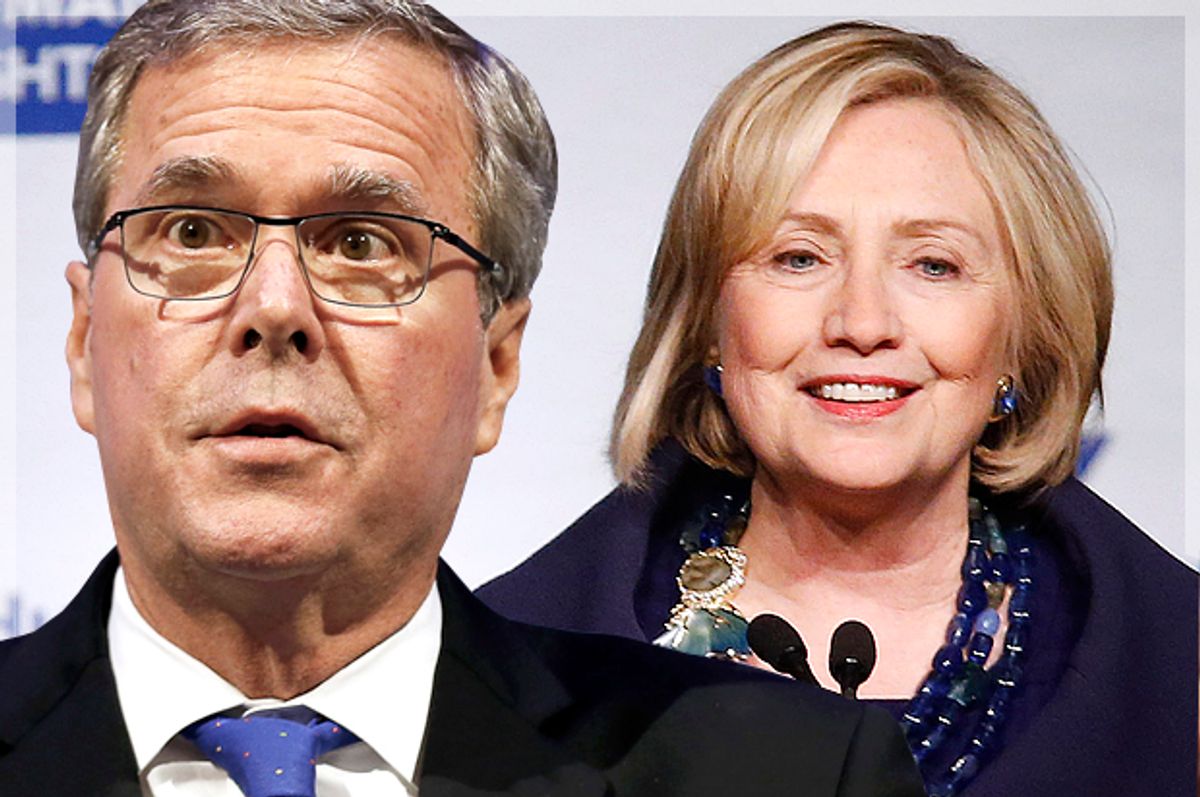 In case you had any doubts, let them burden you no longer — the 2016 presidential election has begun. The signs are everywhere; from Gov. Scott Walker’s flip-flop on immigration to Jeb Bush’s establishing a super PAC to the media’s churning out stories that make Hillary Clinton look slippery if not outright corrupt. At this rate, ponderous and chin-scratching articles about the Democrats’ problems with the white working class should be just on the horizon.

Perhaps most tellingly of all, though, is this Tuesday report from Politico on the subterranean fight being waged between Bush and Clinton right now to earn the support of the most important people in American democracy. Not the voters, of course. And not the shadowy power-players who run the political parties from behind the scenes. These are the people who really count: the men and women of Wall Street. More specifically, those who work at Goldman Sachs.

Yes, according to Politico’s Ben White (who is exceedingly well-sourced on “the Street,” if nothing else), the front-runners for the respective parties are currently jockeying to win the hearts and minds of Goldman’s rank and file as well as its elites. Bush is planning to make yet another sojourn to New York next week, White reports, and has “a pair of events scheduled … with current and former Goldman executives.” Clinton, for her part, is not quite as far along on the shadow campaign trail as Bush. But she’s already made a few lucrative visits to Goldman since leaving the State Department, and no doubt will soon do so again.

And in marked contrast to the official primary on the Democratic side — and perhaps on the Republican side, too, if Walker keeps saying dumb stuff like this — the one for Goldman is neck-and-neck. According to White, Wall Street sees both Bush and Clinton as “centrists” who will “cool some of the scorching anti-banker rhetoric and policies emanating from the Elizabeth Warren wing on the left” as well as the “Tea Party movement on the right.” The way Wall Street sees it, both Bush and Clinton can be counted on to “help restore the reputation” of the financial industry and use the power of the presidency to oppose “big tax hikes on capital gains and more stringent regulation.”

But that’s not all, of course. The folks at Goldman Sachs are not only hopeful that Bush and Clinton will maintain the regulatory structure that’s served the 1 percent so well, White reports. They’re also feeling good about the chances that either candidate, if they were elected president, would work to ensure Sen. Elizabeth Warren isn’t able to slow or stop the rotations of the revolving door. As White puts it, Goldmanites expect both would “draw on Goldman’s executive ranks for expertise” when choosing bureaucrats and advisers. Call it the second coming of “Government Sachs”!

Because Bush and Clinton seem to agree on so much, you may wonder how they’re planning to differentiate themselves from one another during their $5,000-a-head fundraisers (or their $50,000-a-plate extravaganzas). On this point, White has less to offer. But I think I might have a good idea about what the Goldman primary is likely to truly be about. Instead of trying to persuade the bankers that theirs is the superior policy vision, these crypto-candidates will probably argue that they’re the better spokesperson for winning over the real customer here — you.

After all, what is it that Wall Street’s buddies over in Silicon Valley are so fond of saying? If you’re not paying for it, the product is you. Well, voting in the United States is generally (though hardly always) something you can do without paying any irksome entry fees. And so long as the U.S. is at least a nominal democratic republic, the president of the United States needs to be the candidate who won at least a plurality of the popular vote — although this rule is admittedly not hard-and-fast. Keeping in mind, then, that all the contestants in the Goldman primary basically agree on the issues, the only question for the folks at Goldman is whether they think Bush or Clinton delivers the better sales pitch.

So Bush, Clinton and anyone foolish enough to think there’s room in the Goldman primary for a third wheel have their work cut out for them. They’ve not only got to figure out a way to sell American voters a product they hate. They also will have to persuade the folks in Goldman that they’ve got what it takes to close the transaction before the customers have time to think twice. But I wouldn’t worry too much if I were them, because whoever the winner is will be able to draw upon the Goldman Sachs brain trust’s expertise — and nobody but nobody out there knows more than them when it comes to passing off a rotten deal.