From unconstitutional searches to racist emails, here are some of the most revolting findings 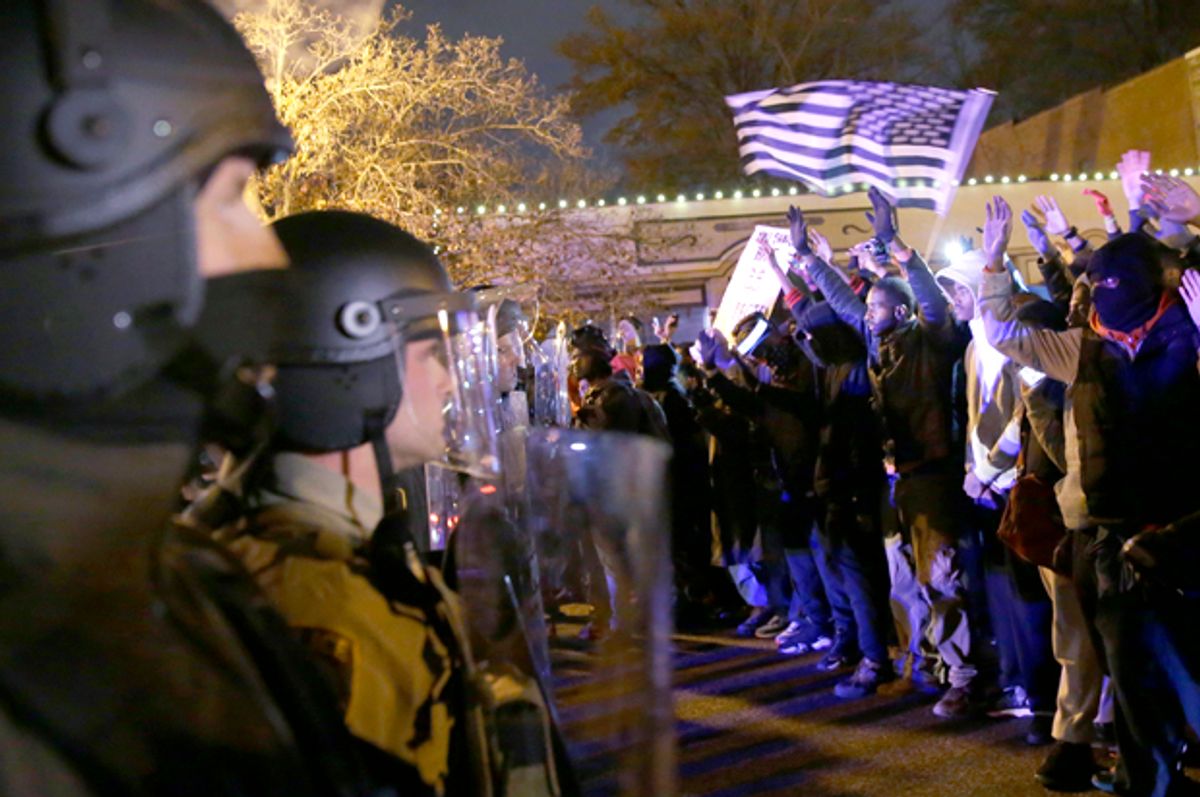 The Justice Department released its full report on the Ferguson Police Department on Wednesday, seven months after Officer Darren Wilson shot and killed unarmed African American teen Michael Brown -- an event which galvanized demonstrators against racial bias in policing and triggered the Justice Department's probe. Though a grand jury decided not to indict Wilson and the Justice Department opted not to bring federal civil rights charges in the case, the department's report makes clear that Wilson was part of a local law enforcement system tainted by racial bias, abuses of citizens' constitutional rights, excessive use of force, and an over-reliance on fines and fees to generate revenue.

Such systemic injustices poisoned police-community relations in Ferguson, where 67 percent of the population is African American but the police force is 94 percent white. The Justice report depicts a law enforcement system in deep need of a overhaul -- and offers a horrific look at how white supremacy functions in 21st-century America.

Below, Salon looks at eight of the most revolting revelations in the report.

1. Over-reliance on fines and fees for revenue -- and pressure to generate more

For years, Ferguson has relied heavily on law enforcement fines and fees to keep city operations running, with the percentage of city revenues generated by such fees gradually increasing over time. In 2011, fines and fees collected by the municipal court accounted for $1.38 million of the city's $11.07 million in general fund revenue, rising to $2.46 million by 2013. Last year, the city budgeted for the court to collect $2.63 million in revenue.

After sales taxes, traffic fines constitute Ferguson's second-largest source of revenue. City officials made no secret of their desire to generate more revenue from stops and other law enforcement-imposed penalties, increasing the budgeting for court-generated revenue and stepping up pressure to impose tough penalties. In April 2014, for instance, the finance director of Ferguson wrote city officials to recommend an "I-270 traffic enforcement initiative" in order to "fill the revenue pipeline."

The fees can be financially punishing for the city's many poor residents, many of whom can't afford to pay the burdensome penalties assessed on them -- including $302 for a manner of walking violation, $427 for disturbing the peace, and $777 for resisting arrest.

While black people account for 67 percent of the population in Ferguson, they comprise 85 percent of vehicle stops, 90 percent of citations, and 93 percent of arrests.

Despite disproportionate targeting of African Americans for searches, the report found, police were actually more likely to find contraband on white people.

In one summer 2012 case, an officer approached a 32-year-old black man cooling off in his car, on the grounds that his windows were more darkly tinted than city regulations allowed. But "[w]ithout cause," the report states, the officer went on to accuse the man of being a pedophile; the officer would not allow the man to use his cell phone, subjected the man to a pat-down, and demanded that he be allowed to search the car. The man refused the latter request, prompting the officer to point his gun at him and arrest him.

The case fit a larger pattern of police conducting searches without probable cause, in violation of the Fourth Amendment.

Despite federal court rulings that recording police activity is constitutionally protected under the First Amendment, an officer wrestled a 16-year-old African American boy for his cell phone after the teen recorded the officer's traffic stop of his mother; more officers later arrived and arrested the boy, his mother, and his brother.

In another case, a man was arrested for failure to comply after attempting to record his traffic stop; the man had been pulled over on a tail light violation. Once the man was booked into jail, the officer told a jail official that the man was arrested because he "watches CNBC too much about his rights."

5. Tasing a woman for not removing her bracelets

The report exposes widespread excessive use of electronic control weapons (ECWs) like tasers. In a 2010 case, a lieutenant used such a weapon in "drive-stun mode" against a Ferguson City Jail inmate who did not remove her bracelets after being asked to do so; the woman never posed any physical threat, the Justice inquiry states.

The case illustrated a larger problem plaguing the law enforcement system, where officers and their supervisors "seem to believe that any level of resistance justifies any level of force," the report says.

Officers deployed canines against low-level, nonviolent offenders, including minors, according to the report. In December 2011, officers allowed a canine to bite an unarmed 14-year-old African American boy who was waiting at an abandoned property for his friends. Officers justified the arrest by stating that the boy had a committed a burglary -- if anything, the boy had only trespassed, Justice finds -- and asserting that the boy was hiding from officers and was warned that the dog would bite him if he continued to do so.

The boy says he never hid from officers and did not hear any such warnings.

While court rulings hold that an individual's mental impairments must factor into use-of-force decisions, officers used violent force against mentally impaired people in a number of cases. In a notorious 2011 case, officers shot and killed a man who was running nude through Ferguson and pounding cars while proclaiming that he was Jesus; the man was schizophrenic.

Two years later, officers approached a "suspicious" man spotted running in public pushing around a shopping cart. The man, who was intellectually disabled, pulled away when officers patted him down. In response, "[t]he officers drive-stunned him in the side of the neck."

Underscoring the deep-seated racial prejudices and bias that plagued the local law enforcement system, officials sent numerous racist emails over the years, the probe finds. An email written shortly after then-Sen. Barack Obama's 2008 election the presidency said that he would not last long in the Oval Office because "what black man holds a steady job for four years." Another email depicted the president as a chimpanzee, while others took digs at Michelle Obama and stereotyped racial minorities as shiftless welfare recipients.

"[E]ach of these email exchanges involved supervisors of FPD's patrol and court operations," the report states. "The racial animus and stereotypes expressed by these supervisors suggest that they are unlikely to hold an officer accountable for discriminatory conduct or to take any steps to discourage the development or perpetuation of racial stereotypes among officers."