As Ferguson’s racist police practices are revealed, an ex-CIA director gets a slap on the wrist. And that's not all 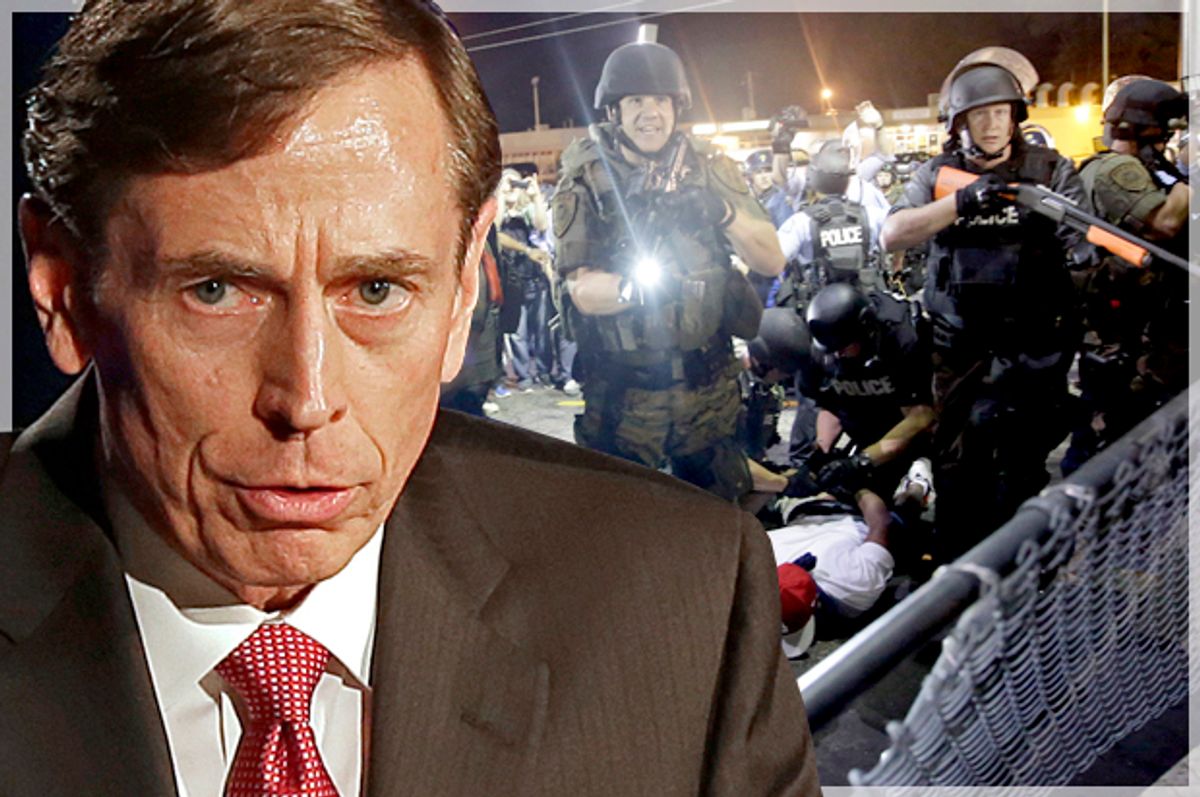 The Justice Department is expected to announce Wednesday that it won’t bring civil rights charges in the shooting of Ferguson teen Michael Brown by police officer Darren Wilson last August. But Justice has done something important with its study of police practices in the depressed suburb of St. Louis: it has meticulously shown that police routinely violate the constitutional rights of black residents.

The Justice Department report tells us everything residents and reporters have told us over the last six months, as we discovered this racially fractured territory where African Americans make up the majority but hold only one elective offices, and there are 3 black cops among the 53 on the force. Still, the new data sears: African Americans make up 67 percent of the population but more than 90 percent of arrests; they are more likely than whites to be searched, but less likely to be carrying contraband. And the city has a clear pattern of using fines for small infractions to fund its operations, so that residents wind up going to jail over misdemeanors when they don’t have the cash to pay penalties.

Speaking of misdemeanors: That’s what former CIA director David Petraeus pled guilty to, facing charges that he shared classified information with his lover and biographer, Paula Broadwell. Under the terms of the deal, he won’t face prison; instead he’ll get two years probation and pay a $40,000 fine – a fine he can certainly afford, unlike the low-income residents of Ferguson, for whom fines are often a gateway to prison.

We often get stark reminders that we have two justice systems, separate and cruelly unequal. One is for the wealthy and powerful, the other for the poor and weak and, particularly, for African Americans. I’m not going to say “people of color” there, although other non-white groups struggle with police injustice. There’s something so through-going about the anti-black racism of Ferguson that it can’t be described in bland racial euphemisms.

How else to account for the racist jokes spread by the police department: that President Obama wouldn’t make it through his first term because “what black man holds a steady job for four years?” Or the regular depiction of African Americans as monkeys? The chuckles about a black woman’s abortion as crime control? Why else would 95 percent of residents stopped for jaywalking happen to be black? Ferguson officials will now have to negotiate a settlement with the Justice Department and commit to changing its practices, to avoid a lawsuit for violating its black residents’ constitutional rights.

For his part, David Petraeus negotiated his misdemeanor settlement in order to avoid a messy trial that would have revealed embarrassing details about his relationship with Broadwell. (He is still married.) Amazingly, Petraeus gets to stay out of jail and avoid the humiliating revelations of a trial. The $40,000 fine won’t pinch much, either. According to the New York Times, “The deal also ends two years of uncertainty and allows Mr. Petraeus to focus on his lucrative post-government career as a partner in a private equity firm and a worldwide speaker on national security issues.”

The Times also notes that Petraeus “received a light penalty” compared to others caught in the Justice Department’s crackdown on leaks: Stephen Kim went to prison for a year for sharing classified information with James Rosen of Fox News; an FBI bomb technician got four years in prison for discussing classified data with reporters. Other cases are ongoing.

That’s what good lawyering – along with wealth and whiteness – will do.

I don’t begrudge Petraeus his legal representation. I’m just stunned by how passively the nation accepts the kind of police practices, in low-income black neighborhoods and towns and cities, that come close to criminalizing daily life, trapping African Americans in a web of penalties and consequences that can have lifelong impact.  Or cost them their lives: Mike Brown's clash with Darren Wilson began when the officer ordered him to get out of the street and onto the sidewalk, another of the infractions that disproportionately ensnare black residents.

The movement to get justice for Brown brought these practices to light; the Justice Department’s report catalogues and criticizes them and labels them unconstitutional. It will take a lot more work to change them.