Boehner's destructive paranoia: Why the reason for his shutdown stunts is based on a lie 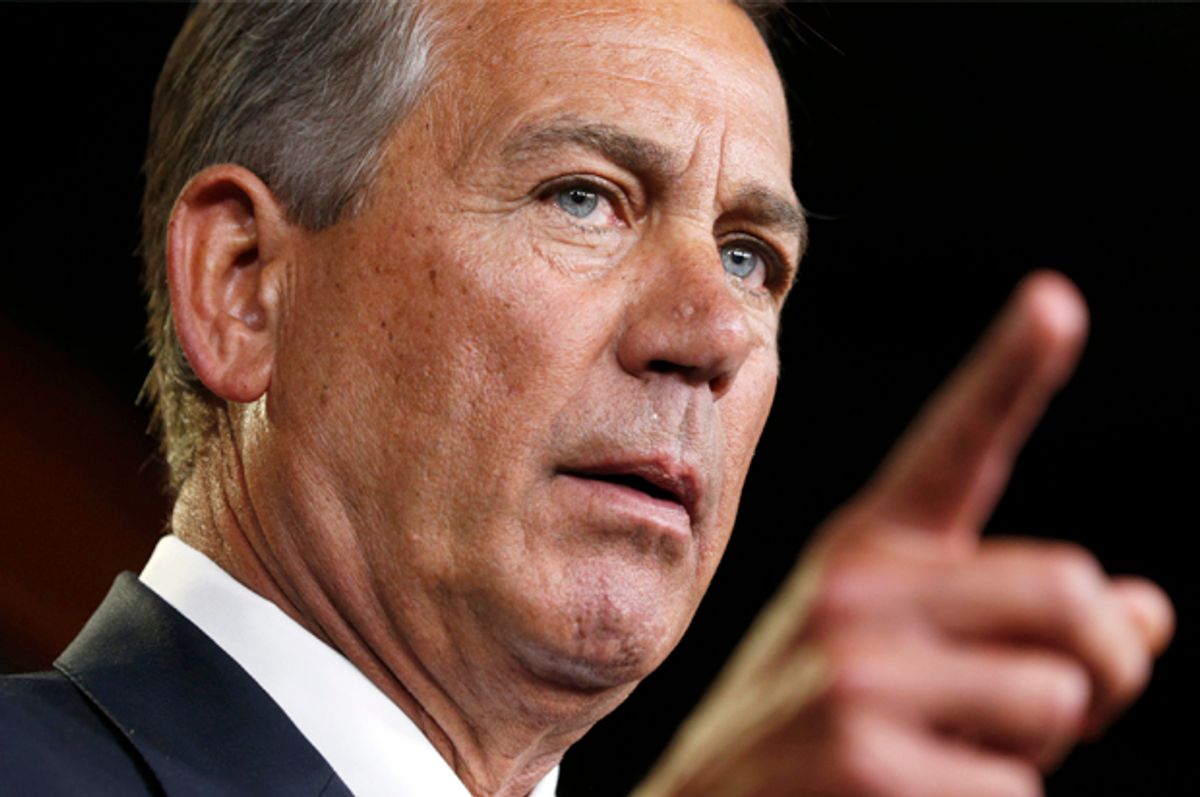 And so it was, that John Boehner folded. We'd figured he would have held out until Friday, but Boehner decided to get it over with on Tuesday so that coverage of Benjamin Netanyahu's speech would blot it out. Not a bad idea. Maybe the only decent idea John Boehner has had in some time.

The Department of Homeland Security will now join the other departments in being fully funded through the end of FY2015. Run along now, DHS, and play with your friends! John Boehner cut his losses about a week after Mitch McConnell cut his and about three months after both should have opted not to pick this fight in the first place. The Speaker passed the bill to fund DHS without any immigration-related riders with nearly unanimous Democratic support but only about one-third support from his own Republican conference.

Call it what you will, but bringing up this vote was a clear violation of right-flank's own "John Boehner must never be mean to us" rule. The Cool Conservatives Club is furious. So Boehner's finished, right? You're dumping him? Day/time?

Ohio Republican Rep. Jim Jordan, who heads the House Freedom Caucus -- a group expressly established to force Boehner to the right -- was pressed by CNN's Dana Bash on "State of the Union" Sunday about a potential effort to remove Boehner.

"That's not going to happen," he said, signaling the group may be unhappy but they aren't at the point of launching a coup.

Oh. Boehner's job is safe, just as it has been following all the other times he caved and used Democratic votes to pass vital legislation.

The excuse that Boehner's allies always use to explain why he repeatedly puts the nation through this trauma is that his speakership is on the line if he defies conservatives. The problem is not that this is selfish. Representative politics is selfish: protecting your self-interest is supposed make you receptive to the demands of those you represent.

The problem with this excuse is that it's been disproven. Consider the data points! Boehner always ends up defying conservatives when he's out of options and time to stall, and yet here he is, still the Speaker. House conservatives, by whom we mean members who may or may not be conservative but like to scream tactical nonsense, get all worked up about the terrible consequences if Boehner caves, and when he does, they... move on with the rest of their day, just like every other person on this godforsaken planet.

This suggests that Boehner's job is never really on the line, so he'd be better off not building up expectations for months at a time before arriving at the inevitable result. He would recognize that Republicans would lose the next bout of brinksmanship and cut his losses at the beginning, saving everyone the time and humiliation.

But maybe Boehner does have to go through the theatrics. That he and the conservatives have a wink-wink agreement, where he gets to keep his job in the end but only after he wastes a ton of time catering to them. If he caved right away, the conservatives might actually feel pressure from constituents to go through with a coup. And who would that help, aside from America? The conservatives need John Boehner there as a constant against whom to forge their own identities as anti-Boehners. Without John Boehner, what would they be?