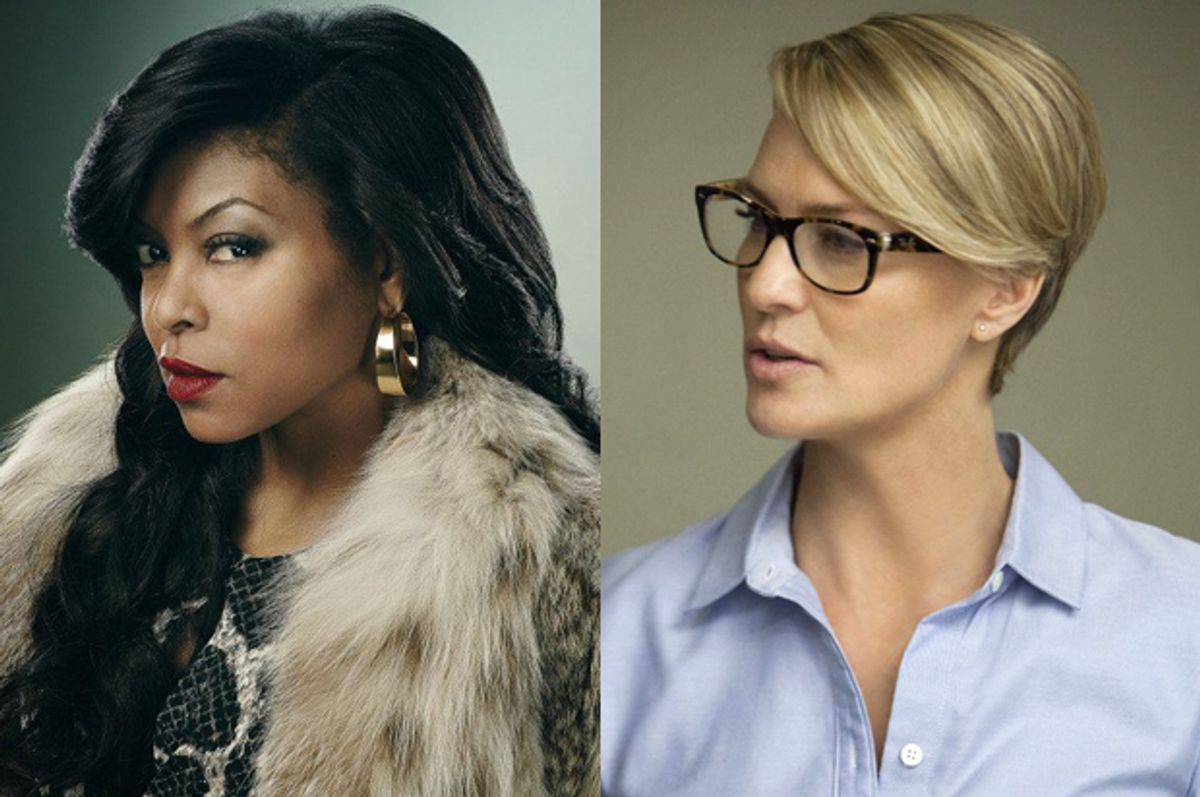 Like millions of other Americans, I spent much of last weekend binging on the new season of “House of Cards.” I welcomed the Underwood’s return like a catch-up session with old friends. I was anticipating how the the couple’s discipline, calculation and caustic one-liners had evolved for the new season, but what was particularly excited about the evolution of Claire’s closet -- which only improved now that she's First Lady of the United States.

As a kid, my sister and I had a game: we’d watch TV or a movie and race to call dibs on whichever character we imagined represented us. Most often this included characters like Kimberly, the pink Power Ranger, and Elle Woods from “Legally Blonde.” We admired strong female characters, and did what we could to emulate the outfits. It never occurred to me that the clothes were costumes per se, but rather necessary details to achieve whatever it was the character was supposed to deliver.

Television today offers some of the most individualizing styling and fashion, making pieces like Claire Underwood’s tailored sheath dresses and close-cut crop almost as recognizable as Jennifer Aniston’s “Rachel” cut on “Friends.” Many of today’s most successful programs depict powerful women like Robin Wright’s Claire Underwood in situations that threaten to derail the influence the characters have worked tirelessly to achieve. Costuming is paramount in this regard in that it creates a psychological implication that as long as the character’s outfit is put together, the character (hopefully) won’t be coming undone.

In celebration of television’s most powerful women, here’s a look at some of the characters and their skillfully selected styles.

The first time I took notice of Underwood’s character she was wearing a white button-up and high waisted black skirt. It’s a typical outfit you’d see everyday in D.C., but the delivery was something special. Underwood takes minimalist dressing to a new level with neutral colors, clean lines and flattering silhouettes. The muted color palette succeeds in ensuring that her wardrobe isn’t distracting, but rather an aid to calling attention to whomever she’s speaking with.

There was a scene at the end of Season 1 when Kate Mara’s Zoe Barnes tries on a dress from Claire’s closet, which obviously wasn’t going to fit, given their different heights and body types. That moment offered a powerful realization: Barnes would never fill the shoes (or dress) of influence that Claire Underwood embodied. Underwood’s style propels her to being seen and heard, which is something the oft dressed-down Barnes died trying to accomplish.

I couldn’t write about powerful and stylish women in television and not write about Olivia Pope. I mean, those trench coats alone are enough to show someone that Kerry Washington’s Pope is a lady who means business. It’s hard enough being a woman in a predominantly male working environment, but Pope’s power dressing serves as a coat of armor. Pope stands out as a woman in a white coat or pants among men in dark suits, and appears more capable than she does celestial. She’s a force to be noticed and reckoned with, but only if you dare.

Of all the characters on “Orange is the New Black,” I think Fig, played by Alysia Reiner, is the most overlooked. Season 2 introduced us to the personal life of the Executive Assistant to the Warden at Litchfield, and managed to make her seem at once softer and more sinister than expected. She’s embezzled from the prison to fund her husband’s political campaign, and he won’t even sleep with her. She’s hungry for power that's just beyond her reach. Her only island of influence is the prison, but even there she’s not respected. Fig can’t help but stand out in form-fitting shift dresses and Louboutins (remember the fit she threw when she stepped in gum?) among a sea of ill-fitting prison uniforms. To the other characters, she’s become a  joke, even lampooned in one of Daya’s cartoons for the inmate newsletter.

Unlike characters like Underwood or Pope, Fig’s outfits never seem quite believable. The hair is a little too big, the heels a little too high. She’s dressing for a role not even she entirely believes she can fulfill.

If I ever find myself in a dangerous situation, I hope to God that someone like Cookie is there to help get me out through it. As the beautiful and brash diva on “Empire,” Cookie, played by Taraji P. Henson, commands attention in fierce prints and geometric designs. Cookie’s character is still carving out her place in this world, and ensures that everyone around her pays attention. Her style is as understated as stilettos clacking against a tile floor -- and it totally works for her.

Cookie doesn’t play by anyone’s rules, but opts to redefine her looks and her goals episode by episode instead. From animal prints to plunging necklines and tight leather pants, she’s a risk taker who doesn’t care about making mistakes socially or sartorially.

Geena Davis’ Dr. Nicole Herman on this season of “Grey’s Anatomy” soars above her colleagues in terms of skill and style. The ageless beauty stands out in fitted white coats paired with shift dresses tailored at the waist that deliver an added aesthetic appeal to her character’s self-assuredness that at times can read as arrogance.

Whereas most of the other women surgeons at Grey Sloan Memorial Hospital complete their rounds in scrubs, Converse Chuck Taylors and fairly disheveled hair, Dr. Herman rules with aplomb in towering pumps and tastefully hemmed dresses with coordinating lipstick. Her attention to detail when it comes to outfitting herself is matched by her meticulous dedication to teaching ingenue Dr. Arizona Robbins everything she can before undergoing surgery for a seemingly inoperable brain tumor.