When whistleblowers reveal secrets, it's a national crisis. When "leaders" leave them exposed, here's what's afoot 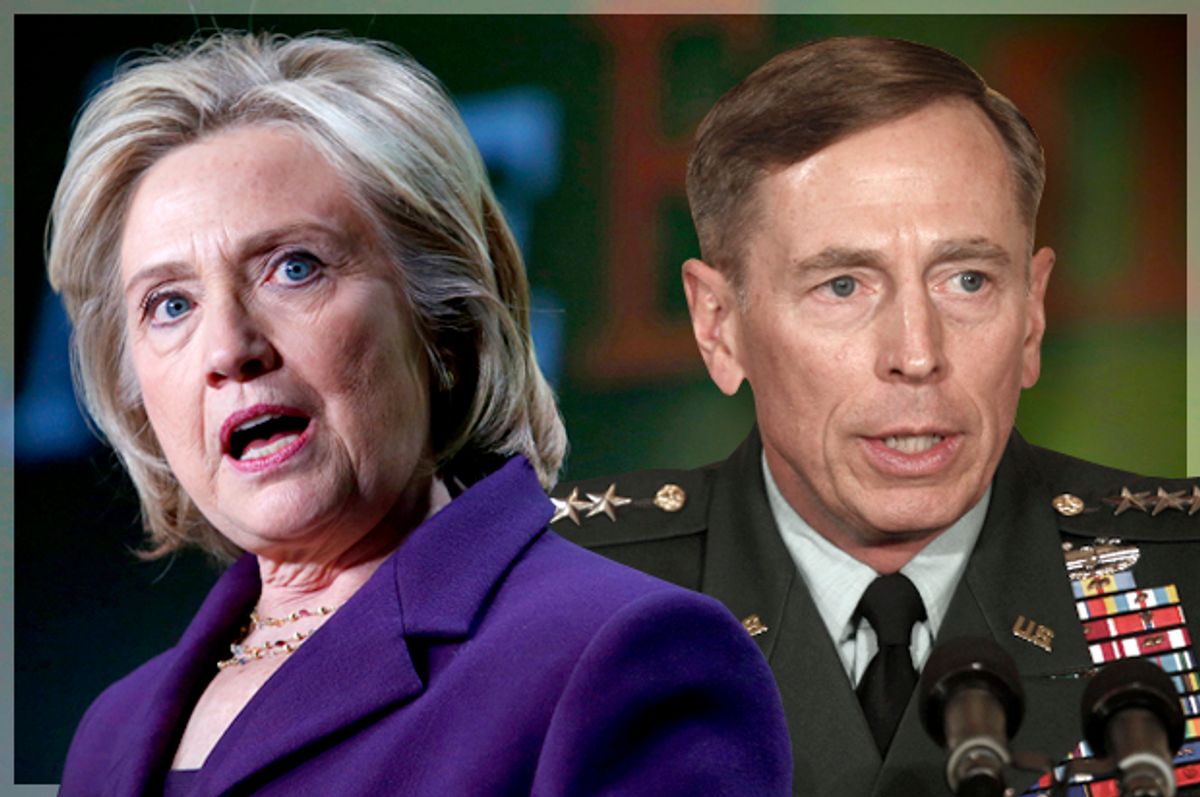 Maybe those sensitive secrets aren't so secret after all?

That's one of the conclusions American citizens might draw from two stories that broke this week: that former Secretary of State Hillary Clinton had conducted official State Department business using emails run through her own server, and that former CIA Director David Petraeus had kept 8 notebooks of unbelievably sensitive secrets in a rucksack in his home and, when she asked, had shared them with his mistress, Paula Broadwell.

Hints that Clinton was conducting business on private emails first came out two years ago, when a hacker targeted her aide, Sidney Blumenthal, and revealed he wrote to her at hdr22@clintonemail.com rather than at a State Department email. Then on Monday, the New York Times reported that she exclusively used that private email for State Department business. On Tuesday, the AP revealed that she ran the email off of  her own private server.

There are big governance reasons to be concerned that Clinton has been in control of all her official emails, including that the emails will get destroyed or hidden from FOIA and Congressional requests.

But there's also the question of whether whatever sensitive communications she had -- potentially including classified information -- were safe on a server run out of her Chappaqua home. While the State Department's own emails have been notoriously unreliable -- they have been compromised both in the WikiLeaks leak and in persistent hacks in recent years-- if foreign adversaries learned of her private server (and remember, it's very hard to hide metadata from someone who is looking), her communications would be even easier to compromise.

Among the things Petraeus recorded in 8 small notebooks he called his "Black Books" (and then let his mistress peruse for 5 days in 2011) were the identities of covert officers, deliberations at the National Security Council, code word protected programs, intelligence "mechanisms," and even conversations he had had with the President. Court documents show that in 2011, he stored the Black Books "in a rucksack up there somewhere," and in April 2013 when the FBI searched his house, they found the Black Books in an unlocked desk drawer in his study.

These are secrets that by definition should be kept in a special safe-like facility.

As with Clinton's emails, Petraeus' secrets were just sitting there for the taking, a trivial matter for Russian or Chinese intelligence services if they ever learned of and tried to get them.

The cavalier treatment of the nation's secrets by two people who have been steeped in the need to protect such secrets for decades -- and have applauded the prosecution of others like Chelsea Manning and John Kiriakou who have leaked information -- might suggest the secrets were never so sensitive after all. Maybe this system of secrecy is all just an excuse to prosecute whistleblowers and other annoying national security employees? Maybe this secrecy just serves to keep citizens in the dark about what our government is doing in their name?

And while both of those may, to some degree, be the case, that's not all that's going on.

Clinton's State department business and Petraeus' conversations with the President actually are sensitive -- to say nothing of the covert officers' identities Petraeus could have exposed. That's why Clinton and Petraeus' behavior is so telling -- because Petraeus' Black Books, at least, were filled with precisely the kinds of secrets that must be guarded to prevent people from being killed (we don't yet know how sensitive the communications Clinton had via email).

It's that the system is broken.

It's broken, in part, because the incentives behind classification have been perverted and the means to keep those secrets are so unwieldy that even insiders who buy into the system screw up -- as several insiders have laid out in response to this week's news. Former Defense Department lawyer Rosa Brooks laid out four reforms that might make the system less screwed up.

But the system is also broken because it has been permitted to become a tool the powerful use to control their own image (and thereby accrue more power). After the years-long witch hunts under her spouse's Presidency, Clinton might be forgiven for wanting to maintain complete control over her own communications (except for that whole bit about democratic accountability). But she is of course doing it to serve her own Presidential aspirations. Likewise, Petraeus has, at times, contemplated a Presidential run. Nor is he the first person to keep a CYA record of some of the most sensitive discussions he engaged in; Alberto Gonzales did the same, but got caught and investigated by DOJ's Inspector General for having done so. And as these indiscretions have become known, both figures have had veritable PR machines in places to respond -- either to defend or to engage in embarrassing tributes.

And the President who fluffed his own image with overstated claims about the Osama bin Laden raid has little incentive to hold either of his former cabinet members to account for manipulating secrecy to protect their own images. Nor is this a partisan affair, which generally ensures that no one wants to admit how much this secrecy serves image and power, not national security.

That, it seems, is the secret the elite really care to protect. Not covert operatives' identities so much as their own identities.