Anthony Kennedy's twisted logic: Why SCOTUS may get Obamacare right -- and wrong

Bizarrely, an obsession with states' rights -- over the needs of breathing humans -- may save Obamacare. Here's how 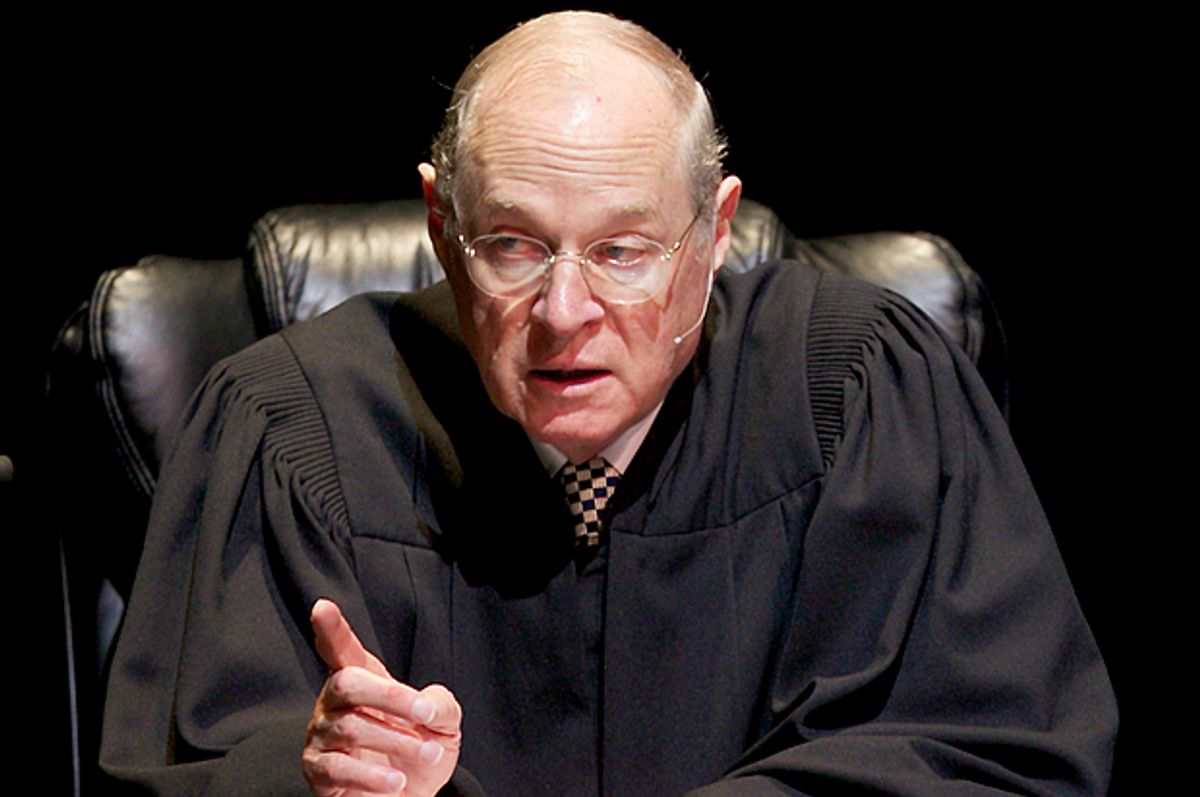 Nearly thirty years after he joined the Court, we are still getting to know him.  He surprised us three years ago when he abandoned his supposed moderation by unsuccessfully attempting to strike down all of Obamacare, relying on embarrassingly bad reasoning to adopt a cramped interpretation of federal power.  This week's oral argument in King v. Burwell, the case that threatens to gut Obamacare in 36 states, found him on the other side.  Obamacare seems likely to survive the latest episode in what Justice Elena Kagan called “this never-ending saga.”  But the reason is not the challenge’s devastating human consequences, nor the remarkably tortured reading of the statute upon which it relies.  It is the potential intrusion on states’ rights.  That is what Kennedy really cares about.

The case is in the Supreme Court because of a minor piece of clumsy drafting in the Affordable Care Act.  The ACA subsidizes health insurance for Americans who make up to 400% of the poverty line:  a single person whose income is up to $45,960, or a family of four with an income up to $94,200.  In the 2700 page law, there are two sentences that say that the subsidy is available for insurance bought “through an exchange established by the state.”  However, 36 states decided not to open exchanges.  The law provides that, when that happens, the federal government “shall” step in and establish and run “such” exchange, with the same authorities and obligations as a state-run exchange.  That most sensibly means that the federal government is to act as if it were the state, and that the federally run exchange is to be the functional equivalent of a state exchange.

The challengers, strangely oblivious to the massive destruction they are trying to engineer, claim that no subsidies can be given to anyone who lives in one of those states, because they would not be buying “through an exchange established by the state.”  If the argument is accepted, then about 4.5 million low- and middle-income workers in those states who are already receiving assistance from Obamacare will abruptly have their benefits cut off.  They will lose their insurance, and many of them will have to stop ongoing medical treatments or face crushing financial burdens – exactly the kind of thing that the ACA was intended to prevent.  The consequences will reach beyond those people.  The ACA prohibits insurers from discriminating against applicants with preexisting conditions.  That means that people could wait until they get sick to buy insurance, which would bankrupt the insurance pools.  That’s the reason for the mandate that was litigated three years ago:  if sick people are to be insured, so must there have to be young, healthy people as well or the pools will go into a death spiral, where rising rates drive out all but the sickest and insurers can’t write affordable policies and ultimately leave the market.  Even many unsubsidized people would lose their insurance.

In the last few months of this litigation – it’s been going on since 2013 – more fatal flaws in the challengers’ argument have been discovered., and this week they were much talked about.  First, the challengers’ interpretation implies that the federal exchanges, which the Act describes in considerable detail, would not be able to provide any insurance to anyone.  The ACA says that insurance may be bought in an exchange only by people who "reside[] in the State that established the Exchange." On the challengers’ reading, if a state has not set up its own exchange, then no such people exist.  As Justice Breyer observed, “the exchanges fall apart, no one can buy anything on them. . . . There are no customers.”  Justices Ginsburg and Kagan made the same point.

The challengers have suggested that the destructive effects of their reading were just what Congress intended:  states were threatened with the loss of the credits if they did not create an exchange.  On investigation, this story turned out to be pure fiction; not a single public official endorsed this interpretation when the law was being debated.  Conservative lawyers devised it long after the law was passed.  So the story has shifted:  the challengers now claim that the law’s language clearly implies that threat, no matter what anyone really intended.

Stipulate, for the sake of argument, that the law really makes such a fearsome threat.  That creates two problems, both arising out of federalism rules that Justice Kennedy helped create (in a series of 5-4 decisions in which he cast the deciding vote).  One is that, if Congress is going to place conditions on federal funding or disrupt the federal/state balance, it must do so unambiguously.  Here, Sotomayor noted, Congress is supposed to have been hiding “a huge thing in a mousetrap.”  Justice Kagan said that “there’s at least a presumption, as we interpret statutes, that Congress does not mean to impose heavy burdens and Draconian choices on States unless it says so awfully clearly.”  Justices Scalia and Alito tried to suggest that the statute was unambiguous, but Kagan correctly observed that “this took a year and a half for anybody to even notice this language.”

The second problem that has emerged in recent months is that Congress can’t commandeer states to administer federal programs – and if that is true, then it can’t elicit the same result with threats.  The Court thus held in 1997 that local officials can’t be required to conduct background checks on purchasers of handguns.  On the challengers’ reading, Kennedy observed, “the States are being told either create your own Exchange, or we'll send your insurance market into a death spiral.”  He was firm about the implications of that – and here is the most significant thing that anyone said in this week’s argument:  “It seems to me that under your argument, perhaps you will prevail in the plain words of the statute, there's a serious constitutional problem if we adopt your argument.”  Justice Sonya Sotomayor made the same point:  “Tell me how this is not coercive in an unconstitutional way?”  Three years ago, Chief Justice Roberts said that Congress could not tell states to accept a massive Medicaid expansion or lose all their Medicaid funds, because that would be “a gun to the head.”  If that was a gun, this is a howitzer.

When presented with such potential constitutional difficulties, Sotomayor observed, “we read a statute in a way where we don’t impinge on the basic Federal-State relationship.”  She mentioned last year’s Bond v. United States case, where the Court interpreted a federal chemical weapons statute so that it did not reach a purely domestic case of attempted poisoning.  Chief Justice Roberts – who said almost nothing substantive in this week’s argument – declared for the Court that absent a “clear indication that Congress meant to reach purely local crimes,” he would not construe the statute so broadly, despite language that on its face criminalized the use of any “toxic chemical” for nonpeaceful purposes.  Sotomayor was pretty clearly trying to appeal to both Kennedy and Roberts.  She may have succeeded.  Justice Scalia argued that this canon of avoiding constitutional difficulties can’t operate when a provision is absolutely clear.  But the language in Bond was just as clear, and applying it would not have destroyed the operation of the rest of the statute.  Sometimes ambiguity arises from context.  This whole case – which is so silly that it really should not be in the Supreme Court at all - has depended on taking a few words out of context and ignoring the rest of the Affordable Care Act.

The deepest problem with this challenge is that the proposed reading defeats the whole purpose of the statute.  Solicitor General Verrilli observed that it “produces an incoherent statute that doesn’t work,” “precipitates the insurance market death spirals that the statutory findings specifically say the statute was designed to avoid, and of course it revokes the promise of affordable care for millions of Americans.”  A brief by the deans of nineteen schools of public health estimated that, if the challenge succeeds, the damage to the health care system will kill nearly ten thousand people a year.

Those considerations loomed large for Justices Breyer, Ginsburg, Kagan, and Sotomayor.  They even bothered Alito, who said that perhaps states could be given time to adjust before a ruling went into effect, and Scalia, who optimistically predicted that Congress could be counted on to fix the mess.  (Verrilli got a laugh when responded:  “Well, this Congress . . .”)  But none of them were going to cast the deciding vote (although some commentators have gleefully pointed out that Scalia, if he were going to be faithful to his pronouncements on statutory interpretation, should reject the challenge).  It is really up to Kennedy and Roberts.  Roberts gave not a single clue about what he thinks.  Kennedy announced that he was troubled by the intrusion on the states.

The challengers’ strained reading of the statute threatens millions of people with impoverishment, disease, and death.  But Kennedy was more worried about the potential violation of states’ rights.  Often, he seems to care more about states than he does about people:  for instance, he voted in 2000 to strike down the Violence Against Women Act on states’ rights grounds, and last year his vote gutted the Voting Rights Act on the same basis.  It seems likely that the Court will do the right thing.  For the wrong reasons.

Andrew M. Koppelman is John Paul Stevens Professor of Law and Professor of Political Science at Northwestern University. His latest book is The Tough Luck Constitution and the Assault on Health Care Reform.