John Roberts in the hot seat: Now it's his fellow conservative justices playing political games with him

At Monday's King arguments, it was Scalia, Alito and Kennedy's turn to worm their way into the Chief Justice's head 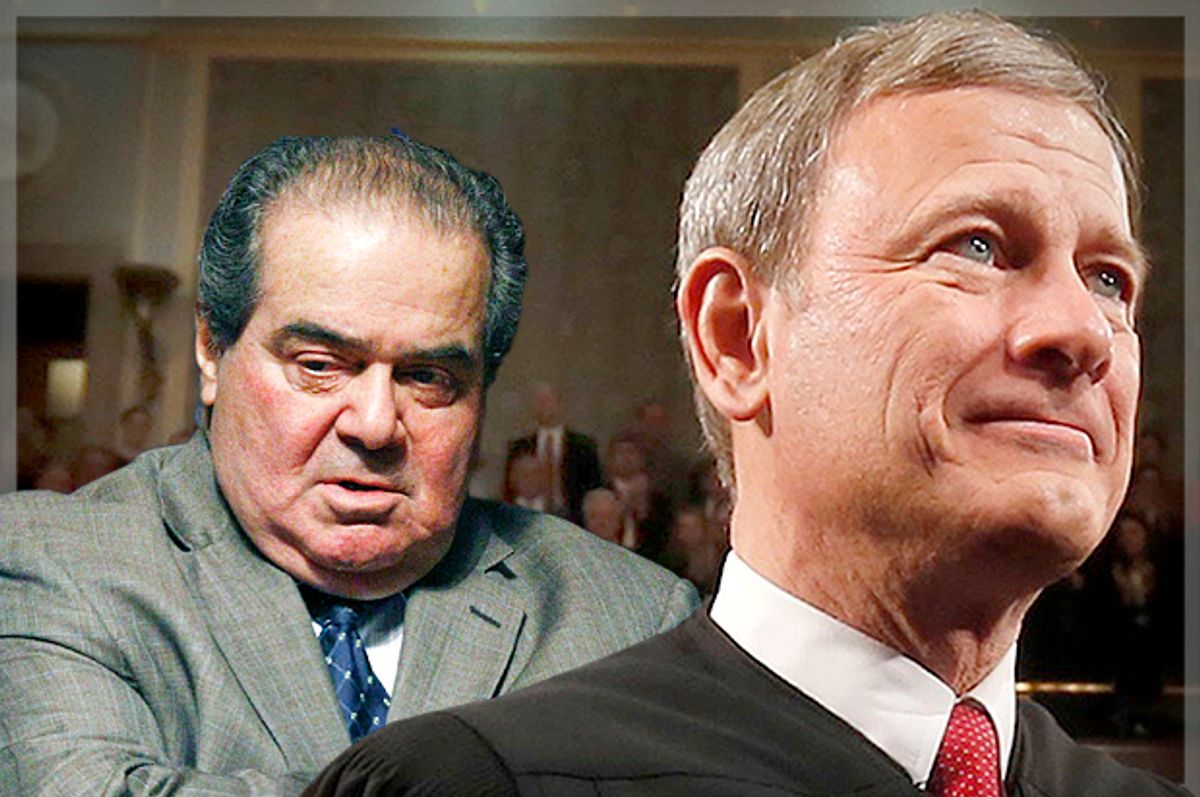 The build-up to yesterday's King v. Burwell oral arguments involved all sorts of political head games from both sides. Though that may have come across as gauche to those stuffy legal scholars consider matters of statutory adjudication to be above politics, it makes sense, since the very fact that a hilarious case like this got as far as the Supreme Court in the first place indicates how politicized the bench has become.

In the weeks leading up to Obamacare's latest SCOTUS adventure, we saw every Republican lawmaker worth his salt introducing a plan, or something plan-ish, to arrest health insurance markets from the chaos that would ensue if the Court ruled in plaintiffs' favor. The only real "fix" to prevent imminent chaos would be a statutory clean-up to maintain the availability of subsidies for those who purchase plans on federally facilitated exchanges. Only one of the GOP plans put forth would extend the availability of such subsidies, and it would only do so for a temporary "transitional" period before [undefined conservative panacea] happens and everything is perfect again. But even this temporary extension is likely a no-go in Republican congressional politics. And the other plans put forth are your typical shareholder-friendly mutterings about how allowing insurers to sell plans across state lines (i.e. a race to the bottom) will solve all of America's health insurance woes.

The White House has been playing politics, too. It's hard to imagine that HHS Secretary Sylvia Mathews Burwell has not once considered a contingency plan in the event of a ruling against the government -- not that there's a whole lot that can be done. But that's certainly the impression she's trying to give off! She, the administration, and congressional Democrats want the justices, specifically Chief Justice John Roberts, to know that a ruling in favor of the plaintiffs, aside from being legally egregious, would introduce a level of chaos to the health insurance system not easily remedied.

What struck me, after reading the transcript of yesterday's arguments, was how the same political dynamic held up within the brief hearing. But instead of conservative legislators trying to reassure Justice Roberts that everything would be fine if he went ahead and struck down the subsidies, it was a couple of his fellow conservative justices doing it.

Justice Samuel Alito, in his questioning of Solicitor General Don Verrilli, floated an appealing option for Roberts that would allow him to rule for the plaintiffs' without having to rely immediately on congressional action to prevent chaos. "Would it not be possible if we were to adopt Petitioners' interpretation of the statute," Alito asked, "to stay the mandate until the end of this tax year as we have done in other cases where we have adopted an interpretation of the constitutional [sic] or a statute that would have very disruptive consequences..."? In other words, we kill off the subsidies, but it wouldn't go into effect until next year.

Verrilli responded, well, sure, you could do that if you want to, but as "a practical matter," it still wouldn't be enough time. If the subsides for federally facilitated exchanges were struck down starting in the next year, and states wanted to set up their own exchanges in response -- hardly something that should be assumed about red states, no matter the pressure they'd face from the newly de-insured -- those states wouldn't have enough time to get things up and running before the next enrollment period.

That's is when Justice Antonin Scalia jumped in to say something comical. Justice Scalia, apparently, has great faith in the 114th Congress to resolve a crisis. He simply can't imagine that this Congress would let our health insurance system spiral into death. Our statesmen can be relied upon to act!

JUSTICE SCALIA: What about -- what about Congress? You really think Congress is just going to sit there while -- while all of these disastrous consequences ensue.

I mean, how often have we come out with a decision such as the -- you know, the bankruptcy court decision? Congress adjusts, enacts a state that -- that takes care of the problem. It happens all the time. Why is that not going to happen here?

GENERAL VERRILLI: Well, this Congress, Your Honor, I -- I --

JUSTICE SCALIA: I -- I don't care what Congress you're talking about. If the consequences are as disastrous as you say, so many million people without -- without insurance and whatnot, yes, I think this Congress would act.

Congratulations, 114th Congress: you now have one person in the country who will at least cynically pretend to have faith in your ability to show a modicum of responsibility in crisis!

It was another conservative justice, though, in Anthony Kennedy, who may have been lobbying Roberts in a much more subtle way -- to save the subsidies. As so many health care reporters have pointed out already, Kennedy surmised that if the statute was interpreted as the plaintiffs see it, it would raise constitutional concerns about the federal government pointing a coercive "gun to the head" of the states -- the same argument that Roberts used (invented?) to make the ACA's Medicaid expansion optional two years ago. And this is a case that, unless Roberts and the conservatives really want to be aggressive, is not intended to answer constitutional questions.

As Noah Feldman argues, Kennedy, who may well realize how stupid this case is but already has enough conservative heresy on his plate since he's about to recognize the right to same-sex marriage, is offering Roberts a way to rule for the government while saving face. Basically he would appeal to states' rights to uphold the subsidies. John Roberts is a big fan of the "I won't embarrass the Court but I will find a way to kick liberals in the teeth for good measure" play. When he upheld the individual mandate in 2012, he got two kicks in: making the Medicaid expansion optional, as well as upholding the mandate only on the grounds that it counted as a tax, not on the Commerce Clause case that the government presented.

This is not the only possible outcome. It could be that the Court rules 6-3, with both Kennedy and Roberts siding with the liberals, in favor of the government. Or it could rule 5-4 against the government, with Roberts and Kennedy putting legacy concerns aside and letting their hair out. We shall see in June! But in no way will this decision be made in a vacuum of politics. Actors from both inside and outside the court have presented these considerations, and they'll be sure to factor into a decision. Otherwise this case would be decided 9-0 in favor of the government, and no one's picking up that bet.