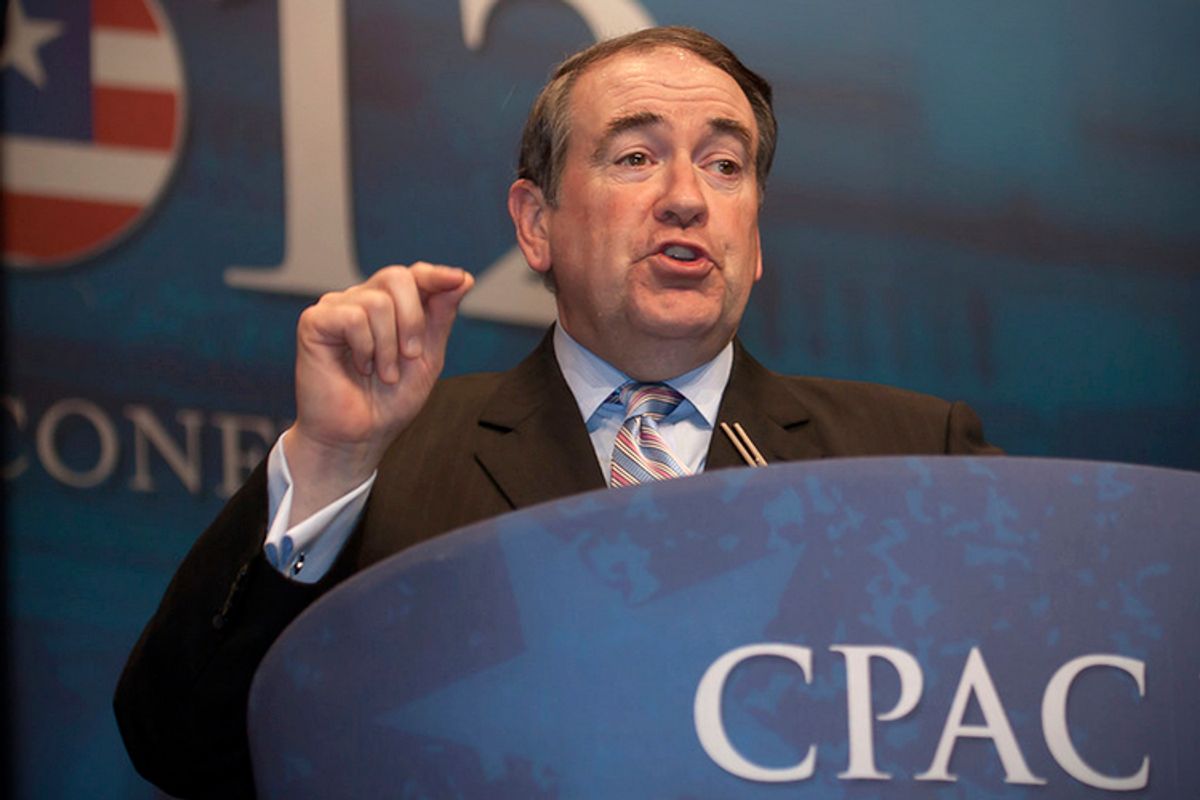 Seven years after coming up short in his first presidential quest, Arkansas Gov. Mike Huckabee appears increasingly likely to mount a second campaign in 2016. If he proceeds with a bid, Huckabee will run, as he did in 2008, as an unabashed social conservative, opposed to abortion and gay rights and in favor of "God, Guns, Grits and Gravy," to borrow the title of his new book. While Huckabee may yet surprise us, he's unlikely to emerge as the GOP nominee, largely because he's a niche candidate known primarily for his social views, not a contender who appeals to a broader spectrum of the party.

That's a problem of Huckabee's own making: He inveighs against "trashy" women who curse at work, denounces Democrats who allegedly think women want "Uncle Sugar" to pay for their birth control, urges states to defy court rulings for marriage equality, and justifies his opposition to same-sex marriage by citing, among other concerns, "the ick factor." Strident social conservatism makes Huckabee Huckabee.

That conservatism is deep-seated, with evidence of his hardline views dating to his days as a young Southern Baptist minister-in-training. While a high school senior and then a student at Ouachita Baptist University in the mid-1970s, Huckabee authored a regular column “RAPture Express” for the Baptist Trumpet, a weekly published by the Baptist Missionary Association of Arkansas. After BuzzFeed reported earlier this year on Huckabee's 1973 columns for the paper, the site's Andrew Kaczynski and Megan Apper got their hands on columns from 1974 and 1975, the highlights of which BuzzFeed published today.

Huckabee's writings evince the fire-and-brimstone brand of conservatism that won him acclaim on Fox News and notoriety among people who generally like such things as gender equality, gay rights, and the 2oth century.

Presaging his slut-shaming of Beyoncé and his aspersions against "trashy" women, Huckabee wrote one column titled "Short Skirts!" in which "some of the newer fashions" favored by women and men (but mostly women), including "very low-cut dresses on girls, extremely tight pants on guys, as well as the halters, bra-less looks on some girls." Writing that God demanded "every Christian's modesty," Huckabee urged readers, "Don't make the temple of God look like some trashy slum-house."

Musing on homosexuality, Huckabee acknowledged that at the time, many people considered it a "disease" or a "psychological problem." But while it "may in fact be both," he continued, "it remains a SIN and needs to be acknowledged before God as such if any lasting cure is to be found."

Huckabee's columns also touch on alcohol (agin' it), guns ("Guns don't kill people -- people kill people."), Watergate (he seemed most offended by the revelation that Richard Nixon cursed a lot), and "The Exorcist" (he wouldn't go, because it included "violence, profanity, and perversion.")

Also evident is the same quasi-theocratic worldview that continues to define Huckabee's politics. He wished in one column for politicians to "apply the principles of Christianity" to their public work, previewing his 2008 endorsement of amending the Constitution to comply with "God's standards."