The more influential Warren gets, the more worried the establishment gets. Here's why they're becoming so unhinged 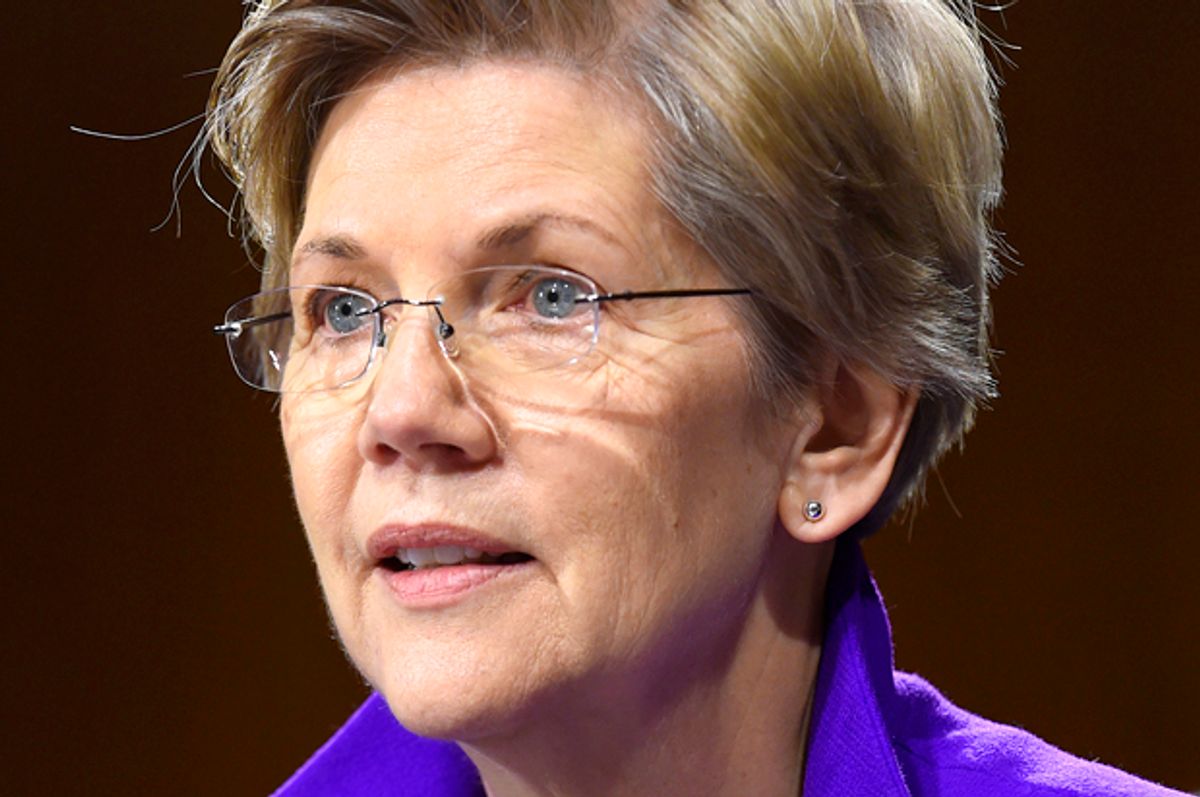 Let’s play a little compare and contrast, shall we? I’m going to share two quotes from two different speakers. Your mission in this game, should you choose to accept it, will be to determine each quote’s original speaker. With all that being said, let’s begin.

[I]n this situation, the first maxim of your policy ought to be to lead the people by reason and the people's enemies by terror. If the spring of popular government in time of peace is virtue, the springs of popular government in revolution are at once virtue and terror: virtue, without which terror is fatal; terror, without which virtue is powerless. Terror is nothing other than justice, prompt, severe, inflexible; it is therefore an emanation of virtue; it is not so much a special principle as it is a consequence of the general principle of democracy applied to our country's most urgent needs.

You built a factory out there? Good for you. But I want to be clear: you moved your goods to market on the roads the rest of us paid for; you hired workers the rest of us paid to educate; you were safe in your factory because of police forces and fire forces that the rest of us paid for. You didn't have to worry that marauding bands would come and seize everything at your factory, and hire someone to protect against this, because of the work the rest of us did. Now look, you built a factory and it turned into something terrific, or a great idea? God bless. Keep a big hunk of it. But part of the underlying social contract is you take a hunk of that and pay forward for the next kid who comes along.

Now that you’ve familiarized yourself with both Q1 and Q2, let’s introduce the two speakers. One is Elizabeth Warren, a Democratic member of the U.S. Senate from the state of Massachusetts and the intellectual founder of the Consumer Financial Protection Bureau. The other is Maximilien Robespierre, the French revolutionary, leading member of the Jacobin Club, and most-famous member of Committee of Public Safety, the small executive body that governed the First French Republic during the Reign of Terror. Can you guess which quote came from which speaker?

Assuming you’re not currently suffering from aphasia, the answer is rather obviously yes — because the two quotes sound nothing alike. And while you’d think this to be self-evident, it is apparently not. Or at least it’s not to Matt Bai, the star pundit-reporter and longtime communicator of whatever the conventional wisdom of the political elite happens to be at any given time. Because in his latest piece for Yahoo!, a rather strained call for Vice President Joe Biden to run for president, Bai refers to Warren as someone “who sounds more like a Jacobin” than a serious candidate for president.

In fairness to Bai, it seems pretty unlikely that his comment was intended to be anything more than a withering quip. Calling Warren a Bolshevik or communist would sound too much like something a Tea Partyer might say; so it’s much less gauche to go with the less-politically-charged “Jacobin” instead. But Bai’s wisecrack is still representative of a bigger phenomenon (and problem) within the Washington mainstream, which still mostly regards Warren with fear and suspicion, and still wonders if she’s “serious” enough to appreciate Larry Summers’ warning that you can’t be influential in D.C. if you’re known for rocking the boat.

As the Democratic caucuses in Congress have shrunk, and as Warren’s influence has grown, the elite’s anxiety over her rise has become almost palpable. I’ve lost track of the number of times one centrist pundit or another has called her the Ted Cruz of the left (which is never intended as a compliment). It was just this week, in fact, that a new group of “centrist” Democrats, “The New Democrat Coalition,” announced its plans to keep control of the party out of Warren’s hands. It’s all very predictable; but if you’re familiar with Warren’s views and her record, it simply doesn’t make sense.

By way of illustration, take a look at the new profile of Warren published this week in Politico Magazine, which is hardly a hotbed of doctrinaire liberalism. Written by Glenn Thrush and Manu Raju, the piece bears most of the hallmarks of the Politico style, for better and worse. At no point during its thousands of words do Warren’s policy views get any more than the most cursory attention, and the only new information it provides is essentially gossip. (Former President Bill Clinton refused to campaign for Warren during her 2012 Senate bid because she has been mean to his banker buddies, for example.) But what’s most interesting about the piece is that even here, in the unofficial flagship magazine of elite Washington, the fundamentally non-radical approach Warren takes to politics is crystal clear.

Indeed, what we see Warren doing in the piece more than anything else is playing politics by the traditional means. Before her star-making performance as an overseer of the Wall Street bailouts, she spends years quietly but consistently building contacts in Washington and making powerful friends. When the White House decides it won’t go to bat for her to head the Consumer Financial Protection Bureau she largely created, she doesn’t rail against them in the press or demand it appoint a radical in her stead. When Senate Minority Leader Harry Reid offers her a spot on the leadership team, she happily takes it, hoping to prove to anybody watching that she’s a “team player.” Hell, according to Politico, she’s even trying to find ways to compromise with Republicans in the Senate!

Given all of the above, a reasonable person might ask why Matt Bai’s Washington finds Warren so threatening nevertheless. I’m not a mind-reader, of course, but I can offer two theories. The first and most obvious reason is that Washington is, to put it gently, a swamp of corruption where many influential people live comfortably — thanks to Wall Street. Maybe they’re lobbyists; maybe they work in free-market think tanks; maybe they’re employed by the defense industry, which benefits greatly from Wall Street’s largesse. Or maybe they’re government bureaucrats who find Warren’s opposition to the "revolving door" to be in profound conflict with their future plans.

My second theory is less political and more prosaic. Another reason Bai and his ilk find Warren discomfiting may be her glaring lack of false modesty and her disinterest in keeping her head down and paying her dues. Because despite being the capital of what is nominally the greatest liberal democracy on Earth, Washington is in truth a deeply conformist and hierarchical milieu, one where new arrivals are expected to be neither seen nor heard until they’ve been deemed to have earned their place. And while Warren may want to be seen as a team player, what she cares most about is reining in Wall Street. If she deems it necessary to accomplish her primary goal, she’s willing to step on some toes and lose a few fair-weather friends.

To my eyes, this still leaves an expansive distance between Warren and the 18th century Frenchmen who so vigorously wielded the “National Razor.” But I can’t entirely blame Bai and company for worrying that the ascension of this law professor from Oklahoma portends an October Revolution yet to come. As defenders of the Ancien Régime once warned King Louis XVI, the moment when you have the most to lose is exactly when you must tighten your grip.