"Unbreakable Kimmy Schmidt" is still rough around the edges 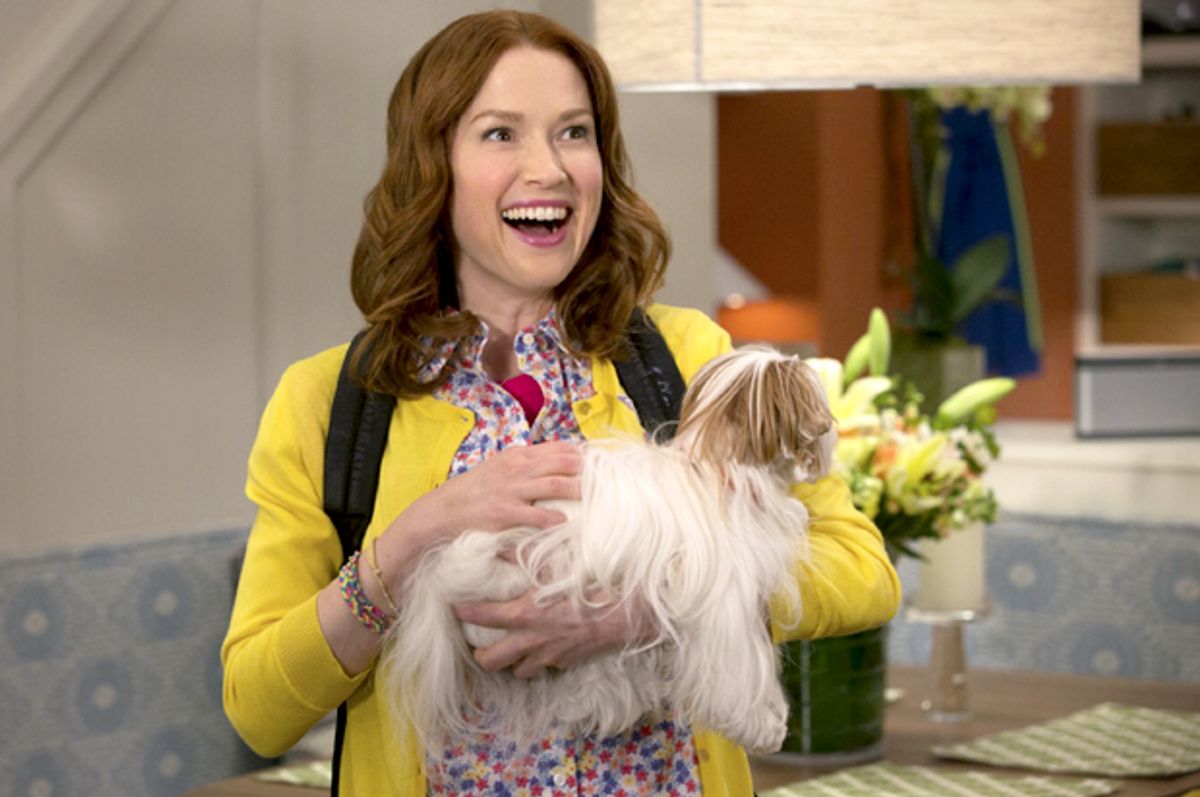 Kimmy Schmidt is an upbeat person in a dark world. She’s not always happy, in a grating, Pollyanna-ish kind of way, but when a cloud does blot her sunshine, it takes just a few minutes—never more than 22, because this is a sitcom—for her to beam again. That might be, in part, because she spent 15 years underground. When you haven’t seen daylight for 15 years, everything looks like the sunny side of life.

Kimmy spent 15 years underground because she was recruited—forcibly recruited, i.e., kidnapped—into an apocalyptic cult with four other members. Three, like her, were young women (though none as young as her; she was just 14 when she was snatched); the fourth is the Reverend Richard Wayne Gary Wayne, senior prophet and CFO of Savior Rick’s Spooky Church of the Scary-Pocalypse. The first scene of the original Netflix series is their release, but throughout the series, “Unbreakable Kimmy Schmidt” offers flashbacks to life in the bunker, and girl, it’s bleak. The four women are dressed like pioneer missionaries—long, shapeless gowns and severe French braids—and while away what they believe to be the post-apocalypse by rereading the same Babysitter’s Club book hundreds of times and re-enacting scenes from their past (Cyndee’s first date is a big one). There’s a crank plugged into the wall that they know does nothing, but they sometimes slave away at just to pass the time. Their unending boredom is occasionally interrupted by sermons from the good reverend, who tells them they’re “garbage,” “dumb-dumbs,” and other mild but grating put-downs.

Which is to say, “Unbreakable Kimmy Schmidt” is a dark, dark comedy. Kimmy herself—played extremely well by Ellie Kemper—is a bundle of sunshine and rainbows. But the show itself dances in the space between tragedy, comedy, and self-help book—meaning that it’s no surprise that at times it misses a step. Tonally, the comedy is all over the place. It’s a jerky ride—but a fun one, too. It’s continually engaging, how the sitcom engages with what is, on face, a horrific origin story—and consistently delightful how Kimmy makes lemonade out of her particular lemons. She has an unquenchable joie de vivre that the show uses for comedic effect—whether that’s buying light-up sneakers as her first act out of the bunker, or eagerly kissing any guy who demonstrates interest. And most importantly, Kimmy isn’t clueless, or dumb, or naïve. She’s out of the loop, but she’s not a victim. The show avoids too much hackneyed “Blast From The Past” humor by placing Kimmy’s last reference point in 2000—a while ago, but not ancient history. In a show that’s making comedy out of a nightmare, that’s a key element.

For a New Yorker who has made numerous shows based in the city, Fey is fascinatingly critical of the Big Apple: “30 Rock,” for example, depicts the world outside of Rockefeller Center as a terrifying hellscape of off-brand Cheetos and angry bodega cashiers. With “Unbreakable Kimmy Schmidt,” Fey and co-creator Robert Carlock (who also produced “30 Rock”) have a lot more of the city to comment on. A lot of shows are set in New York City just because it’s cheap for the studio and looks cool on TV; this show is set in New York because Kimmy is the antithesis of New York. She’s been reared in near-isolation and forced intimacy; the city is loneliness in the middle of a crowd. Money was meaningless in her post-apocalyptic bunker; money is all that matters in 2015 in the city.

In other, less interesting ways, “The Unbreakable Kimmy Schmidt” has some of the hallmarks of off-episodes of “30 Rock”—a cutesier, more childish type of comedy than what you might find on another Netflix original, “Bojack Horseman,” or a snarkier comedy like “The Office.” “Unbreakable Kimmy Schmidt”’s darkness is mostly there for the viewer to untangle on their own; the foreground is all capers and stunts.

And no one could characterize that better than Fey alum Jane Krakowski, who is both effortlessly hilarious and perplexingly inauthentic. She’s not playing a character that is distinctly dissimilar from Jenna Maroney; she’s not playing a character that engages with the tragicomedy of “Unbreakable Kimmy Schmidt” in a meaningful way, either. The third episode introduces us to her character’s backstory—and it’s a bizarre Native American subplot that is either supposed to be funny or sad but winds up being just perplexing. Carol Kane’s casting as Kimmy’s landlord Lillian is similarly confusing—it’s not always obvious if she’s supposed to be funny, though she fully and convincingly inhabits the role of strung-out, scrabbling landlady. (Tituss Burgess, who plays Kimmy’s roommate Titus, is a much more satisfying cast member.)

But: If the premise of “Unbreakable Kimmy Schmidt” is both its strongest and weakest quality—in that it sets up a fantastic, loopy story but can’t quite explain some lingering real-world concerns—Kemper is its foundational cornerstone. The rest of the show is built around her, and it’s her performance that is able to make the show’s softer parts work, even as the show’s best moments showcase her skills. Kimmy believably trips, stumbles, and occasionally glides through her second lease on life, wielding her gumption, her dazzling grin, and her light-up kicks. She is believably unbreakable, both underground and in the big city.