If you're not watching "Togetherness," you're missing some of the best TV of the year

Tonight's season finale is gorgeous, self-aware and as gut-wrenching as the infamous Wilhelm Scream 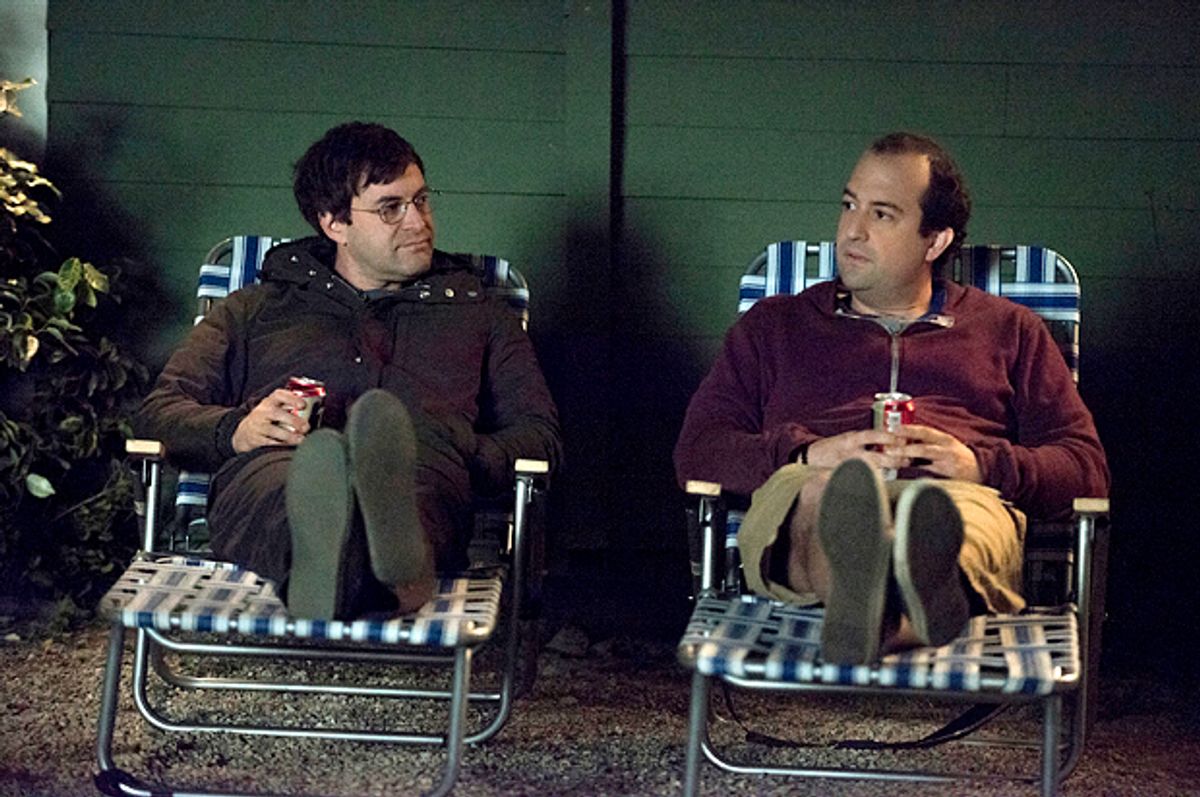 As I wrote when the show first premiered, one of the hardest things to explain about “Togetherness” is that it looks generic, but isn’t. To some observers, it is generic — Heather Havrilesky at BuzzFeed wrote a scathing diatribe against the show for embodying “the apotheosis of hipster family awfulness.” As someone who typically is the first to complain about self-absorbed, affluent white-people stories taking center stage, it’s amazing how little I agreed with her point of view. Aside from the obvious part — which is that she didn’t like the show — Havrilesky’s specific complaint is that the characters of “Togetherness” aren’t “regular people” — they are instead “miserable, spoiled jerks” who aren’t self-aware enough to know that they’re the aforementioned miserable, spoiled jerks.

That stayed with me when I re-watched the excellent season finale of “Togetherness,” which airs Sunday night. It’s a gorgeous, heartbreaking episode of television, one that is immediately in contention for one of the best episodes of the year. It chronicles the rupture of what the characters throughout the first season have been fiercely clinging to — the Pierson marriage, Alex and Tina’s undeniable chemistry, and these four people’s lives together in Los Angeles.

The finale starts with Brett (Mark Duplass), Michelle (Melanie Lynskey), Alex (Steve Zissis), Tina (Amanda Peet) and even the kids Sophie and Frankie in a convivial mood at the dinner table. It ends with each of them in a separate, enclosed space — not just apart, but slowly moving farther away from each other, like our own red-shift universe. The exact hows and whys of their dissolution has been the work of the whole season — Michelle’s growing interest in the charter school as a way to find her voice and connect to her community after taking several years off from the working world; Tina’s fear of really risking her heart in a relationship; Alex’s apathetic approach to his acting career. But by the last minutes of Sunday’s episode, the damage has been done, and no more words are necessary. Instead “Togetherness” resorts to a montage, set to James Blake’s “The Wilhelm Scream.” It is stunning — haunting, and beautiful, and tragic, and just so, so well-executed.

James Blake is a 26-year-old British musician whose style is notoriously difficult to define, even for Blake himself. It’s technically dubstep, and technically electronica, but doesn’t really sound like either; a more mainstream analogue might be Beck, who, like Blake, uses hip-hop beats and electronic modes of production, like sampling, to create a distinctive sound. The first beats of “The Wilhelm Scream” are staccato and muted — so by the time the viewer realizes it’s a song in the background, and not just a variation on the “Togetherness”’ score, you’re already in.

“The Wilhelm Scream” starts playing when Brett, realizing his marriage is on the edge of a knife, packs the kids off with a babysitter and starts driving north to Sacramento. But the moment you realize it’s a song is when Zissis’ character Alex stares slightly off-frame, sitting in his airline seat. “Togetherness” has been a revelation both for Alex, the character, and Zissis, the actor — a breakout moment for Alex in this season of the show corresponds with Zissis’ rising profile, as many viewers are getting to know him for the first time (including myself). It makes his moment of silence here more poignant than most, as this character, and this actor, and we, the audience, recognize that there is power and talent present. For a brief moment, it seems like Alex can hear the music, can see it’s too late, can feel the tragedy unfolding. It’s an elegant bit of foreshadowing.

Even as Brett drives, we see that he is too late — Michelle is at the same time finally admitting her attraction to her fellow charter-school advocate, David (John Ortiz). The song’s breakdown corresponds with the sudden rush of passion Michelle and David share; the viewer is stuck between feeling for Michelle, feeling for Brett and feeling for David, too, who is nothing but encouraging and supportive. It is a moment that strands the viewer into feeling little but empathy, even for these people who can’t quite see what’s right in front of their faces.

Excellent direction, acting and pacing aside, this is a moment of triumph for music supervisors Manish Raval and Tom Wolfe, who are behind the musical choices for some of the most heart-rending and apt cues in film and television — “Girls,” “Donnie Darko,” “The Big Lebowski,” and even “Fresh Off the Boat,” where hip-hop plays a major role in the storytelling. Raval and Wolfe’s work in “Togetherness” is no exception. “The Wilhelm Scream” is named after an iconic audio sample of a man screaming that has been used, usually for characters falling from a great height, since 1951. Sound and cinema geeks know to listen for it in blockbusters and indie films alike (and in “Togetherness,” Duplass’ character Brett is a sound guy for films). James Blake took the notoriety of the scream and, in his song, made a story for the screamer: “I don’t know about my dreams / I don’t know about my dreaming anymore / all that I know is I’m falling / falling / falling / falling / might as well fall in.” It’s painfully appropriate, both for the famous Wilhelm scream and for the characters of “Togetherness,” who are screwing up their lives in slow-motion, and worst of all, know that it’s happening. You can see, on their faces, in the last minutes of the finale, the frozen terror of knowing that they are about to hit the ground.

When I think about what makes “Togetherness” so powerful, it’s that this time of slow-motion failure is the most normal, run-of-the-mill situation imaginable. It’s true that most people do not get the opportunity to score free tickets into a blockbuster film premiere; as Havrilesky points out, that’s privilege, even if Alex and Tina have just one ticket between them. But there is nothing more “regular” than being an un-self-aware jerk; there is nothing more normal than being just this side of miserable. There is nothing First-World about finding yourself in a bad marriage, or giving up on a dream to settle for the safer option — and indeed, to imply that they’re not is its own form of privilege. As Teju Cole wrote on the subject:

"Yes, Nigerians struggle with floods or infant mortality. But these same Nigerians also deal with mundane and seemingly luxurious hassles.… All the silly stuff of life doesn't disappear just because you're black and live in a poorer country.… Here's a First World problem: the inability to see that others are as fully complex and as keen on technology and pleasure as you are.”

“Togetherness” is, in all honestly, as regular as regular can be — a story of aging, and coming to terms with hard truths, and sucking at things, and watching yourself fail at the things you said you’d be good at. That’s everyone; that’s life. And in this incarnation, it makes for sublime television.