Jeff Bezos relies on lowly grunts like me: Life as a cog in the Amazon machine

I keep hoping for an uprising among my fellow contract workers. In the meantime, let's ship some Skechers to Kansas 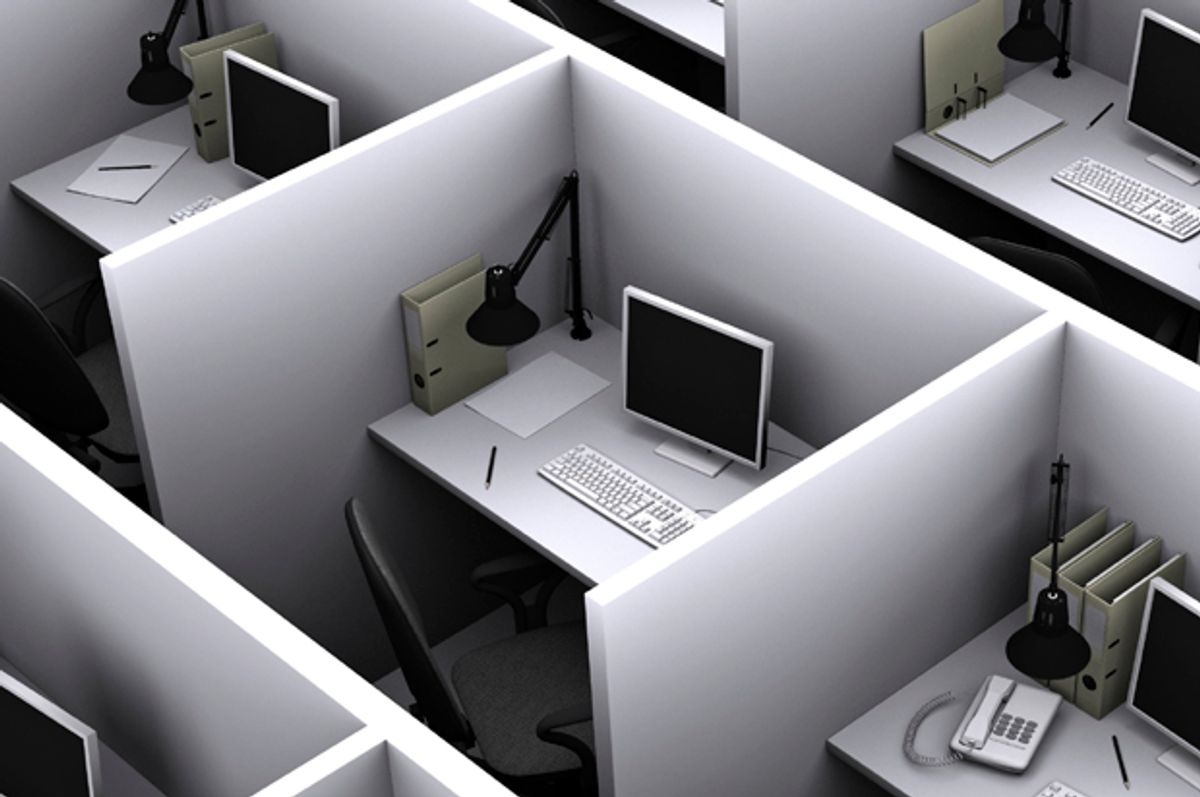 In my father’s capitalism, employees were nurtured by their company and encouraged to learn new skills. Today’s major corporations hire disposable temp workers to do the work of a full-time employee, without the obligation of providing benefits. Temp workers are familiar with dead ends: They are hired with a predetermined exit date. The moment they feel comfortable in a role, the contract expires and it’s on to the next job.

After eight years of this, I badly wanted a change. I tried my hand at freelance writing, but after six months and only $950, I got a call from a job recruiter who told me I’d be “perfect for” a job at Amazon. She’d found my LinkedIn profile and because of my past experience, temping twice at Amazon and twice at Expedia, thought I would be an excellent candidate for a job assisting Amazon Fulfillment Centers with mis-ships and lost inventory.

I don’t know how I feel about being “perfect” for the job of handling a customer return on a pair of pink Skechers. There was a one-in-a-million chance that my parents would meet and produce me. My time on Earth is precious. Making sure a woman in Topeka, Kansas, has the right pair of sneakers to wear to Zumba class doesn’t feel like the zenith of my time here on the planet. If I’m hit by a bus tomorrow I doubt I will find any comfort knowing I spent valuable time helping people get the right exercise attire delivered to their front door in a timely and inexpensive manner. That said, I was desperate for the money. I accepted the position.

On Monday morning, I rode the elevator up nine stories, fantasizing about a Marxist uprising where temps took control of the means of production and held Jeff Bezos hostage until he conformed to a socialist belief system where temp workers are valued as more than just cogs in his world-dominating machine. When the doors opened I followed a train of temps — dropping our sandwiches in the fridge, filling our mugs with coffee, then scattering to our desks to hunker down for the next eight hours.

I’m an adequate temp. I work hard enough that the higher-ups leave me alone, but not so hard that I can’t find 20 minutes a day to tinker with my fantasy football team. Knowing the job has no future makes it difficult for me to find the motivation to put on my best performance. And yet somehow, Amazon keeps hiring me.

Amazon temps are brought on for a trial basis that lasts a maximum of 11 months. The temp must sink or swim. Those who tread water have their contract renewed, while those who can’t perform are left to drown. When I see a new hire looking lost and confused, I sympathize. The first week of a new contract consists of a brief introduction and a link to outdated SOPs and Wikis, leaving the new employee to ask the people around him how to do his job. Once a new employee feels a slight bit of comfort, management will send an instant message with a list of common mistakes.

Some temps love it when the new hire needs to be trained. They assume the role of lead temp, because they relish the feeling of importance that comes with pointing out someone else’s errors. I swear I can see a suppressed grin when a senior temp gets to say, “Steven, I need to speak with you.”

One guy, who was enjoying his senior status a little too much, used the phrase, “I need to see you in my office,” which was really his desk littered with half-empty bottles of peach ice tea crammed into the corner of a room housing 10 other temps. “Do you understand this?” he asked me. “I don’t want to see you make this mistake again.”

I was aware of the mistake but hadn’t cared enough to correct it. I had hoped no one would notice, or at least by the time someone noticed, my contract would have expired and I’d be working my next temporary job.

“I’m going to have to pay more attention to your work,” he continued.

I felt sad for him that he cared so much. It was his first contract out of college, and there was hope in his eye. I wanted to grab him by the shoulders and shout, “Don’t you realize none of this matters? What do you think we’ve got left, 30-40 years? Have you ever had a Washington peach? The season just started! They’re so juicy. Way better than that artificial stuff you drink. Let’s hitchhike to the country. We can pull peaches right off the branch and eat them watching the sunset. Let’s remind ourselves what is real.”

Instead I just said, “Sure thing, guy.”

Some temps bought into his act and behaved as if he was their boss. It created a hierarchy like high school. The most senior temps were in charge and took ownership of the comfortable couch in the casual conference room during meetings. They stopped timing their lunch breaks and dipped out 15 minutes early whenever management was too occupied crunching the numbers to notice. The temps who’d done six months were the juniors. They were still full of confidence that they’d be that rare person who managed to transform his or her contract into a full-time job. They tried to buddy up with management, finding out what video games they played or TV shows they watched, and showed phony enthusiasm on those rare occasions management and temps paths crossed at the urinal or coffee machine. The sophomores had been on contract for two months and were starting to feel comfortable. A few fell into a routine and knew where to get coffee and what day of the week the grilled cheese food truck showed up. They were still considered newbs by everyone else except the temps who’d just started.

I never bought into these roles. The hierarchy was meaningless. I just wanted to do my time and get out with as few beatings as possible. From the time I sat down at my desk until the time I left for the day, I wore my headphones. Even if nothing was playing, I kept them on just so no one would bother me. The unfortunate thing that happened was I spent all my time working. I was resolving more cases than was expected of such a new employee. I didn’t even take my government-mandated 15-minute breaks -- not because I was trying to impress, but because I feared that any time I sat up from my chair I was opening myself up to conversation. I would be happy to make small talk about a recent ballgame, but all they ever wanted to talk about was work.

“Can you believe Apple has stopped calling the black iPod ‘black’ and replaced it with ‘space gray’? We’re going to have to make so many changes. You thinking about working this weekend?” My mind would wander whenever I found myself in one of these pointless conversations. I imagined climbing on the top of my desk, breaking my laptop over my knee, throwing the pieces in the air, and then yelling, “Life is more than a paycheck,” but I instead smiled and nodded, waiting for the appropriate moment to put my headphones back on.

Unbeknownst to me, my antisocial work method was noticed. I went from freshman to sophomore in two weeks. I was told that I would be shadowed by a new employee. After two weeks of successfully speaking less than 50 words a day, I would have someone next to me for eight hours straight. It was my job to explain each step I took to resolve a case. I liked to jokingly refer to Bezos as the Serpent King, but the fact that I would spend two days in my own personal hell made me consider he might actually have a forked tongue behind his sinister smirk.

I had openly criticized him before. After completing my previous Amazon contract, I published an “Open Letter to Jeff Bezos,” telling him how productivity was stifled by the practice of rotating temps in and out to save money. My letter gained so much attention that Amazon had to release an official response. That response was “no comment.” I figured that riff had destroyed any chance of being rehired, but the background check they performed on me must not have included a Google search, at least not one that went past the fifth page (the first five pages are dominated by Steven Barker the child murder). It’s not until page six that you get to Steven Barker the disgruntled Amazon employee. For a brief moment I did consider maybe this had been part of Bezos’ plan to get even with me. Bezos, Beelzebub, they’re not far off.

The newb turned out to be a decent guy, apart from a mild case of halitosis, and even though I was uncomfortable with the situation, I explained to him what I was doing as he looked on and took notes. Occasionally he stopped me and asked, “Why did you do that?”

My most common response was, “Because that’s what they told me to do.” I think one of the reasons I have succeeded in the temp world, if there is such a thing as “success” in the temp world, is because I never look for logic. I simply do what is asked of me. I play the part of the tool they want me to be and let them use me up until it’s time to put me back in the drawer.

There were times when I knew I wasn’t following correct procedure. I’d forgotten the correct way, but I had discovered a way to solve the issue on my own that didn’t result in a lecture from management, and as far as I was concerned that was just as good. I knew it was wrong, but simply didn’t care.

When training was complete, the newb was sent out on his own. I helped him out as best as I could and watched him get better and it wasn’t long before we were on the same playing field. One day he would be training someone the incorrect procedures I taught him and maybe add a few incorrect procedures of his own. Meanwhile, Amazon will continue to gain more control over every aspect of the consumer’s life while rotating in new temps every 11 months. Whether Amazon chooses to invest in its employees or not, it won’t be long before Amazon has a hand in every purchase made on Earth, but it will still seem meaningless to me knowing that I live on a giant rock that can sprout trees that produce delicious peaches and any day I could be hit by a bus.

If I had to place myself in the temp hierarchy, I’m that guy who’s too old to be hanging out at high school, but has nothing better going on. I want to leave the windowless rooms and strive for greatness, but I’m complacent. I’m not much different than the drones Bezos plans to use to deliver Skechers to Topeka, Kansas.

Steven Barker is a 2014-2015 Made at Hugo House fellow and is working on a collection of essays that detail the wide range of short-term jobs he's held over the past ten years. When he's not working or writing he hosts the arts and entertainment podcast “Ordinary Madness,” and he is the co-founder of “Cheap Wine & Poetry” and “Cheap Beer & Prose.”