Malaysia Airlines Flight 370, one year later: "Nothing is certain, as everything is possible"

We're stuck inside a real-life ghost story, in which details are ephemeral and an ending stubbornly elusive 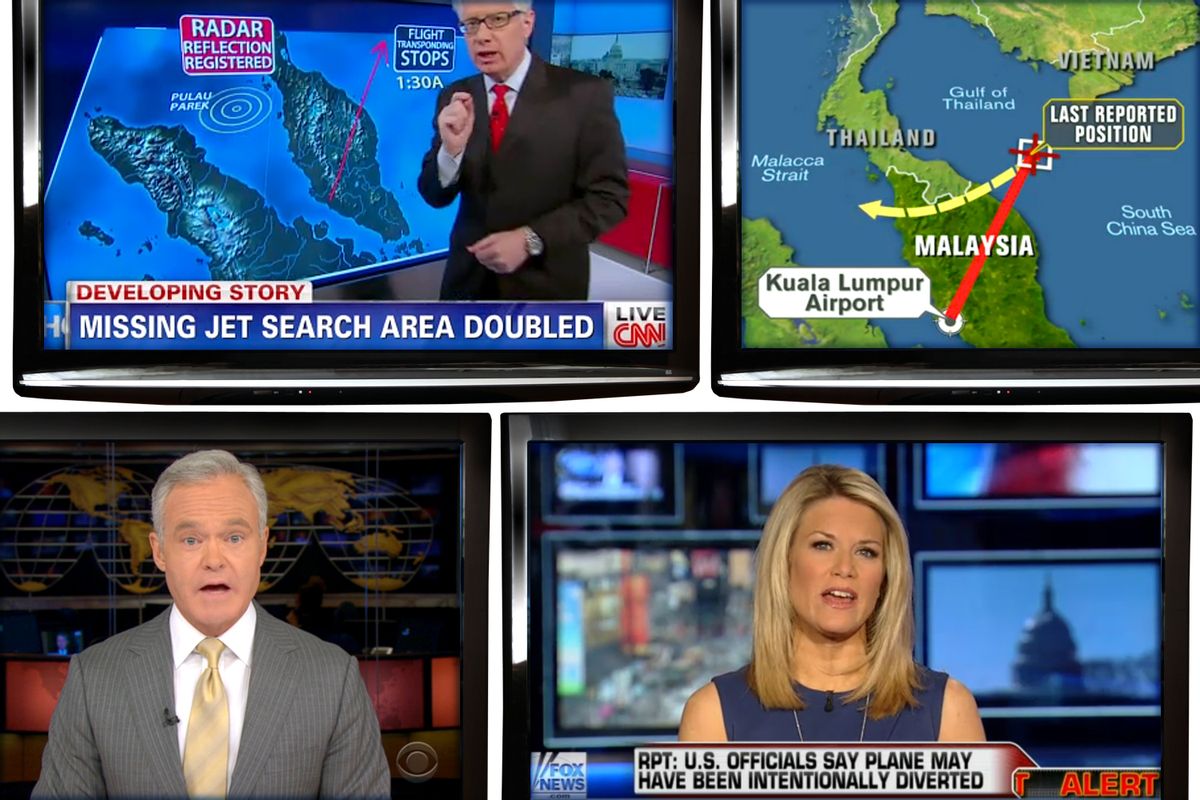 On the one-year anniversary of the disappearance of Malaysia Air Flight 370, we seem stuck inside of a real-life ghost story, one in which exact details remain ephemeral and an ending, stubbornly elusive. In contrast to the majority of commercial plane crashes each year—2014 being one of the safest years on record with only 12 total, or less than one accident per every 1 million flights, according to the Aviation Safety Network—the initial mysteries of Flight 370 haven’t faded with a recovered black box or ragged tail wing, with scorched panels or found bodies. In our heavily surveilled times, it seems almost impossible that there is still no sign, or trace, of Flight 370, but so it is—and that evidentiary absence, that suspension in mid-story, defies our human craving for both certainty and closure.

What we do know is this: On March 8, 2014, a Boeing 777 with its 12 crew members and 227 passengers from 15 countries, took off from Runway 32R at Kuala Lumpur International Airport at just after midnight on a red-eye flight to Beijing. The pilot had 30 years' experience; the craft was one of the safest in the world. On board were a famous calligrapher, foreign employees of an American high-tech firm, and a number of small children, including two American nationals. We know the plane proceeded northeast over penisular Malaysia to the South China Sea for nearly an hour and a half, showing no signs of distress, after which air traffic control lost its signal. The plane was never heard from again, though was tracked by the Malaysian military after having veered from its flight path, taking an abrupt left-hand turn and flying erratically west over the Straits of Malacca toward Penang Island in the Andaman Sea, until ostensibly it ran out of fuel and simply dropped from the sky into the southern Indian Ocean.

Did it happen like this? Was the craft compromised by mechanical malfunction, or the work of extremists, or a suicidal pilot? What exactly went wrong, and how is it that a year later, we’re asking the same questions as Day One?

To be sure, the fate of Flight 370 is its own unique tale, replete with bureaucratic bungling and cultural misunderstandings, unfollowed protocol and uncomfortable stonewalling. Blame has been cast far and wide, while uncertainty has given rise to any number of theories, many of the conspiracy ilk: The plane was taken to Kazakhstan, Christmas Island, Afghanistan, downed by Mossad or the CIA, or plainly shot out of the sky by the Thai military. Some have focused on the four tons of mangosteens, a tangy Asian fruit, in the cargo hold, questioning whether they were mangosteens at all or rather some secret cargo worth destroying, or perhaps capable of destroying a plane. At one point, Courtney Love claimed to know the location of Flight 370 based on a satellite photo. Even now, one French journalist continues to investigate a theory that the plane landed safely in the Maldives.

Of course, in the most cosmic picture, it doesn’t matter what happened.  What matters is that there were 239 passenger and crew on the vanished flight—in aviation parlance, 239 “souls”—and now not even their recovered bodies can tell the story, or put an end to it. Those left behind, the next of kin—the families, friends and relatives of the disappeared—have spent a year fearing the worst but also, without proof to the contrary, holding out hope for some one-in-a-million, Gilligan’s Island-type scenario that might bring their loved ones back alive. Pauline Boss, a professor emeritus at the University of Minnesota, has termed the phrase “ambiguous loss” as a way to describe this aftermath for those who live in the wake of a loved one’s vanishing. Her studies started with MIAs from the Vietnam War, but include the wife/husband/daughter/son who leaves through the front door one morning never to be seen again. The left-behind can’t mourn, for mourning is a violation of the possibility that their loved one may still be living. And they can’t feel joy because the presumption is one of death.

This sort of limbo is hard to fathom, for we are creatures who live by concrete stories with their beginning, middles and ends in order to convince ourselves that there must be grander design to the universe. We depend on these stories to better understand our world in its brightness and brutality, and are tormented if left floating, or cut off, if unable to package and compress our experience into some simulacrum of reality. How many times have we heard our children reflexively blurt, “And then what happened?” when we find ourselves distracted in midstream of some family yarn. The need to know is inborn, while neuroscience tells us that listening to such stories triggers the release of cortisol, which focuses us and causes distress, and oxytocin, which evokes our care, connection and sympathy, making us more empathic. This chemical event, the fireworks of the mind in the presence of a story moving deftly over a narrative arc, is something we know so little about, but may, too, lead in the end to this tentative idea of closure.

Some years ago, while reporting on the Swiss Air Flight 111 crash off of Peggy’s Cove, Nova Scotia—one in which the McDonnell Douglas MD-11 smashed into the ocean at 400 miles per hour, killing all 229 aboard—I spoke to a pathologist, Dr. John C. Butt, who was in charge of identifying the remains. It had been a violent end, the remains collected in 15,000 pieces from the debris field. He knew that for the next of kin there would be no intact bodies to gaze upon, no consolation of open caskets, for those who crave such consolation. When he went to address the families, he remembered saying the first and most humane thing he could think to say. “Not only are they dead, but you will never see your loved ones again.”

As he remembered it, there was an audible gasp in the room, but there was also this hard fact, the first foothold of a new reality. An ending—and a beginning. While it took more than a year to identify all of the remains in that case, investigators also collected, identified and stored pieces of the plane in a warehouse—1 million fragments of seatback and fusillade—where they endeavored to puzzle Flight 111 back into being. In this case, the next of kin were invited in—as they were also taken to the spot in the Atlantic Ocean where the plane went down—all in order to provide some essential imagery for what had taken place, however horrible. Meanwhile, the media ran its familiar disaster refrain: reporting on the initial shock and grief, the recovery operation, the forensic evidence, the funerals and memorials, and the supposed “healing,” creating an arc, finally fitting the whole thing into a somewhat neat, if imperfect box, to be buried with history.

In the case of Malaysia Air 370, of course, none of this has come to pass. Nothing is certain, as everything is possible. Some of the next of kin have undertaken their own investigation, using source funding to pay for a private investigator. Some have become lost in the haunting, and even as Australian rescue ships motor to the South Indian Ocean to renew the investigation (which is scheduled to conclude in May), they grow more and more despondent with each passing day. Others try to find “some measure of meaning in the meaninglessness of ambiguous loss,” as Boss has it. Deprived of the rituals of aftermath, some even hold out irrational hope that their loved ones may reappear, lost and found on that desert island somewhere. As Sarah Bajc—the partner of American Philip Wood, who died in the crash—recently told GQ magazine writer Sean Flynn, while everything suggests foul play and coverup to her, she still clings to the chance Wood is alive out there. She has to, she says. Which makes her fight harder for the truth, and this story’s end. Perhaps at some point, we’ll know that truth definitively, and Bajc and others will begin along a narrative arc toward what the mind craves, something resembling certainty and closure. Until, then, however, there’s a vast, blank sea, a desert island, and 239 souls, still out there somewhere.

Michael Paterniti is the author of the just-released collection of essays, "Love and Other Ways of Dying."