"Girls" comes out, and maybe moves on: Why her dad's revelation might finally make Hannah grow the hell up

Accepting your parents as human beings in their own right is a classic step toward adulthood, but is Hannah ready? 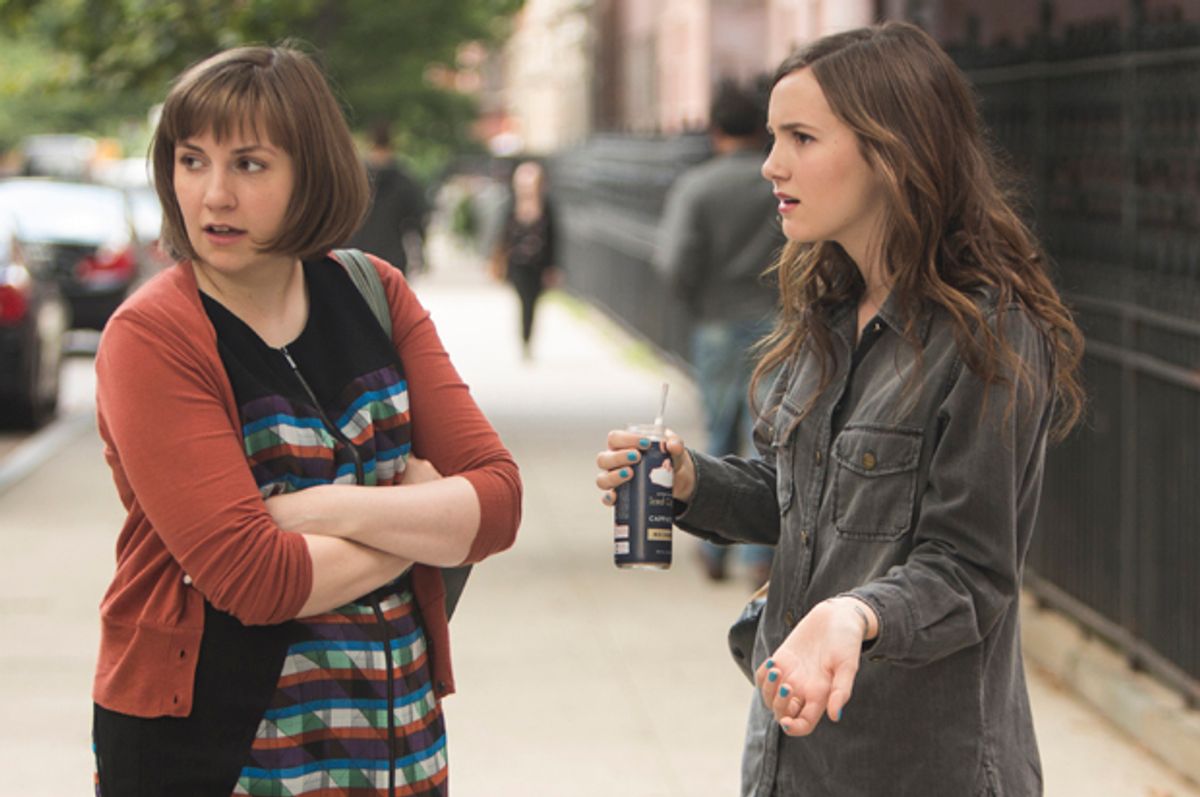 If you watch "Girls" or have read much online entertainment news this morning, then you already know about the big twist that dominated last night's episode (spoilers ahead, obviously): Hannah's dad, Tad, is gay. Tad (played by Peter Scolari) comes out to his wife, Loreen (Becky Ann Baker), within the first moments of the episode, immediately after a visit to their therapist and in an exchange that feels distinctly like something from a one-act play. Their back-and-forth captures something about the revelation that isn't just true for the characters, but for the audience as well: It's sort of out of nowhere, but also not entirely unexpected.

As several reviewers have already pointed out, "Girls" alluded to the possibility that Tad might be gay as early as the first season, when Hannah's ex-boyfriend Elijah leaves a testy reunion drink with, "Nice to see you, your dad is gay." That feeling of sort-of-knowingness carries over to Tad's phrasing when he actually comes out to Loreen, which manages to be both ambivalent and crystal clear: he begins by telling his wife, who's just received tenure and starts the conversation in good spirits, that he's "been thinking lately" he might be gay, only to clarify later, "I don't think -- I am."

I always find myself a little taken aback at the brevity of "Girls" episodes at the end of each one, and that was especially true after this week's bombshell. The episode ends with Loreen blurting out to Hannah on the phone that her father is gay, and we see Lena Dunham's character reach no conclusions about the news while she lets out a lengthy "ummm" and the screen fades to black. Tad's confession is and will clearly continue to be a major moving part in the show's constellation of 20-something self-absorption, angst and halfhearted efforts to grow the hell up, and it was handled with shocking deftness despite the episode's short length. The character's coming out had the sort of messiness that always comes with news that shakes up families, and while Loreen's assertions that it's "not not about" her are clearly meant to illustrate the roots of Hannah's self-centeredness, they're a true reflection of how Tad's coming out will alter their marriage and, subsequently, her life as well.

But as honest and sensitive as Dunham and Jenni Konner, who co-wrote the episode, and Jamie Babbit, who directed it (as well as cult classic coming-out film "But I'm a Cheerleader"), managed to be in showing Tad's coming out, his revelation -- like all revelations on "Girls" -- already feels like another plot point that will actually be all about Hannah. Of course, that's to be expected in a show where she is, ultimately, the protagonist. And it's also to be expected in a show that centers on the real struggles of becoming a grown-up, one of which is certainly coming to terms with the fact that one's parents are adults with their own lives and feelings and hurdles to overcome. Accepting the stark and scary humanness of people who have always seemed auxiliary to ourselves is challenging and necessary -- and it's not something we've seen Hannah do yet.

But it's difficult to believe that watching Hannah grapple with her father's evolution will involve much compassion or deep exploration of Tad's journey, unless we see a major change in the show's notoriously egocentric heroine. Maybe, though -- just maybe -- the end of her parents' marriage and the start of her father's life as a gay man (as well as the start of her mother's as a tenured professor) will alter Hannah's perceptions in a way that makes her finally become an adult.