The vast right-wing conspiracy is still real. Also, the media is really stupid

Fake scandals consume the news cycle. The real scandals go uncovered and unremarked. Our press is officially a joke 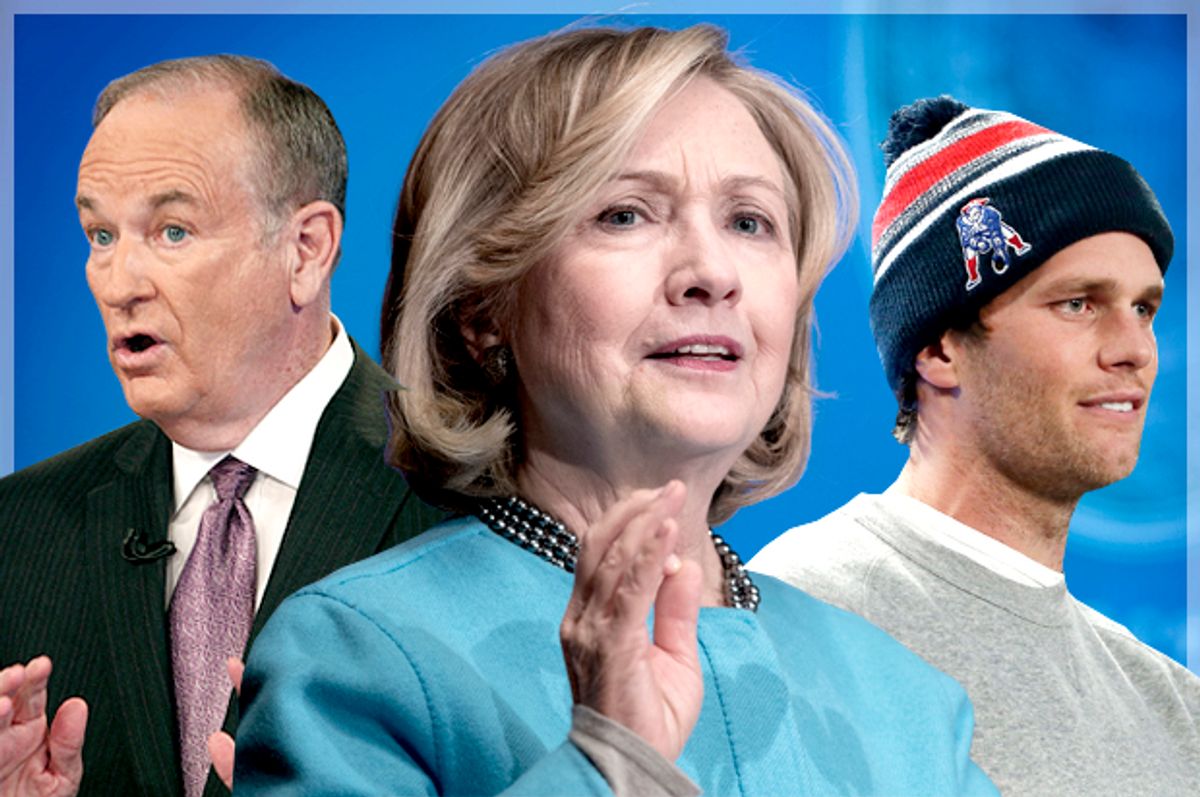 Let me start by admitting, upfront, how truly fucking boring I find the Hillary Clinton e-mail story. Not only is it unclear whether the former Secretary of State and future presidential candidate did anything illegal, but the fact that she’s willing to turn her emails over to the State Department casts doubt on the Republican fever dream that her now-infamous private in-box will contain mash notes from foreign donors to her husband’s foundation, or explicit instructions to her underlings to shred vital documents related to the deaths of four Americans in Benghazi, Libya.

It’s not a non-story, exactly. It’s more like a fishing expedition, a la Whitewater and Travelgate and the Clinton Christmas card list.

The primary motive of such stories isn’t really to root out genuine instances of moral turpitude. It’s to retail a narrative of insinuation that sells newspapers and baits clicks, one that the press has been working for three decades solid when it comes to the Clintons.

Emailgate (as it will surely be dubbed) is a story that arises from confirmation bias—without the confirmation of wrongdoing. Because the media have portrayed the Clintons as slippery and secretive for so many years—masters of the massive cover-up!—we should all assume that Hillary doing business on her private email is slippery and secretive and evidence of some massive cover-up.

But if you look at the history of the Clinton scandals, none of them, other than the Lewinsky nonsense, ever amounted to a hill of beans. All they did was prove to American news consumers (and to Hillary in particular) that the media really were engaged in a “vast, right-wing conspiracy” to take her family down.

Which might be part of why she wanted her email on a private, secured system.

What the Hillary email kerfuffle demonstrates more broadly is the warped filter our Fourth Estate uses in making editorial decisions.

After all, if reporters wanted to critique Hillary Clinton’s record as Secretary of State—something they should be doing, given her ambitions—they would do well to … critique her record as Secretary of State. They might look at the chaotic state of Libya, for instance, whose “liberation” Clinton helped engineer. They might scrutinize the policies she advocated in Syria and Egypt. They might, in other words, offer some perspective on how Clinton views the world and America’s role in it.

These issues, however, are complex and nuanced. They require a grasp of our diplomatic and military aims in several countries, the extent to which Clinton shaped those aims, the nature of our involvement in those countries, and the results of that involvement.

That’s not easy reporting. It takes time and money and patience. And it relies on a rather earnest conception of the “public interest,” (i.e. that citizens actually want to know how Hillary Clinton views the world and America’s role in it).

It’s much easier, of course, to produce stories that fit into the ready-made scandal template, which consists of:

a.) The dogged (and sometimes paranoid) pursuit of a smoking gun that will justify all the journalistic insinuation, or;

b.) Some private transgression, usually sexual in nature.

Nearly every major political story of the past decade falls into one of these two categories, from Obama’s birth certificate to Solyndra to the IRS farrago, from Monica Lewinsky to Mark Sanford to Anthony Weiner.

Week after week, reporters at major news outlets serve up these lurid morsels, and the usual Greek chorus of cable TV pundits and political handicappers chew them over for as long as the flavor lasts.

What’s at stake in these stories is almost never the morality of the policies enacted by our elected or appointed leaders. It’s ratings, pure and simple.

We’ve reached a point where traditional journalism is being steadily squeezed out by the toxic amorality of scandalism.

For an especially disheartening example of this paradigm in action, consider the hue and cry over Bill O’Reilly’s serial exaggerations concerning his derring do as a reporter.

By all indications, the media believes that the boastful lies he told decades ago to make himself seem brave are more important than the glaring deceits he peddles every night on his show.

But just imagine if reporters focused on those, rather than leaving Jon Stewart to do the dirty work?

Ditto the sad saga of Brian Williams. The NBC anchor carried the Pentagon’s water for years when it came to our disastrous adventure in Iraq. But his journalistic credibility only came under fire when he lied about his helicopter coming under fire in the field.

Or consider the coverage of the NFL’s woes this past season. For nearly a month, reporters whipped themselves into a froth over the off-the-field transgressions of two star running backs, Ray Rice, who knocked his wife unconscious in an elevator, and Adrian Peterson, who was indicted on child injury charges for disciplining his four-year-old son.

On the very same day that the Peterson story broke, a report surfaced revealing that the NFL’s own actuaries estimated that 30 percent of former players would suffer long-term cognitive ailments (i.e. nearly a third of the employees in America’s most famous workplace could expect to face brain damage).

This was shocking news, especially in light of the league’s longstanding efforts to deny, or obscure, the link between football and brain trauma.

And yet the vast majority of the ensuing coverage focused on what sort of punishment Rice and Peterson should or would receive, and whether NFL commissioner Roger Goodell had handled the scandals properly.

This is what scandalism does: it reduces the public discourse to a giant gossip session. It focuses our collective attention on the wrong questions.

It may turn out that Hillary Clinton wanted a private email system so she could hide nefarious deeds. But it’s much more likely that this “scandal” will turn out to be more sound and fury, signifying nothing.

The beauty of scandalism, from a business perspective anyway, is that scandal stories don’t have to lead to a revelation of corruption to be considered successful. They don’t have to deliver on their promise, so long as the pitch is seductive enough to dominate the news cycle.

To use an analogy more appropriate to the milieu: scandalism is the journalistic equivalent of spam.