"You can’t tame grief": Helen Macdonald on her bestselling memoir "H Is for Hawk" 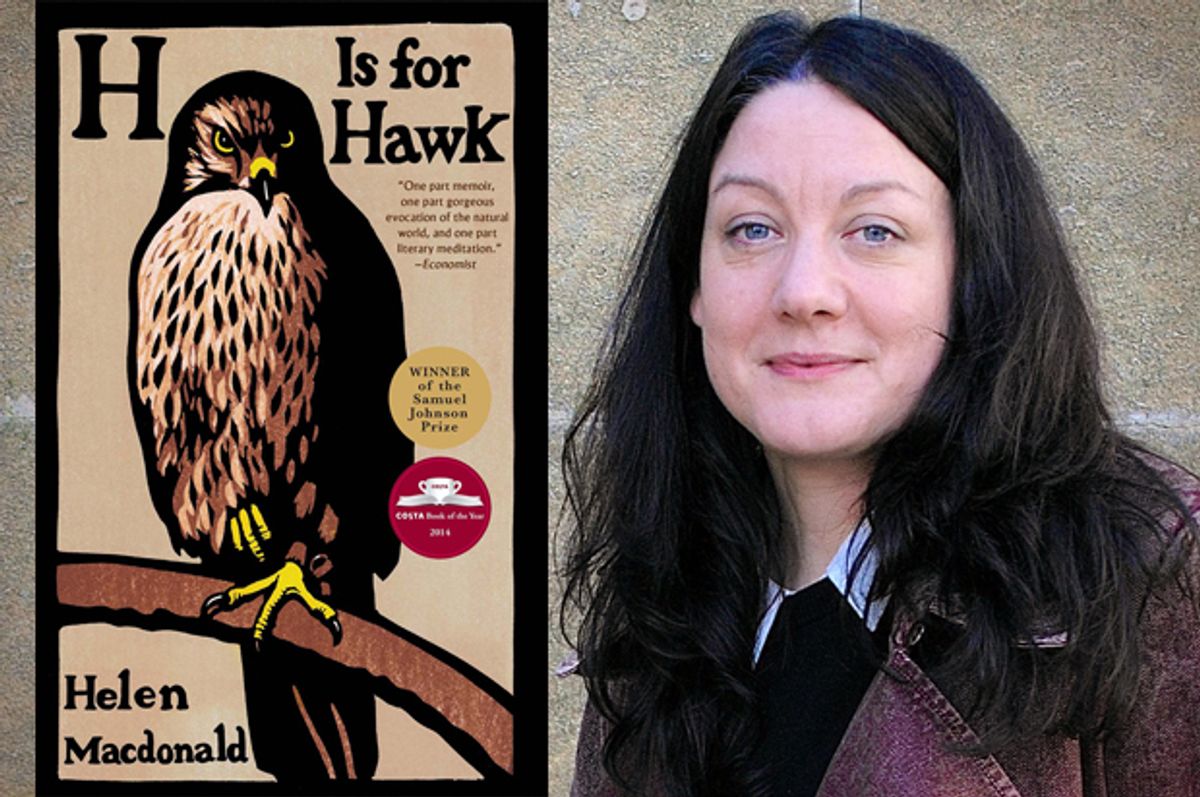 People deal with grief in different ways. Some people lock themselves indoors, shut the curtains, unplug the phone and let the sensation wash over them. When Helen Macdonald’s father unexpectedly died of a heart attack in 2007, she found herself suffering in this state of endless twilight. But then, in the depths of depression, she began to dream about hawks. Eventually, it became an inevitable fact that the bloody and murderous goshawk she could not stop dreaming of would enter her life.

For Macdonald, this is not quite as unusual as it sounds. Somewhat of a polymath -- she is a historian, poet, naturalist and illustrator -- she has been obsessed with falconry from a young age. At 8 years old, Macdonald stumbled across "The Goshawk" by T. H. White. Despite his bombastic exterior, White, best known as the author of Arthurian legend "The Once and Future King," was a perpetual outcast because of his sexuality. "The Goshawk" is White’s torturous account of his attempt to train the notoriously difficult bird in order to escape his own demons.

Macdonald delves into this ill-fated period of White’s life, and masterfully contrasts it with her own journey to overcome grief with Mabel, a goshawk she bought for £800 from a man she met on the Internet. Since its UK publication in July 2014, "H Is for Hawk" has proved to be a bit of a puzzle for critics: part memoir, part nature writing, part fiction, the book defies conventional classification. Despite this the reviews have been unanimous in their praise -- the book is without doubt a triumph.

After being labeled best book of the year by the Guardian and the Economist and winning the Samuel Johnson Prize, "H Is for Hawk" went on to win the Costa Book Award in February. Already a Sunday Times bestseller, the book was released last week in the U.S. It received a glowing review by the New York Times in its first major American review and debuted at No. 8 on the hardcover nonfiction bestseller list, where it's currently on the rise.

Salon spoke with Macdonald about her upbringing, writing about and through nature and the surprise success of her memoir.

What was it that made you want to train a hawk in order to overcome your grief?

I repeatedly dreamed of goshawks after my father died and some unconscious compulsion told me that training a goshawk was necessary. You can’t tame grief, but you can tame hawks. And the goshawk, as I explain in the book, wasn’t just a deep distraction. It was everything I wanted to be: solitary, self-possessed and free from human emotions. I didn’t want to be me anymore. I wanted to be something like a hawk: fierce, living entirely in the present and untouched by loss.

The depiction of the hawk is beguiling: at first it is menacing and alien, but the reader soon empathizes with it. Did you go out with the intention of writing a nature book?

Not consciously. I actually had a very strong sense that I didn’t want to write a book that was nature writing. Growing up I used to love those books about nature that were written in that wonderful expert tone. They would say: This is the natural world, and this is what’s in it, and this is what it means. I wanted to write a book with more than that one voice, and to play with genres.

As the book progresses, all those different styles of writing crash up against each other. I think grief shatters narratives, and that’s what I was trying to do.

What similarities did you feel there were between the experiences of T. H. White and your own?

We both fought our very different demons through living with a hawk. White’s demons stemmed from his abusive childhood and struggles with his sexuality. Mine were the dark demons of grief and loss.

He’s a really interesting character, and I still feel quite conflicted about him as a person. One of the themes of the book is what it’s like to place yourself in other minds, and one of the minds is the non-human mind of the hawk, and the other one is T.H. White’s mind. When I went through all of his unpublished material in Texas — his journals, his diaries, his manuscripts — I got this strange sense of haunting. He was a deeply troubled man. In some of his letters you could see where the tears had hit the paper. He would write these confessions of self-abuse and then rub them out. Then he would try to work out what he had written when he was sober again.

You describe yourself as a watcher in the book — constantly observing things from a very young age. How might that have affected your way of thinking and your writing?

Being a watcher is described in the book as the "chameleon consciousness" of Keats. That sense that one can remove oneself, and become other things and inhabit other voices. Looking at what I wrote, it seems like I must have had a very miserable childhood to have wanted to escape like that, but it was a way of experiencing other ways of looking at the world. The book tries to describe the sense of being able to see through the eyes of another person, and see through the eyes of a hawk.

Your family and environment clearly influenced you strongly when you were growing up. How did the experiences you and your father shared help shape the book?

We were really good friends. I hope it comes across in the book that he was an incredibly nice man. Hopefully it doesn’t seem like a hagiography, but he was an extremely patient, quiet and interesting man, and he really did teach me how to look at the world. He was obsessed with airplanes, and had this huge library of books on how to identify things. We had books on mosses, liverworts and fish — he loved field guides, and I loved them too because they were always knocking around the house.

My favorite one ever, he brought home one day a field guide to the "nymphal stages of the Sahelian grasshoppers." I remember laughing my head off, saying, “Dad, you’re never going to see a nymphal stage of a Sahelian grasshopper,” and he opened the book, and there were these exquisite paintings of little tiny locusts, and he said, “Look at them. Look how many there are,” and I think that really sums it up. He was full of a joy that the world was full of such diverse things, and that people go through their lives and not know them all. The more you know, the more extraordinary the world is.

How do you feel people's relationship with nature and the wild has changed over time?

We don’t get much opportunity to interact closely with wild animals anymore. They’ve become replaced with images of themselves in print and on-screen. This makes them mean less and less to us, and part of the message of the book is that my time with the hawk instilled in me a love and wonderment for the natural world that is something we need more than ever before. You don’t fight to protect things, to conserve them, unless you know and love them.

Your book has received universal praise from critics and readers alike. Can you describe what the past year has been like?

When I finished the book, I did the typical things that a writer does. You sit at your desk, you weep because it’s hard, and you eat a lot of junk food and you’re a total hermit. And then you send the book in, heart in mouth, and at that point, I was pretty convinced that no one would ever read it because it was such a strange book.

Then it came out and things went pretty wild. I didn’t expect any of it to happen the way it has. Two days ago I was on a Norwegian TV program with Geri Halliwell, Ricky Gervais and Kanye West, and at that point, I kept on thinking: This is like one of those Hollywood movies where people are on their operating tables, and then in their last gasp of life they have these ridiculous fantasies about what’s happened to them. I just thought, this can’t be real.