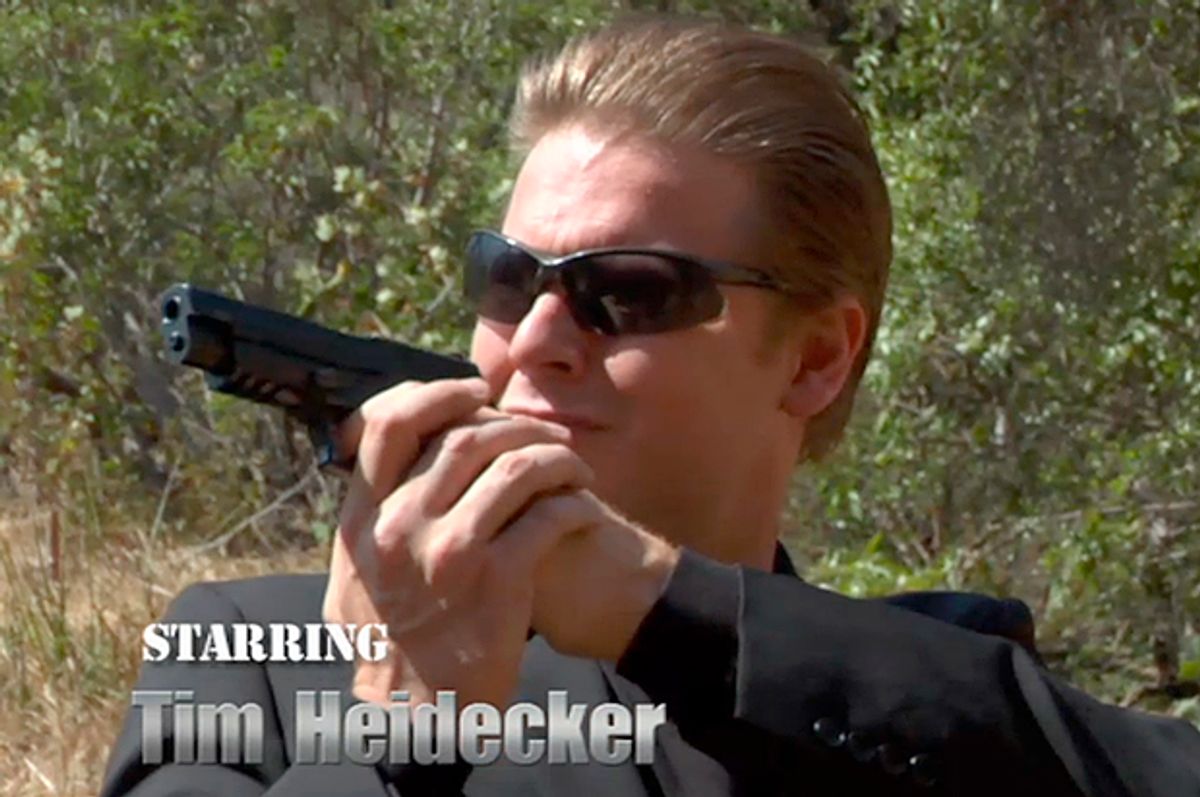 Let’s play a game. Who said it: Jack Decker or Chris Kyle?

Jack Decker, by the way, is the star of “Decker,” a low-budget Adult Swim TV mini-series now entering its second season that’s written, produced, directed by and starring Tim Heidecker — the Tim of “Tim & Eric Awesome Show, Great Job!” and other collaborations. Chris Kyle, as we all know, is the hero at the heart of "American Sniper," which just surpassed “The Hunger Games: Mockingjay Part 1” as the highest domestic grossing film of 2014. Clint Eastwood's film is not exactly a realistic portrait of war, but it is a realistic (not to mention propagandistic) portrait of the ideology that supports and promotes war — and one that had very real effects. Islamaphobic sentiments and threats skyrocketed after the movie hit theaters, and it’s not entirely coincidental that support for yet another war in Iraq is now on the rise.

“Decker,” whose second season premiered yesterday, is a stripped down, super low-budget satire of “American Sniper” — with obvious "24" roots, too — that pushes the glorification of war and violence in the name of patriotism to hilarious, illogical extremes. Decker is a CIA agent who fights the Taliban “mano a mano” in the United States and in Afghanistan — in Season 2, he's set to also fight ISIS — though all scenes are clearly filmed in nondescript Los Angeles back lots. It’s Decker’s job to “kick ass” and carry out perilous missions that “pussy-ass politicians” like the president (played by fading B-list action star Joe Estevez) won’t carry out themselves.

In the show’s first season, that meant securing a briefcase that holds the Taliban’s plans to destroy America and stopping their operatives from blowing up both Central Park and the Super Bowl with nuclear bombs. In the season 1 premiere, Decker, who is more Oath Keeper libertarian than traditional conservative, complains that America’s “DRX patriotic cruise missiles could take out one of [the Taliban’s] villages where the rats hide in 10 seconds, but our pussy-ass politicians are too scared to pull the trigger.” In another episode, Decker pulled a gun to the president’s temple. “Do you want your brains splattered on the desk?” he asked.

Occasionally Decker seeks help from CIA “code breaker” Kington (Gregg Turkington), a talking head on what looks like a portable DVD player circa 2004, but mostly he works alone. And all in the name of America! “I never let America down,” Decker boasts after killing a member of the Taliban named Abdul, a character played by a blue-eyed white man who speaks atrocious mock Arabic and wears something like a rope around his dome. Heidecker’s approach is obviously risible, but Decker’s extreme, violent brand of patriotism has roots in reality. Chris Kyle killed Iraqi people for a living (all in the name of America!) and enjoyed it. In his mind, Iraqi people (children included) weren’t really people; they were savages. “Savages,” he wrote in his autobiography, “despicable evil. That’s what we were fighting in Iraq…I only wish I had killed more.”

By stripping down the production values to basement-level, “Decker” can poke merciless fun at the notion of the Oscar-bait war-glory film with glee. Like most things (if not everything) that Tim (or Eric) touches, “Decker” is intentionally sloppy-looking, underfunded, amateurishly edited and looks deliberately out-dated. Scenes of each 3-7 minute episode are portioned out unevenly; recaps of previous episodes take up as much as one-third of current episodes, and in one stand-out scene, Decker rides his motorbike around bends and corners for so long that the show’s theme music, a shredding, dad-ish guitar riff, repeats three times. The show’s title cards look like a low-fi nexus of '80s cable-TV cop shows and high school Power Point presentations. Green screen graphics are slapdash.

Decker himself looks like a Regular Joe who wants to dress like Jack Bauer but can’t afford the outfit, so instead buys a cheap imitation from a thrift store. He relies on about four facial expressions to convey his emotions: he squints, scowls, smirks and Blue Steels. Also, he mangles his lines. “One of these plans—plans,” he tells the president upon cracking open a briefcase containing the Taliban’s blueprints to destroy America, “is a plan for them to blow up The World Trade—the, uh, Super Bowl, next week.”

And the slapdash aesthetic translates into world-saving action sequences that deliberately push beyond the bounds of plausibility, like when Decker catches Abdul, whom he previously thought was on America’s side, trying to blow up Central Park with a nuclear bomb (the scene, like most, appears to be filmed entirely in L.A.). “You can’t stop me!” cries Abdul in his faulty mock Arabic. “It’s Allan’s will!” [Sic, of course.] Decker then strangles Abdul to death and steals the bomb. “Oh shit the bomb we’ve got to get it airborne,” Decker slurs. He twirls four times, throws the bomb 20 feet into the air, and watches it explode into a Thinkstock image of the American flag. It’s as pat of a resolution as when Eastwood's Chris Kyle cures himself of post-traumatic stress disorder by teaching a disabled war veteran to shoot a gun again. “I feel like I got my balls back,” drawls the veteran.

Season 2 (“Decker: Port of Call: Hawaii”) premiered yesterday. It’s set at least partly in Hawaii, where Decker is trying to vacation, though as his weary voiceover notes, he hasn’t had a vacation in a very long time. “I spent the last decade saving my country’s ass over and over again, and for what? Just so they can tax-and-spend on entitlements that people don’t deserve?” Watch:

Decker might appear upon first watch a harmless bunch of sloppy gags without reason or referent, or even just one big hermeneutically-sealed inside joke. But Heidecker (along with Eric Wareheim) is a master at making bad-in-a-good-way shows that, like Shakespearean fools — those fools with satirical tongues, to be precise — get away with saying so much, precisely because they seem to say so little.

So, who said it, Jack Decker or Chris Kyle? It’s hard to tell, and that’s disturbing. When you can’t tell the difference between the foolish satirist and that which he satires, there’s reason to be afraid.