How to make a viral hit: The "Kimmy Schmidt" theme team reveals the secrets of achieving "maximum catchiness" 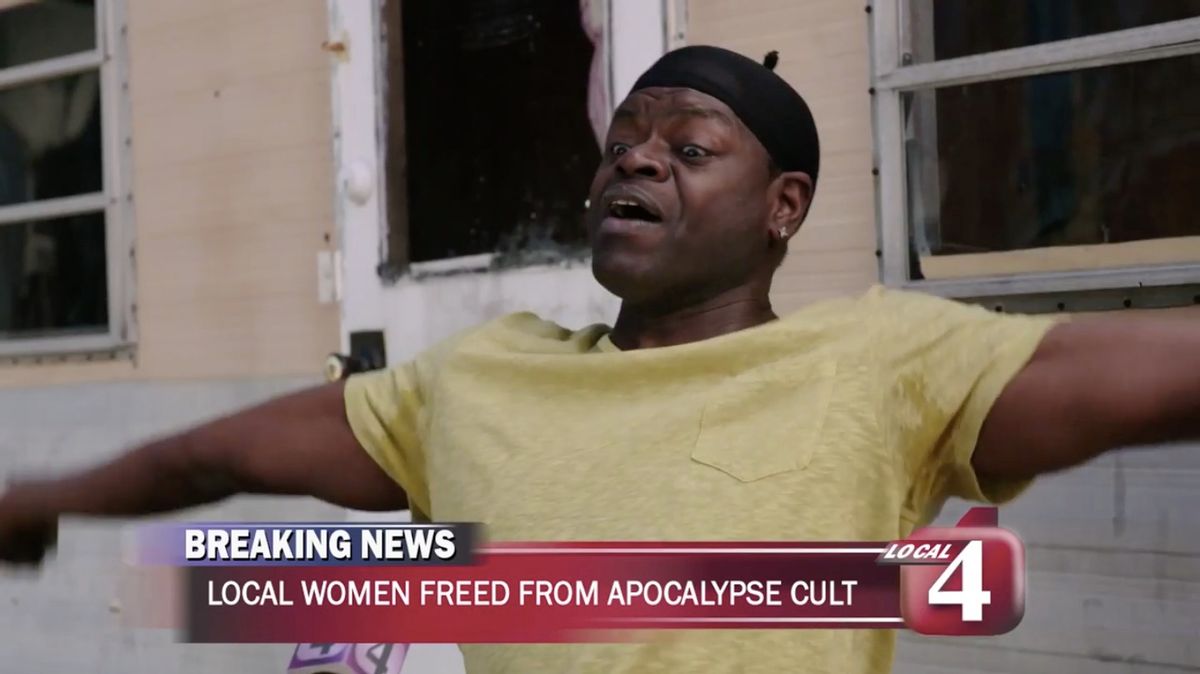 If you binge-watched Tina Fey and Robert Carlock’s new Netflix comedy “Unbreakable Kimmy Schmidt” this weekend, chances are you’ve been humming “Unbreakable! They alive, damnit!” to yourself pretty much nonstop since then — because damnit, that theme song is catchy. Composed by Jeff Richmond and remixed and auto-tuned by the Gregory brothers of the famed "Songify the News" series, the song stars comedian Michael Britt as an Antoine Dodson-esque onlooker -- he of the famed “Bedroom Intruder” video, another Gregory Brothers creation -- whose news segment goes viral in song form. And the video's virality has transcended the fictional world — the Gregorys' extended "Songify This" version already has over 300,000 Youtube views.

Aside from being an insatiable earworm, the theme song is one of those truly spot-on theme songs that perfectly encapsulates the tone and voice of the show: From its strong feminist roots (sing it with me: "Females are strong as hell!") to its sharp commentary on the contemporary world of media and celebrity culture into which Kimmy is thrust after emerging from 15 years underground.

"They had that in mind as being a cultural phenomenon that happens now, the idea of news stories going viral. That became part of the fabric of this show, and an easy way for the audience to understand Kimmy and the other women and what they're going through,” explained Evan Gregory, when we spoke to him on the phone this morning. "There are other timeless theme songs out there like the "Cheers" theme song, that really capture the character of that show. This is a really unique case where the theme song is actually derived from something that plays out in the story of the first episode and uses the vehicle of the viral video, something that's very current and feels familiar and now, to deliver that song.”

As well as the longer remixed version that the Gregorys released via their YouTube channel:

Evan Gregory says that Fey, Carlock and Jeff Richmond -- Tina Fey's husband and the show's composer -- called them up to work on the project in December, when the whole show was already wrapped. According to Evan, Fey and Carlock had conceived the notion that the characters would be discovered and then go viral as part of a news story, and that that would the introduction, but it was a stroke of luck that they found the Gregorys to do the actual songification.

"Somebody who was working on the show branding knew us and it was like, oh, maybe we could get the Gregorys to do that thing that sounds like the Gregorys!” Evan said. Despite their many past successes, Evan Gregory still feels like this was one of the highlights of his work to date. “Being able to work on this project was like being called up from the NCAA to, like, shoot some threes with Kevin Durant,” he joked.

While Richmond had already composed the song's melody, it was up to the Gregorys to give the track that choppy Autotuned sound that has become so iconic over the years. “They had shot the thing as best they could to look like a news interview, and they shot all this material that got left on the cutting room floor but provided a lot of options to make the best possible song," explained Evan. "So we could just come in and make it sound as good as possible using all possible witchcraft and technology to get the songification right and achieve maximum catchiness.”

Why is the song so catchy? Aside from years of experience churning out viral hits -- from "Bed Intruder" to "Winning" and "Double Rainbow" -- Evans attributes much of the song's success to its composition and its star.

“It's a combination of things: part of it is Jeff Richmond's genius in his approach to the genre and the feel of the song. From our standpoint, the most important factor is the unintentional singer, who, in this case, is a fictional character, Walter Bankston, played by a real person, Mike Britt, whose voice— even though he's doing it accidentally— is hitting this sweet spot that's somewhere in between James Brown and Joe Cocker," explained Evan.

"Part of it is technical, in terms of the sonic quality of his voice, but part of it is very nontechnical. It's just emotional and how, as an actor, he was really living in that character and just getting into it and passionately speaking about what the character saw and what he saw the women going through. That emotion really translates and helps the listeners get into it; it really resonates,” he added.

Stand-up comic Mike Britt played the role of Walter Bankson, which was inspired in part by Charles Ramsey, the man who helped rescue three kidnapped women in Cleveland, Ohio (and was immortalized by the Gregory brothers in "Dead Giveaway"). Britt likewise attributes the song's success to its passion and energy.

"I think it’s also that energy in it, and believe it or not, I think throwing a little cursing in changes things. Damn it isn’t a real terrible curse word, but what other theme song do you know that even has a curse in it? You can’t even think of one," said Britt.

Britt pointed out that the message of the song doesn't hurt, either. "Let’s be honest, when a woman hears somebody say, 'Females are strong,' they’re like, 'Finally.'"

Britt said that it only took a few takes to get the whole thing right, and aside from being reminded to articulate key words or deliver in a certain tone, he had a lot of leeway in bringing his own emotion and expressiveness to the character. “The glasses you see me blowing on, that was my stuff. Only the words, like say this, specifically, because my thing was being Auto-tuned so I had to say exactly what they needed to say so it could be turned into song."

Britt, whose character (spoiler!) ends up coming back later in the season, says he hopes he’ll be back for season two. His character's ending, for now, remains ambiguous.

"[Fey and Carlock] told me they were just going to have me walk away, and as I was walking away, I would vanish," he said. "So people watching think, 'Was he even real?' But I was like: he has to be real because he got interviewed. The whole thing couldn’t have been fake — the reporters, everything. So instead of doing it that way I think they decided to just, well you saw -- how I just walked away. I didn’t vanish, I just walked out of the shot. So I believe that I’ll be back. Hopefully I’ll be back."

Whether he’s back or not, it's safe to say he wont be able to get his handiwork out of his head -- even if he can't get the words quite right. "I watched the first few episodes and even when I wasn’t in the house I was like, 'Unbreakeable. I’m alive damnit!' I just kept saying 'I’m alive, damnit.'"

The Gregorys, too, are struggling with the mega-catchy Frankenstein that they've created: “If anything, we've got it worse! We're scrubbing through the song hundreds of times to get it exactly right. Even if you binged the whole show over the weekend, you've listened to the song ten percent as many times as I have," joked Gregory. “Yeah. I'm deeply afflicted. With the most delicious disease ever contracted."

At least they're not alone: