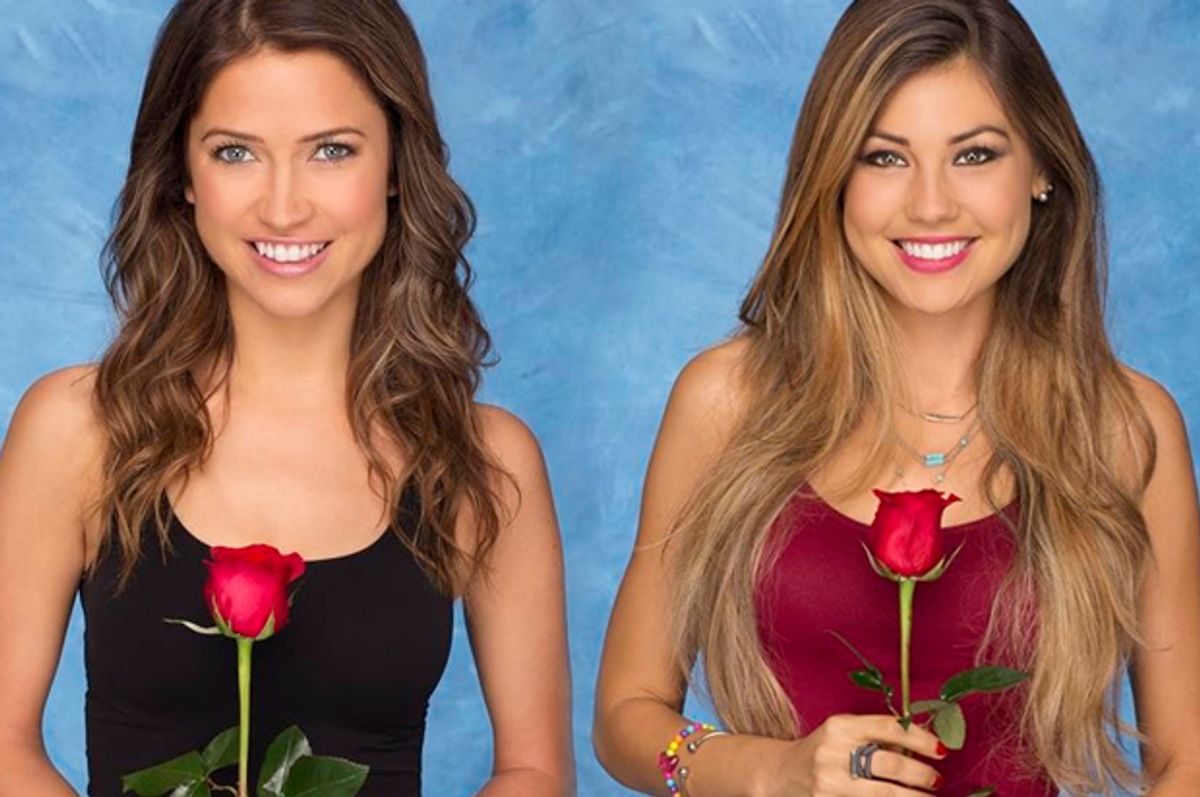 I’ve watched the past several seasons of the "Bachelor" franchise with friends in San Francisco who have a weekly viewing party. We order Indian food, drink wine and mostly talk over or at the show. We are a bunch deeply dedicated to watching the series in a mocking, ironic way -- although the show is increasingly becoming self-aware and doing the mocking for us. We announce ourselves as Team [insert totally generic girl name] or Team [insert a different totally generic girl name], psychoanalyze contestants (a popular idea this season was that Becca was a sociopath) and develop elaborate theories on who will get the final rose.

All of that is to underscore the gravity of what came out of one of my hosts’ mouth when Chris Harrison announced on last night’s finale that the next “Bachelorette” would star both Kaitlyn and Britt from this season. This time around, a group of 25 men will pick which of the two women, in Harrison’s actual words, “would make the best wife.” That’s when my friend Sara announced in a huff, “I refuse to watch this. No more parties!” She wasn’t joking, either.

Judging from the Twitter reaction, my host was not alone in her outrage. Sharleen, a contestant on Juan Pablo’s season, tweeted, “This is sick” followed by the hashtags “#TheBachelorette #misogyny.” She wasn’t the only one to use the m-word. Consider:

It's amazing the amount of progress women have made in this world... Until @ABCNetwork declared this new dual Bachelorette twist #misogyny
— Michelle Theresa (@VitelliMichelle) March 10, 2015

"The 25 men get to decide who will make a better wife." Did I hear that right? As if #TheBachelor wasn't misogynistic enough. — Danica Lo (@danicalo) March 10, 2015

The sound of hundreds of Sociology majors revising their Cultural Constructions of Misogyny in Reality TV thesis statements. #bachelorette

Countless more stopped shy of arguing that the decision represented a hatred of women and instead focused on the basic inequity of it: “Even on The Bachelorette, the men still somehow get all the power and pick between the two. #thataintright.” The day after International Women’s Day, no less! That’s not to mention all the tweets that revolted against the decision for other reasons -- namely, Britt, who was portrayed as a two-faced seductress and friend to no woman, and who became the villain of this season. As former Bachelor Sean Lowe tweeted, “Judging by the hundreds of tweets I'm seeing, no one likes this duel bachelorette idea.”

That’s to put it lightly. People are losing their damn minds over this twist. Why, though? Folks generally don’t get so worked up over contest rules, especially when it comes to reality TV. It’s a matchmaking show, it isn’t deciding the next president of the United States or awarding the Nobel. But this decision tapped into something bigger than just who would get the final rose -- and I'm not just talking about viewers' general disdain for the seemingly manipulative and conniving Britt. It upset the delicate pH balance of the show’s sexism. Typically, the “Bachelor” sticks with gender inequalities that are still culturally acceptable -- you know, the men always propose and it’s the women who are expected to relocate for love. There are the hyped-up catfights, the occasional slut-shaming and, of course, the ever-present “‘desperate bachelorette’ trope,” as Jennifer Pozner put it. This is stuff that’s tolerable to most of America. It’s the kind of sexism that generally receives a shoulder shrug and a “relax, don’t take it so seriously.”

But the sexism is always there and ever threatens to alienate its female viewers, even the more conservative ones. The one thing holding it all together, the thing that for so many viewers makes it a guilty pleasure as opposed to a hate-watch, is that each season of “The Bachelor” is followed by a table-turning season of “The Bachelorette.” OK, so there is still so much that is capital-p Problematic about it, but at least the women get their chance. We are just so darn thankful for table scraps. It isn’t ideal -- as Kaitlyn herself said when awkwardly brought onstage with Britt at the “Bachelor” finale to discuss their shared bachelorette-hood -- but it could be worse. Put in the terms of sexual empowerment, the “Bachelor’s” female viewers are basically that chick who fakes orgasms and makes out with other girls at bars. BUT IT’S SOMETHING.

Now, that something has effectively been taken away. That is true even though the show has pulled this before with men: In 2004, two guys were chosen to battle it out to be The Bachelor. As Emily Yahr reported at the Washington Post, "The 25 women chose between Byron Velvick and Jay Overbye in the season premiere, giving a rose to the man they preferred." It’s unclear exactly how this newfangled “Bachelorette” will go -- will the 25 men eliminate one of the women on the first night or will the girl fight be drawn out longer? Either way, what viewers saw was an enraging power imbalance in the wake of a season that, even more so than average, revolved around women fighting over a man. Said one woman on Twitter: "The Bachelorette is the show where the women have the power and now the men are getting the power! No! Ban men! Ban Chris Harrison!" Another wrote, "Even on The Bachelorette, the men still somehow get all the power and pick between the two. #thataintright." That power imbalance has always been there, right under the surface, but with this move "The Bachelor" made it un-ignorable, even to the most blissfully ignorant or in denial.

Sure, I'll probably tune it, this time around as a straight-up hate-watch. I'm just not so sure I'll have anyone to watch it with.