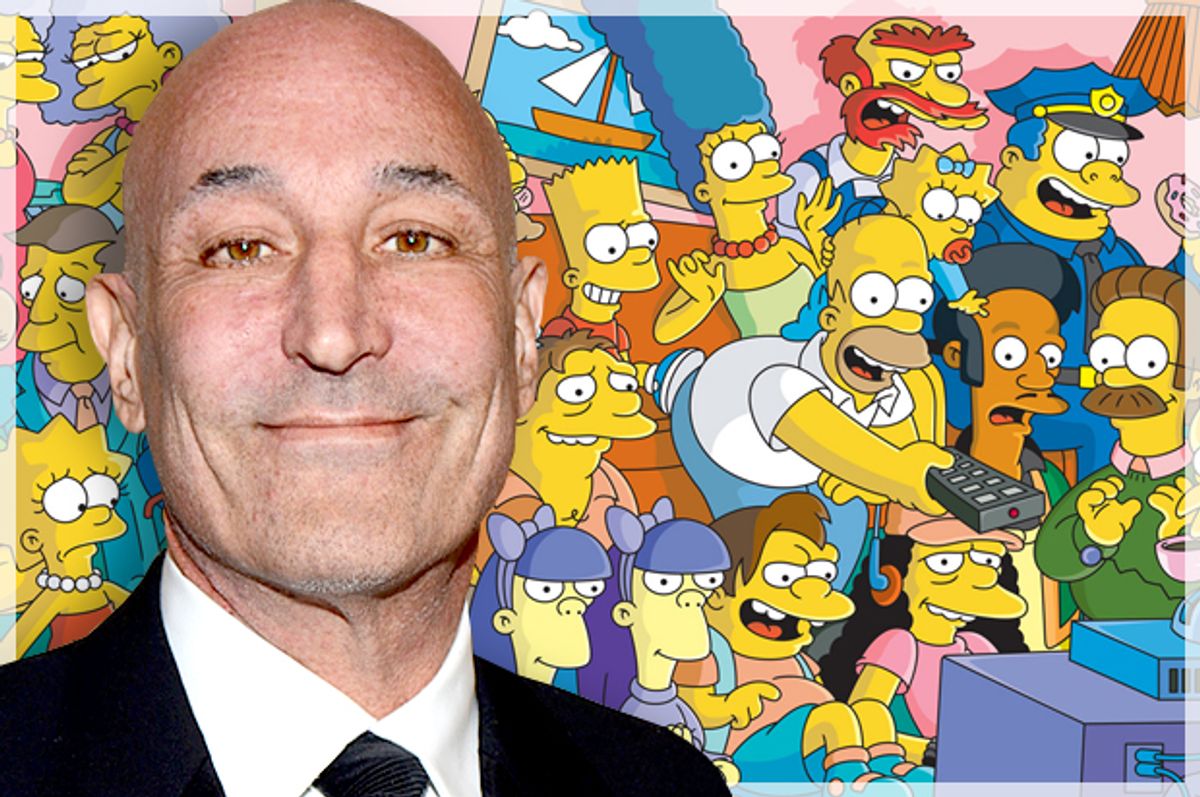 “‘The Simpsons,’ created by Sam Simon, based on an idea by Matt Groening.” That statement might seem a little blasphemous. I certainly thought so when I read it in 2008. I originally saw the quote on a Simpsons message board while looking for clues as to why co-creator Sam Simon, who passed away Sunday at 59 after a battle with terminal colon cancer, left “The Simpsons” in 1993.

Unlike many of my brethren, I was a Simpsons obsessive who didn’t spend much time debating the relative merits of “Marge vs. the Monorail” over “King-Size Homer” online (as if there’s any debate; it’s “Monorail,” hands down). I knew all too well that the show inspired a firestorm of debate, but that was primarily thanks to the many reflexive references within “The Simpsons” itself and in the episode commentaries I would devour when each new season was released on DVD. At the time though, I was so determined to get a straight answer about Simon’s departure that I started poking around online. Was it the show’s direction, a “falling out” with Matt Groening, his contract simply expiring, showrunner burnout?

I never found a concrete answer. What I did discover was a proper appreciation for Simon’s role in both creating “The Simpsons” and turning it into the predominant influence in the world of comedy over the last quarter-century — in both direct and indirect ways. Had I not gone down that rabbit hole, I may have never realized that Simon was anything more than a Howard Hughesian recluse pounding away on his typewriter.

Offbeat cartoonist Matt Groening conceptualized a family of terrifyingly-coifed, yellow, outré characters. No one can debate that. However, it was Sam Simon who somehow managed to turn those sketches into robust and relatable human beings. He didn’t do it single-handedly, but his fingerprints are all over the show.

“You can’t overstate his contribution to ‘The Simpsons,’” former writer and late-night kingpin Conan O’Brien said in 2013. “No one’s smarter than he is.” Those are big words coming from a man widely recognized as one of the smartest comedy writers of his generation.

Simon was a veteran television producer who’d worked with co-creator and show business demigod James L. Brooks (the man responsible for “Broadcast News,” “Taxi,” “The Mary Tyler Moore Show” and “Terms of Endearment”) in the past. He knew how to assemble a crew, he knew how to structure a show, and he knew how to tug at the heartstrings. Those skills are integral to the creation of a transcendent television show. Without them, “The Simpsons” simply wouldn’t exist.

If all Simon did was hire series-defining writers like Al Jean, Mike Reiss, John Swartzwelder, George Meyer and O’Brien, that would be enough to cement his legacy. He did even more, though. He helped shape the tone and direction of the show and craft the characters’ relationships.

Simon was responsible for some of the show’s funniest installments, like “Treehouse of Horror III,” the evil talking Krusty doll Halloween episode, not to mention its headiest (“Black Widower”, a Sideshow Bob classic) and most touching (“The Way We Was,” the show’s first flashback episode). And even small touches, like the absurd cut-away gag, became animated comedy staples thanks to Simon’s pioneering use. “The Simpsons” was always as its best when it was equal parts ridiculous, smart, and emotionally charged. That’s what Simon exemplified as a writer, producer, and co-creator.

His fellow “Simpsons” writers and showrunners agree. “He just grasped things that became brilliant Simpsons staples and did them in a flash,” said Jean, who followed Simon as a showrunner, in Entertainment Weekly yesterday. “He said, ‘Let’s imply that Smithers is in love with Burns but not make it a big deal and people are gonna catch on and it’ll be really cool.’”

“I’m here to tell you, the real creative force behind ‘The Simpsons’ was Sam Simon,” former writer Ken Levine told Variety. “The tone, the storytelling, the level of humor – that was all developed on Sam’s watch.”

Former producer Jay Kogen had similar sentiments, particularly when it came to the world-building many animated shows now participate in — animated shows that wouldn’t exist in the first place without success of “The Simpsons.” “Sam had this amazing conception of Springfield. He kept expanding the idea,” Kogen explained to the New York Times Magazine in 2001. “He knew the freedom that animation provides and utilized it to the full extent. The big story at the time was 'Cartoonist breaks through into TV.’ It could also have been, just as easily, ‘Old-time TV producer breaks through into TV.’”

Simon’s lasting effects on pop culture can be found in slightly more indirect ways as well. Just look at the accomplishments of former Simpsons staffers like Brad Bird (“The Iron Giant,” “The Incredibles,” “Mission: Impossible — Ghost Protocol”), Greg Daniels (“King of the Hill,” “The Office,” “Parks and Recreation”), David Silverman (“Monsters, Inc,” “The Road to El Dorado”), Jim Reardon (“Wall-E,” “Wreck-It Ralph”), and O’Brien, among so many others. Granted, they weren’t all Simon’s hires. But without his guidance, the show wouldn’t have lasted long enough to employ any of them. You can even dig further and investigate the creative family tree of someone like Daniels, who was something of a Simonian figure himself on “King of the Hill.”

To say Simon’s influence is outsize is an understatement. As O’Brien said in a tweet after word broke of Simon’s passing: “Sam Simon's contribution to the spirit of sharp, well-observed comedy is incalculable.”