Haters will hate. Democrats may fret. But Clinton’s email troubles reflect a larger challenge that won't go away 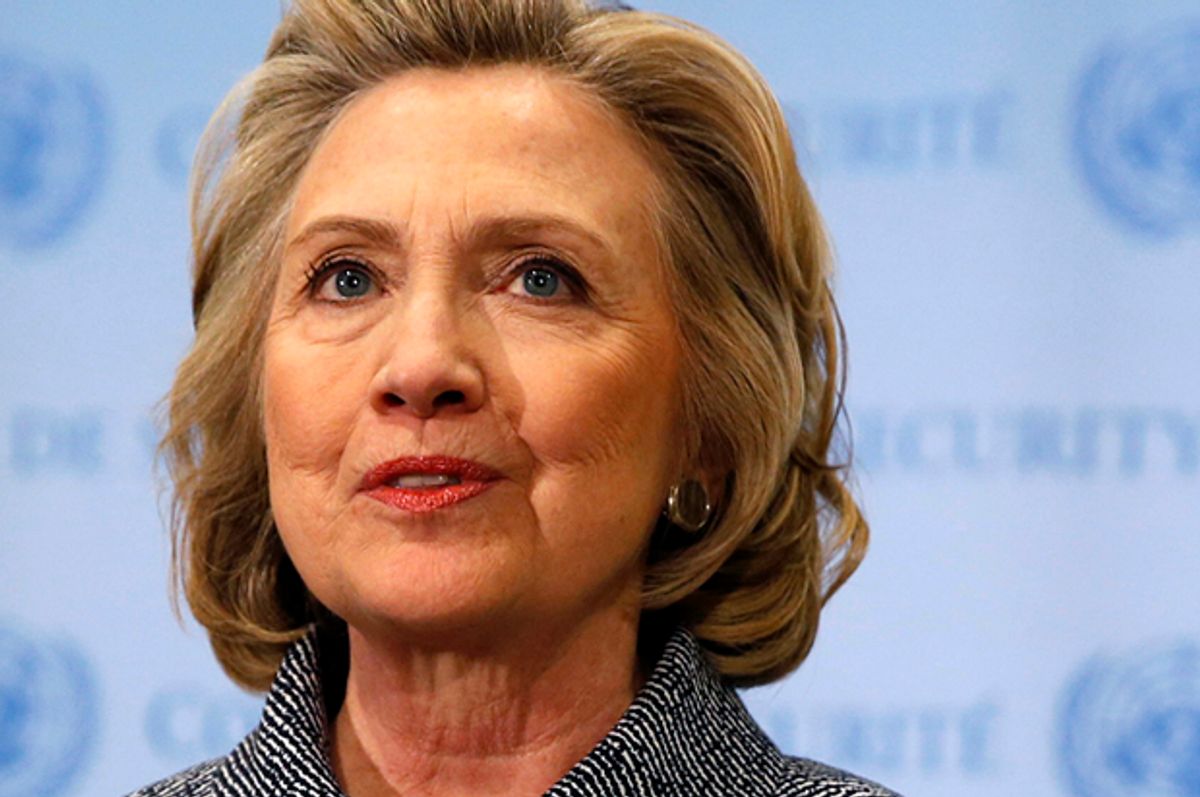 Hillary Clinton still doesn’t get it. Maybe she never will. And maybe that’s just fine.

The former secretary of state and current 2016 frontrunner doesn’t get why anyone but her right-wing enemies would think she did anything wrong when she mixed personal and professional email on a private account, stored on a private server, during her time at the State Department. She broke no laws, she turned over her professional email when asked to, and it will soon be displayed to the public in an “unprecedented” show of transparency, she said Tuesday.

Clinton’s ultimate reasoning – that even if she’d used two different accounts, she would still be the one who decided what were matters of state – actually makes some sense.

But she also doesn't get that when she has to face down the media, in a real or a trumped-up scandal, she is expected to take questions patiently and without seeming rattled or aggrieved, while at least trying to pretend that she doesn't believe everyone in the room is hopelessly biased against her.

So Clinton’s Tuesday press conference, in which she was alternately proud and defensive, probably didn’t convince anyone of anything they didn’t already believe. If you think she’s shady, then she surely looked shady to you, with her eyes too often cast down at her lectern, not at her audience. If you think she’s the persecuted victim of a vast and metastasizing right wing conspiracy, she handled an untenable situation the best anyone could.

If you’re basically sympathetic to Clinton but traumatized by two decades of Clinton drama, and unsure if you can face another six to 10 years of this feeling? Well, you probably still feel queasy. Leaving aside theatre-critiques of her performance, the episode shows the down side of her decision to delay the launch of her official campaign. She has all the scrutiny of a top-tier candidate, she faces an industry of Clinton haters, some of them in the media, and she doesn’t appear to have an organization or strategy to match.

Effectively, Clinton just launched her campaign, and it wasn’t what anyone was dreaming about.

On the specifics of Clinton’s defense: her initial plea of “convenience” felt lame, and the complaint that “I didn’t want to carry two devices” was quickly and widely mocked. The news that she deleted many of her private emails, after deciding what to turn over the State Department, also fanned flames of suspicion, certainly among her detractors and maybe even among neutral observers (if such a species exists).

In the end, her most effective explanation was the simplest: Even when public officials have an official government email account, we trust them to decide what are “personal” matters that don’t merit public scrutiny, and belong in their private email account. So demands that she turn over all of her personal email, or even the Clinton server, to some independent arbiter, now that questions have arisen, are comparable to demanding that Secretary of State John Kerry – or Sen. Ted Cruz, for that matter -- turn over his private email communications so an outside person can decide whether any of it is of public interest.

Clinton clearly believes people will relate to her ultimate defense: that she deserves some privacy when it comes to planning Chelsea’s wedding, her mother’s memorial or sharing her now-intriguing yoga routine. “No one wants their personal emails made public. Most people understand that and respect that privacy,” she told the gathered throng.

All of that makes sense. Yet from the beginning, the Clinton operation has been behind on this story, from its inadequate defense in the initial New York Times piece, which alleged she “may have” broken an unnamed law, to the planning of the press conference Tuesday. The disarray was symbolized by press aide Nick Merrill starting out as the one responsible for choosing questioners, then surrendering the job to Clinton; for a while no one seemed empowered to call on a reporter. Surreally, the 20-minute episode ended with a question from al-Jazeera’s David Shuster, a longtime Clinton antagonist from their Little Rock days.

By all accounts, Clinton’s audience for the air-clearing wasn’t the media, and it certainly wasn’t Republicans. Voters haven’t even tuned in. The target was anxious Democrats, given voice by Sen. Dianne Feinstein, who called on Clinton to offer a fuller explanation on Sunday. (For the record, Feinstein says she’s satisfied.) But the likely 2016 candidate also has to reassure people that she won’t repeat the mistakes of her 2008 campaign, including its mutual hostility with the media, and Tuesday’s press conference probably didn’t do that.

She needs an actual campaign. Clinton has been in woefully short supply of surrogates; I saw stalwart Ed Rendell, the former governor of Pennsylvania and a top 2008 defender, agree that Clinton probably needed to turn over her email server on MSNBC; nobody in Clintonland can be happy about that. But that’s a sign that there’s no official operation; if there were, Rendell surely would have had better talking points. Right now the campaign is a vast, formless enterprise, a rumor of sorts. It needs structure and leadership, asap.

The Clintons clearly believe they are subjected to a double standard – and indeed, reporters don’t seem to be tracking the email practices of other 2016 contenders, besides giving former Florida Gov. Jeb Bush credit for making his email public, even though much remains unavailable to scrutiny. Most of the coverage has centered not on what Clinton allegedly did wrong, but on the way the email story feeds the “narrative” – of the Clintons being shady, of thinking rules don’t apply to them – which is a narrative the media, of course, creates and largely controls. The Clintons and their defenders think hostile reporters repeatedly gin up phony scandals – and then judge Clinton by how she responds to them.

There’s an element of truth in that, and yet it’s the way our world works. That’s what she’s taking on when she runs for president; she better get used to it.

But we – speaking for anxious Democrats – better get used to the fact that none of that is likely to change a whole lot, no matter how masterfully she runs her campaign. (The no-drama Obama folks who've gone to work for the campaign may find their job is much tougher when subjected to the Clinton rules.) The candidate will never be able to hide her distrust for most of the media. It will be up to voters to decide if they care.