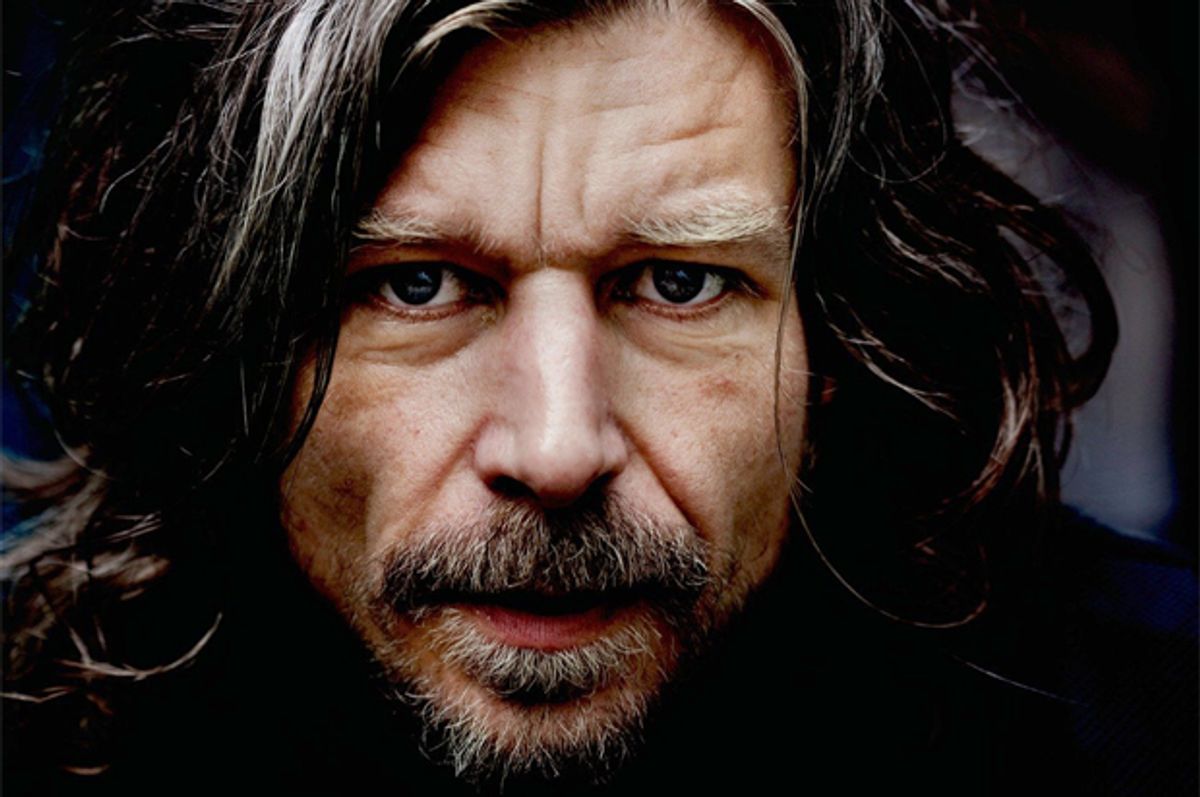 If there’s one thing we learned from part one of Karl Ove Knausgaard’s Tocquevillian road trip for the New York Times Magazine, it’s that North America is a stressful place. After dealing with clogged toilets, the diabolical voice on his GPS, and the terrifying encounter with fat people, Knausgaard continues his aneurysm-inducing journey through the midwest in Part Two, encountering lots of things that flummox and disturb his delicate Norwegian sensibilities. Like:

Target:
When Peter needs to purchase some shoelaces, the pair stop at target, which gives Knausgaard his first experience of an American Big Box Store (think the scene in the "Hurt Locker" where Jeremy Renner stares, paralyzed, in front of an aisle of cereal boxes): “The store, a Target, was like a great hall, the ceiling had to be at least 50 feet high, and the various sections offering all kinds of merchandise went on for what seemed like a full city block. It seemed almost obscene to buy something so trifling as shoelaces in this gigantic box. None of this would have been here, I thought. Not the mall, not the parking lot, not the cars. Another culture with another future would have defined the continent.”

Finding a place to smoke:
Knausgaard spends a considerable amount of time worrying about how, when and where he can smoke in America. The rental car he shares with photographer Peter van Agtmael presents unique challenges. “The worst part was getting rid of the butt. If I just held it over the edge of the open window and let go, it could just as easily blow back into the car. This happened several times, with the butt typically flying onto my trousers or the creases of my jacket, forcing me to hunt frantically for it before it set fire to something.”

American bars:
American bars are another source for concern, with their preponderance of unnecessary visual stimuli: “Around us, people laughed and talked. A TV hung on every wall, each with different images flitting soundlessly across its screen. Nearly every place we went had TVs on the walls, and they were always on. I never saw anyone actually watching them, beyond an occasional glance up at the screen. Why were they there?”

And their frivolous games: "After the fourth round of beer and whiskey, we started playing darts. Peter explained that I had to throw the darts in an arc, up a little first, aim over the target. If there is one thing I can’t stand, one thing I really loathe, it’s when people tell me what to do."

Hotel showers:
After flooding a bathroom in Newfoundland, North American plumbing continues to confound and delight: “The shower enclosure was of the same mysterious origin as the one I saw in Newfoundland, with the wall and tub cast in one mold and no joint to explain how it had gotten into the room.”

Google:
One of the things Knausgaard must do while in Minnesota is visit his Norwegian cousins, which involves some light Googling. They do have the internet in Norway, as far as we know, but Knausgaard runs into some uniquely American concerns in the process.

I typed in “Mark Hatloy” and hit enter.
The website began suggesting documents at a furious pace, the screen filled up with green columns, new resources with new data, and each time one was completed, another sprang up.
It didn’t feel good.
His life was none of my business.
On the other hand, all this must be publicly accessible information in the U.S.

Cars:
As we know from part one, in which he shows up to rent a car without a drivers license, Knausgaard doesn’t have much of a way with vehicles. After expressing his reservations about driving an automatic car, he finally asks Peter to take a turn behind the wheel -- which proved to be a challenge, the car "leap[ing] “backward as I reversed it without the restraining influence of a clutch." The inside of the car proves just as flummoxing:

“Try moving the seat forward?”
“How do I do that?”
“You push that button there.”
“Which button? That one?”
I pushed the button, but all that happened was that the back of the seat inclined slowly forward.
“This is, without a doubt, the most exciting thing that has happened so far on this trip,” Peter said.

Religious art:
After encountering a Jesus and some dinosaur statues, Knausgaard enters a lengthy diatribe on the failings of religious depictions in American visual art in comparison with more advanced Russian renderings. Of the Jesus statue: "All his limbs were out of proportion, and his face was so crudely made that the statue seemed the embodiment of a child’s drawing."

Talking to Americans:
Much of part one surrounds his concern that he should actually have to talk to the people of the country he is writing about. This remains a concern. “I looked for a cafe or a diner, because I wanted to experience something American, and figured I should just get it over with, find some Americans and actually talk to them.”

Having talked to Americans:
When he finally does manage to actually talk to some of the people he came to talk to, it’s just as horrible as he imagined: “When I woke up the next morning, I had an anxiety attack.… Everything was terrible, everything was diseased and I was a ridiculous, laughable character. Oh, God, what an idiot I was. I had talked. To total strangers, I had babbled away. With no dignity whatsoever, happy and enthusiastic over every little thing. I had given compliments! My eyes had filled up with tears at my own human warmth and goodness. Oh, Jesus, was I an idiot.”