"Spare me the diversity seminars": A sampling of Tom Cotton's college columns

From what women want to the follies of libertarianism, a look at the future senator's writings 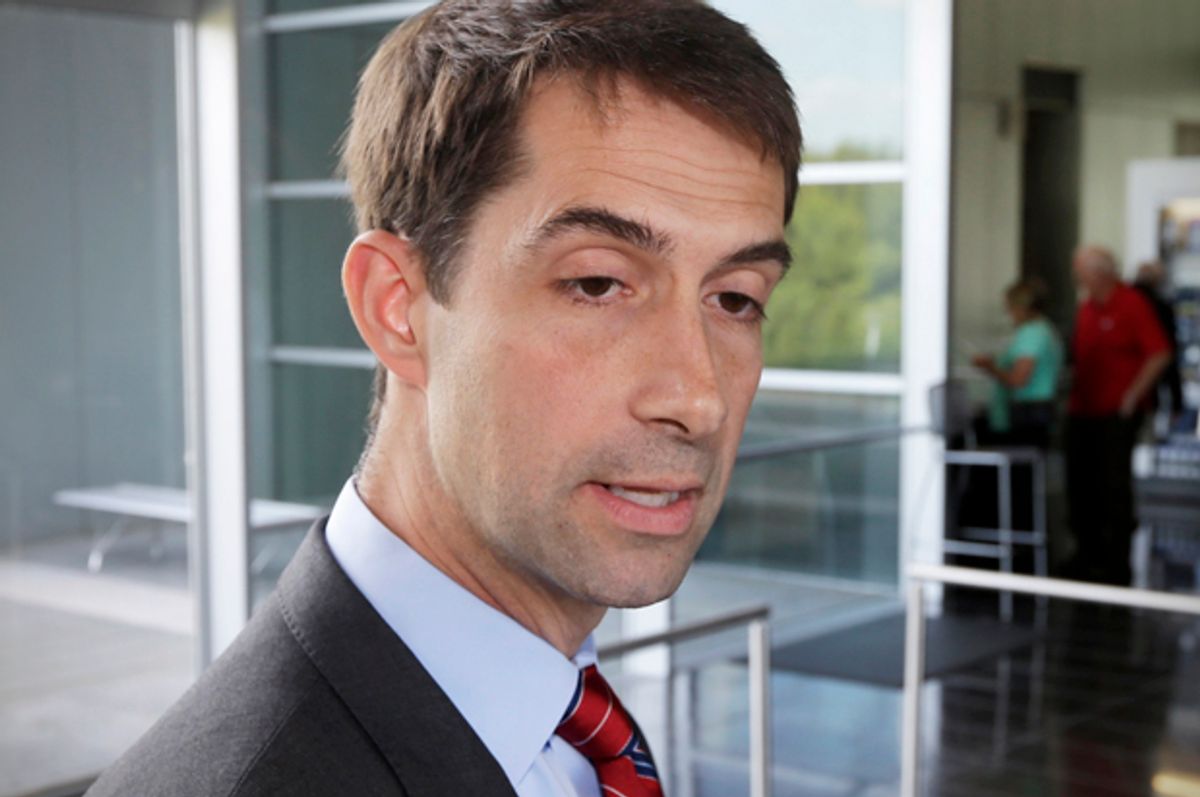 Before he made waves as a neoconservative senator intent on torpedoing diplomacy with Iran, and well before he kindled flames of speculation about a future presidential run, Tom Cotton was a semi-weekly columnist for the Harvard Crimson, the hallowed daily that has fostered such varied talents as Steve Ballmer, Daniel Ellsberg, Linda Greenhouse and Franklin Delano Roosevelt. Writing for the Crimson from 1996 until 1999, the budding conservative mind mused on topics ranging from the purpose of a liberal education to the evils of no-fault divorce, staking out often self-consciously contrarian positions and often expressing contempt for diversity, political activists on campus, and the changing mores of a society in which old systems of patriarchy and homophobia encountered mounting resistance.

A sprinkling of his columns -- including one in which he conveys decidedly antiquated notions about women and another in which he offers warm words for Bill Clinton (his estimation of the 42nd president would rapidly become much more grim) -- received media attention during his successful 2014 campaign against then-Sen. Mark Pryor, D-Ark. With Cotton attaining newfound notoriety as the senator leading the latest effort to sabotage the Iranian nuclear negotiations, Salon decided to revisit his writings -- the better to get a sense of a man whose highest ambition is probably not to represent the upstanding people of the great state of Arkansas.

Early in his Crimson tenure, Cotton did not evince the hard-edged conservatism that came to define his later columns (and his political career). Shortly before the 1996 election pitting Clinton against Bob Dole, Cotton penned a rather fawning column, expressing awe at Clinton's political skills and his character. Though he neither advocated nor criticized any Clinton administration policies, he vouched for Clinton's good faith, rejecting the characterization of the president as a "pure, disingenuous politician." Instead, Cotton argued, "Bill Clinton is the most successful campaigner of our time because he is the most sincere campaigner of our time," with a "sincerity and empathy" borne of his hardscrabble upbringing. Just over a year later, however, Cotton vociferously denounced Clinton during l'affaire Lewinsky, inveighing against the "compulsive womanizer and liar" residing at the White House.

An early sense of Cotton's political outlook arrived in the form of a March 1997 column on the follies of libertarianism. Notably, Cotton did not come at the matter from a clear conservative or liberal perspective, but he did emphasize the centrality of community, which he accused libertarians of foolishly dismissing out of hand. Blasting the self-importance of rugged individualists convinced that their success was the product not of privilege but of extraordinary personal characteristics, Cotton put it better than even a pinkish Salon writer could:

There are many reasons to be a libertarian. One is vanity. It is nice to think that you are responsible for all the good fortune and success you achieve. Another is naivete, for you are surely naive if you believe the immediately preceding proposition. Still another reason is selfishness: since you are fortunate and successful, you are likely to want to hoard that fortune and success. Each of these reason, and others, point to the central fact of libertarianism, which is that practically all of its adherents belong to a self-regarding and sanctimonious elite. Little surprise, then, that it is popular at Harvard.

Mindful as Cotton was of the importance of community, he showed no enthusiasm for efforts to better integrate racial, ethnic and other minorities into it. Fulminating against intellectuals who "worship at the cult of 'diversity,'" Cotton wrote in March 1998 that affirmative action programs showed a commitment "only to specious diversity." Citing test score data from the University of Texas, which showed a higher median LSAT score for admitted white law students than for admitted African-American ones, Cotton seemed to give little thought to the question of whether racial minorities might offer unique insights and contributions to the student body and the legal profession -- attributes that an LSAT score can't capture.

That same year, in the context of a student campaign for the rights of migrant laborers, Cotton criticized those who failed to choose "education over activism," not pausing to ponder the possibility that the two can coexist in dialogue with one another. In a particularly bizarre aside, he also expressed his puzzlement that the LGBT student group and the Ballet Folkorico de Aztlan were supporting the labor rights effort: "[B]ut hey, why exclude people from the party?" Why indeed.

Particularly cringeworthy -- right from the lede, which began, "Men are simple creatures. It doesn't take much to please us" -- is Cotton's October 1997 column on what women really want. Anecdotally -- based on conversations with a small sample of Harvard women -- Cotton concluded that women's "greatest fear in life" is being left by their husbands. Taking this as the gospel truth, Cotton advocated reform of no-fault divorce laws, lauding a law written by then-Louisiana state Rep. Tony Perkins (now president of the right-wing Family Research Council) providing for "covenant marriages," whereby spouses could only divorce if there was fault. Such innovative approaches, along with the patriarchal prescriptions of groups like the conservative Promise Keepers organization, would allow women to fulfill their "deepest hopes." As for those women whose deepest hopes consist of escaping loveless marriages or reclaiming personal autonomy: tough luck, apparently.

While Cotton at least offered a condescending and misguided approach to address what he believed to be women's chief concerns, he was not particularly interested in those of Harvard's LGBT community. After vandals defaced Dunster House in April 1997 -- with homophobic epithets like "FAGGOT!" and "FAG" and "PUSSY!" written on the building -- many on campus sought a dialogue on the animus experienced by LGBT students. Not Cotton. To his mind, spraying "FAGGOT!" on the exterior of a residence hall constituted a simple property crime, nothing more; there were no larger conversations to be conducted.

"Spare me the diversity seminars and the consciousness-raising seminars," Cotton wrote. "Just take care of the criminals."

For his final undergraduate column -- written in May 1998, just before he matriculated to Harvard Law -- Cotton reflected upon what he acknowledged was his often "contrarian" stance toward the rest of the campus -- and he displayed no small amount of self-regard in doing so:

Only last weekend I was characterized (good-naturedly) as someone who would like to have lived a century or two ago. I suppose that comports with my acknowledged contrarian sympathies, though it is not simply correct. I probably appreciate the alien world revealed in Plato's dialogues and Jane Austen's novels more than most others do. But it is because of this appreciation, not in spite of it, that I also probably appreciate our world and the possibilities of it more than most other do.

"I also probably appreciate our world and the possibilities of it more than most other do." It might be challenging to fit that onto a Cotton 2020 bumper sticker, but it's worth a try.