Thomas Piketty slams Jeb Bush on education and inequality: "I think there's a lot of hypocrisy"

Economist dings Bush and other Republicans for empty rhetoric about inequality 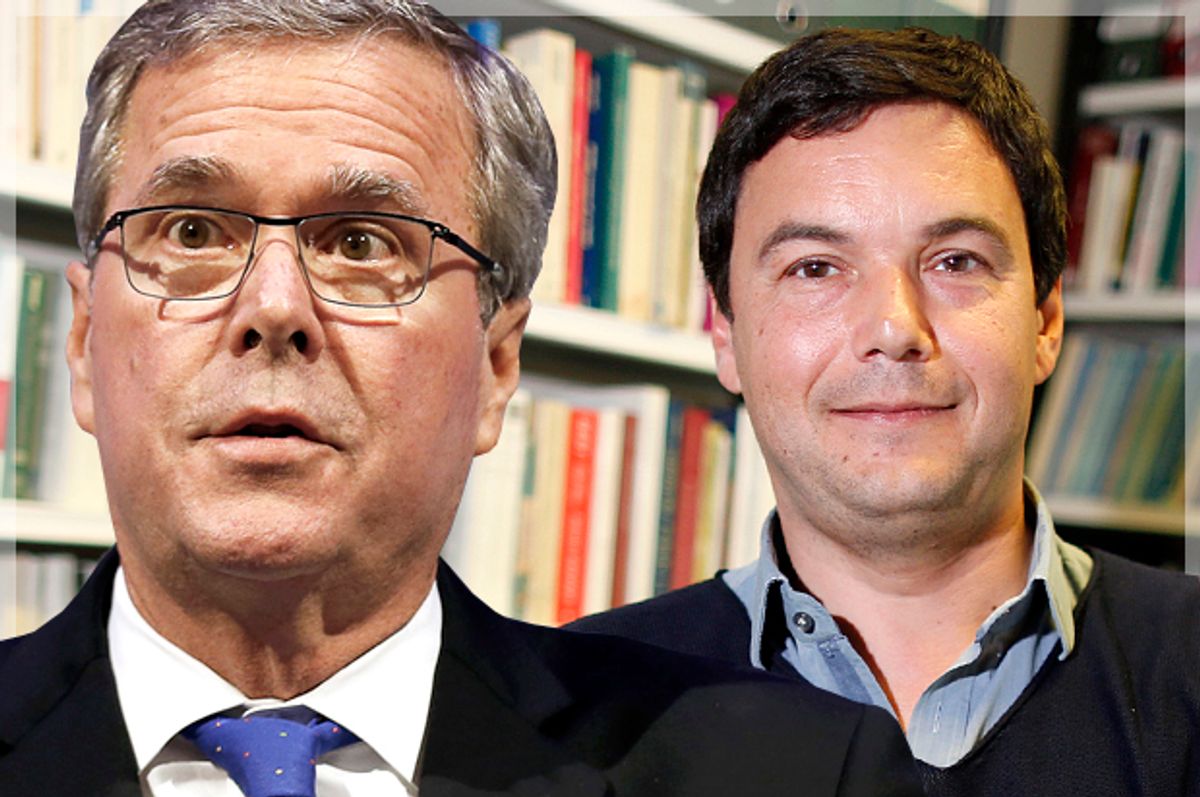 Data-driven tomes by academic economists rarely spark a popular sensation, but that's precisely what the French economist Thomas Piketty achieved last year with the publication of "Capital in the Twenty-First Century," which traced the growth of economic inequality in the U.S. and Europe over the past four centuries. But Piketty's book was more than a work of economic history: It captured the present political moment, a moment increasingly defined by citizens' anxieties about the gap between rich and poor. Inequality has so galvanized voters that even Republican presidential candidates like Jeb Bush now decry it, bemoaning the uneven benefits of the economic recovery and lamenting stagnant wages for lower and middle class Americans.

But Piketty is decidedly unimpressed with what he considers Bush and other Republicans' empty rhetoric. In an interview with MSNBC's Krystal Ball -- set to post online later today -- Piketty describes Bush's approach to the issue as woefully inadequate, criticizing his education proposals and arguing that "there's a lot of hypocrisy" in the rhetoric of conservatives who condemn inequality while failing to support policies like an increased minimum wage and ramped-up infrastructure spending.

"You're saying let's tax the top and invest that money into education for all. [Jeb Bush] is a proponent of school choice, of giving schools vouchers so they can attend public school or private school, whatever they want. Is this a good solution in terms of dealing with what he calls the opportunity gap?" Ball asks Piketty.

"From what I can see, he doesn't want to invest more resources into education. He just wants more competition... there's limited evidence that this is working. And I think most of all what we need is to put more public resources in the education system. Again, if you look at the kind of school, high school, community college that middle social groups in America have access to, this has nothing to do with the very top schools and universities that some other groups have access to," Piketty replies.

What's needed, Piketty continues, is an emphasis on the lower economic strata.

Asked about claims by Bush and other conservatives that a so-called "skills gap" is responsible for the growth in inequality, Piketty dings that narrative as simplistic.

Education is important, Piketty acknowledges, but education alone is not enough to ameliorate inequality.

"You need wage policy and you need education policy," he says. "And in order to have adequate education policy, you also need a proper tax policy so that you have the proper public resources to invest in these public services. Also you need infrastructure. Many of the public infrastructure in this country are not at the level of what the very developed should have. You cannot say, like many of the Republicans are saying, we can keep cutting tax on these top income groups who have already benefitted a lot from growth and globalization over the past 30 years."

Conservatives' proposals, Piketty concludes, are fundamentally at odds with the goal of creating a more egalitarian society.

Watch the full interview below, via MSNBC: