We're all genre readers now: Can we finally stop the tired "pixies and dragons" vs. literary fiction wars? 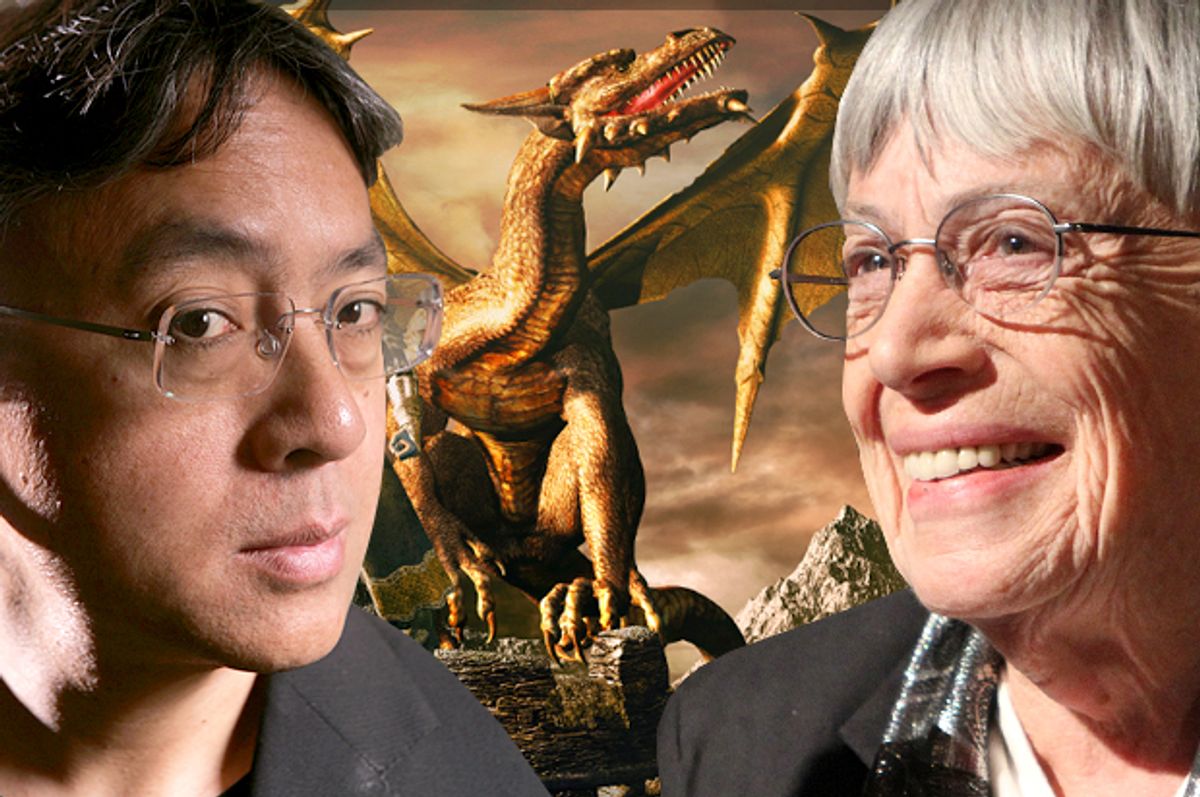 From the moment  a profile of him  appeared in the New York Times late last month, it was obvious Kazuo Ishiguro was going to be getting grief. “Will readers follow me into this?” the British novelist said of “The Buried Giant,"  his new book set in Britain during the Dark Ages, when dragons and ogres were regarded by the populace as simple facts of life. “Will they understand what I’m trying to do, or will they be prejudiced against the surface elements? Are they going to say this is fantasy?”

It was only a matter of time before someone in the fantasy/science-fiction world would take very public offense at these remarks, especially since Ishiguro didn’t go on to issue a neon-lit, marquee-size disclaimer stating that he sees nothing wrong with fantasy. There is no one more tetchy than a genre reader who suspects his or her favorite books are being denigrated — even when they’re not.

This time out, SF/fantasy doyenne Ursula K. Le Guin did the honors. “Well, yes, they probably will,” she retorted in a blog post about the likelihood readers who might take “The Buried Giant” for a fantasy. “Why not? It appears that the author takes the word for an insult. To me that is so insulting, it reflects such thoughtless prejudice.”

With all due respect — and she’s due a metric ton of respect in my book — Le Guin is in the wrong here. Ishiguro quite accurately perceived that some readers might be confused or even put off by the fantastical elements of “The Buried Giant,” even if he doesn’t hold those prejudices himself. One of the most prominent of those readers was New York Times critic Michiko Kakutani, who panned the novel, likened it to “Game of Thrones,” “The Wizard of Oz” and “The Lord of the Rings,” although in truth it has next to nothing in common with those books in either its narrative format or style.

As another of the novel’s reviewers, I disagreed with both Le Guin and Kakutani; “The Buried Giant” is not, in fact, a fantasy novel. Like Ishiguro, I intend no knock on fantasy by making this distinction. It’s a genre I love, and the subject of my own book. Yet, just as people who dislike reading about ogres and wizards may turn up their noses at “The Buried Giant,” readers who love Tolkien, George R.R. Martin or Le Guin are likely to be disappointed with it, as well, especially if they expect a similar experience. Le Guin was one of them. She complained of “The Buried Giant” that “a fantastic setting requires vivid and specific description; while characters may lose touch with their reality, the storyteller can’t. A toneless, inexact language is incapable of creating landscape, meaningful relationship, or credible event.”

Longtime Ishiguro readers will recognize that “toneless, inexact language” could describe much of his work. From “The Remains of the Day” to “Never Let Me Go,” his fiction conveys an image of the world through the limited perspective of people who don’t understand, or who refuse to see, crucial aspects of their lives and environments. The reader views the story through this pinhole aperture, gradually acquiring a different picture. But the resonant emotional effect of Ishiguro’s fiction comes from the reader’s understanding of the tragic interplay between the aperture and the world on the other side of it — and, ultimately, every human being’s hobbled grasp of our true condition.

Granted, Le Guin is correct that most writers can’t get away with using banality to attain profundity, but Ishiguro can, and has proven as much in his earlier work. Whether he pulls it off again in “The Buried Giant” is debatable; it’s a perplexing and rather disorienting book, although certainly of particular interest to readers fascinated by the broader spectrum of literary genres. Ishiguro has listed the 14th-century chivalric romance “Sir Gawain and the Green Knight” as one of his primary inspirations.

The trouble is, few contemporary readers take a long view of literary genre. All of the books we label “genre fiction” today are novels or short stories, essentially modern fictional forms. In that sense, George R.R. Martin’s novels, for all their magic and dragons, have more in common with John Updike’s realistic fiction than they do with “Sir Gawain and the Green Knight.” A chivalric romance like “Sir Gawain,” besides being written in verse instead of prose, has a different conception of character, different narrative strategies and makes different uses of figurative devices than the novel. It’s the expression of a culture, the Middle Ages, with a fundamentally different concept of the universe, society, stories and the self. (I highly recommend C.S. Lewis’ short and very readable treatise “The Discarded Image: An Introduction to Medieval and Renaissance Literature” to those who want to learn more about the distinctions.)

Now that the novel has swallowed and digested nearly all of the literary genres that preceded it, the term “genre” serves as a marketing rubric under which we group related novels. What connects them is, typically, motifs. Science fiction usually features advanced technology or a futuristic setting. Crime fiction has murders, detectives and clues. Fantasy has dragons and wizards or other supernatural elements from myth and folklore, or simply posits a world in which magic is real.

Still, motifs are not the same thing as form, and all of these books are recognizably novels, an essentially modern genre, even if “the novel” is fiendishly hard to define. Jane Smiley’s excellent “Thirteen Ways of Looking at the Novel” proposes that the novel is a long prose narrative that has a protagonist, or central character, although there are now novels in verse, ensemble novels and novellas that dance on the line between the short story and its bigger relative. Nevertheless, Smiley’s formulation is good, and the works that conform to it tend to share, as well, qualities that are harder to nail down, such as an effort to create and explore plausible human psychology in the main characters and a series of events that constitute a shaped plot.

Le Guin herself acknowledges in her blog post that motifs alone do not a genre novel make. “No writer can successfully use the ‘surface elements’ of a literary genre — far less its profound capacities — for a serious purpose, while despising it to the point of fearing identification with it,” she writes. Yet she also seems to be arguing that by deploying fantasy motifs, Ishiguro has written a fantasy novel whether he admits it or not; he just hasn’t written a good one.

By all indications, however, Ishiguro wasn’t trying to write a fantasy novel in the first place; at times he seems to be trying not to write a novel at all. “The Buried Giant” elbows and shoves at the skin of the form by seeking different ways to incorporate pre-modern storytelling techniques. At the same time, the book’s main themes — an elderly couple slowly coming to terms with the imminent death of one partner and a society’s willful amnesia about its immediate political past — could not be more contemporary and novelistic, as well as relatively rare in the modern fantasy genre. It makes perfect sense for the author to say “The Buried Giant,” despite employing some of the motifs associated with fantasy, is not really a fantasy novel and will probably frustrate readers who want one. And it’s fully possible to say so without implying that there’s something inferior about fantasy.

Le Guin is 85, and part of a generation of science fiction and fantasy authors for whom a genre label meant a real and often hurtful diminution of earnings and prestige. So her hair-trigger willingness to perceive a slight to her genre in Ishiguro’s remarks is understandable. However, as Galadriel observes in her voice-over at the beginning of Peter Jackson’s “Fellowship of the Ring” film, the world has changed.

Fantasy, science fiction and crime fiction are not just the ascendant genres of popular culture; their motifs and devices have become commonplace in literary fiction, even as the best genre writers have increasingly won literary acclaim. Pulitzer winners Philip Roth and Michael Chabon have written alternate histories (a science fiction subgenre); Helen Oyeyemi’s celebrated novels are infused with fairy tales, Stephen King’s time-travel doorstop “11/22/63” made the New York Times Book Review’s 10-best list in 2011; Emma Donoghue’s “Room” is a crime thriller. Literary star David Mitchell claims Le Guin herself as a formative influence. And practically every other literary novel these days, from the decidedly experimental to the practically commercial, is either a dystopian apocalyptic tale or a murder mystery.

Nevertheless, even a perfectly inoffensive review of a book like “The Buried Giant” — take Mark O’Connell’s excellent one in Slate — will predictably collect a string of belligerent comments from readers who simply presume, on no evidence, that the critic is dismissive of genre fiction. Another frequent crotchet is to protest that one’s preferred genre is not formulaic, then bitterly complain that a literary writer (even one who says she’s not trying to write in the genre) is not properly following the genre’s rules. That’s doing Groucho Marx one better: bemoaning that someone doesn’t want to be in your club then proclaiming that if she did you wouldn’t let her in. Another tired routine involves accusing outsiders of making unfounded, stereotypical assertions about genre fiction, then turning around and mouthing manifestly uninformed generalizations about literary fiction.

I’ve heard some observers kick around the theory that, as the the boundaries between literary and genre fiction become ever more blurry, people who identify as longtime — and long-suffering — genre fans feel threatened. That might be because there’s a certain cultural or moral cachet in portraying oneself as a wronged outsider or because a shared feeling of exclusion can bind a group of people together. An influx of new readers with different standards about what constitutes a good book promises to change the familiar landscape. What if they don’t care about thorough world-building or applying scientific rigor in imagining future technologies or whether the killer is ever identified, or any of the other rules you’ve laid down? What if they demand other things instead, and writers and publishers heed them?

If this is true, then perhaps what really bothers the chorus that predictably turns out to gripe that their genre has been stigmatized is in fact the increasing erosion of that stigma. When Ishiguro says, “I think genre rules should be porous, if not nonexistent,” he is calling for the liberation of artists and their audiences, but he is also indirectly calling for the dissolution of a comforting, if also parochial, identity. From that perspective, it might be far more reassuring to comb the press for confirmation that the “literary establishment” still looks down on your genre and wants nothing to do with it.

Sure, some people will never want to read about elves — just as some of us are predisposed to be uninterested in fictional cowboys or gentle coming-of-age stories set in rural New England — but most literary readers and critics are omnivorous in their tastes. They are happy to read non-realist fiction as long as it also offers the qualities that matter most to them: beautiful prose, an interesting narrative voice, authentic characters and relationships, adventurous formal choices. The best genre readers and writers I know are very much the same, and when I catch up with them are as likely to be praising, say, Edward St. Aubyn and John Cheever as Neal Stephenson or Tana French. We’re all genre readers now. Get used to it.