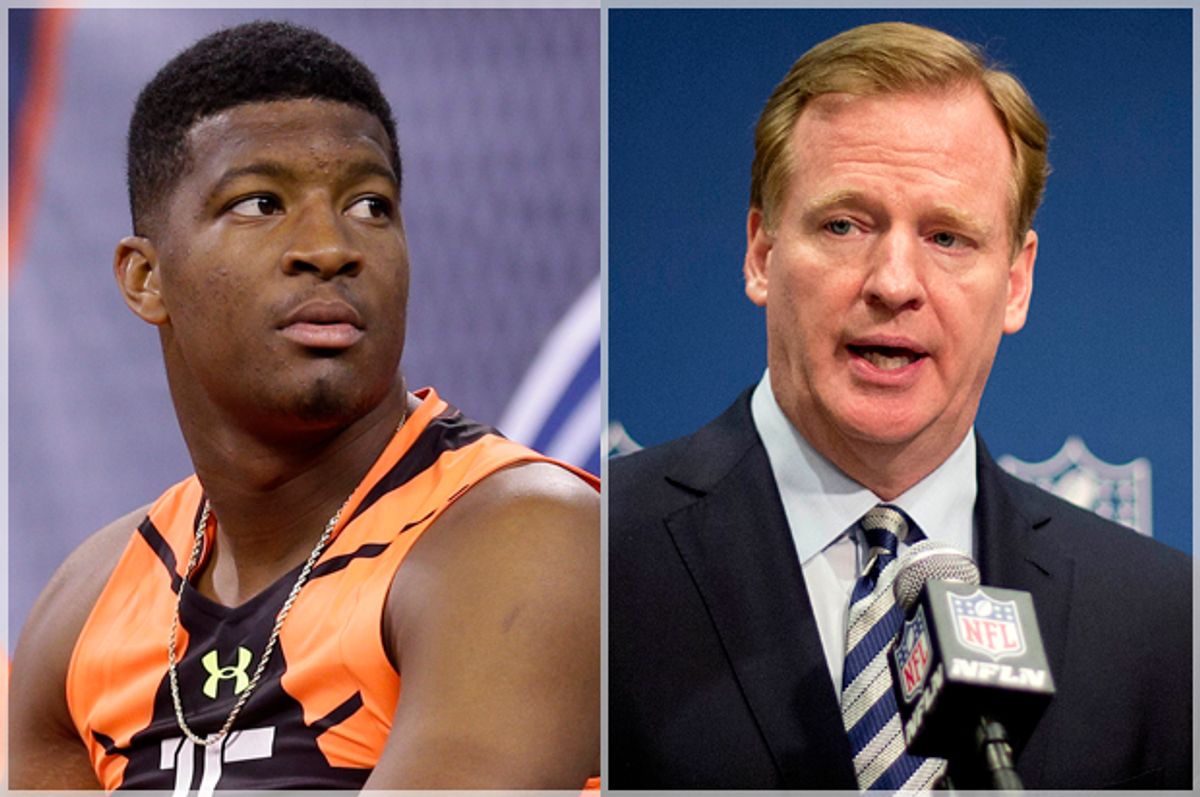 Reports surfaced Wednesday that Jameis Winston, the former Florida State quarterback and Heisman Trophy winner who is expected to be the No. 1 pick in the NFL’s April draft, met last week with league commissioner Roger Goodell. The point of the meeting was, according to oneof Winston's agents, to “tell his own story." That story, of course, is at least in part about allegations that Winston raped a fellow classmate in 2012.

As Peter King reported over at MMQB, Winston had requested the meeting back in January and Goodell agreed to it in February:

One of Winston’s agents, Greg Genske, told me Tuesday that once Winston declared for the draft he wanted to meet with Goodell, both to tell his own story and to get the lay of the land about his future in the league. Sometime in February, Goodell agreed to meet Winston. That meeting occurred last week. As Genske said, it was more of an informational/educational meeting than anything else—though Winston did get his chance to tell his story to Goodell.

“He went out of his way to make a good impression, and to show that he understood what was going to be expected of him in the NFL,” one league executive who participated in one of the series of meetings said Tuesday night.

Winston, of course, had several off-field issues at Florida State [...] But the league people I spoke with Tuesday made it clear that Winston made a smart decision in pushing to meet Goodell and establishing a relationship with him.

Winston was never charged, but the allegations have continued to follow him as more troubling details emerged over the last two years. A scathing report published last year in the New York Times revealed the extent to which Florida State and the Tallahassee Police Department compromised the investigation, and a Title IX lawsuit filed after the alleged rape has likewise kept the public's eye turned toward Winston.

But another recent development, and perhaps the reason Winston requested the meeting in January, is that the woman who alleges she was raped by Winston recently went public. Erica Kinsman was interviewed under her own name in the film “The Hunting Ground," a documentary that was previewed at Sundance in January and has since been released nationwide.

In the film, Kinsman recounted the night of the alleged rape and her subsequent treatment by Florida State and local police after she reported the incident. She said that she was told by the detective investigating the alleged rape that Tallahassee was a "big football town" and that her life would be "made miserable" if she went forward with her case. She detailed the harassment she said she faced while Winston remained a beloved figure on campus. In short, she described a culture at Florida State that sounds very much like the culture of the NFL.

The details of the alleged rape and the investigation are damning, but haven’t done much to hurt Winston's reputation as a once-in-a-lifetime talent and coveted NFL pick. The meeting with Goodell was likely Winston’s attempt (or Winston’s handlers' attempts) to get ahead of the story, to make his own case as Kinsman went public. It was a smart calculation, particularly with the NFL -- and Goodell -- as an audience. The meeting allowed both men to get precisely what they want.

For Winston, it was an opportunity to appear repentant. Not for allegedly raping someone, but for making “bad choices." He can tell Goodell what he’s “learned” from the experience. Make it clear that he knows that the NFL must have concerns, and that he will be working very hard to show the league that he is a man of good character, who doesn’t want to be, in the league's favored parlance, a distraction. For Goodell, it’s an opportunity to play moral authority and ultimate judge of character, a role he’s relished in the last year as the league has flailed in its efforts to address its problem with intimate partner violence and sexual assault.

It’s a win-win situation -- at least for Winston and the NFL. Winston gets to seem humbled and ready to make a fresh start, and Goodell gets to talk tough about "what's expected" of Winston once he signs with a team. But as the league prepares to embrace another man with an alleged history of sexual violence while doing virtually nothing in the way of creating transparent systems of accountability, women are on the losing end, once again. When it comes to the NFL and violence against women, there is nothing that a little preemptive damage control and press savvy can't fix. The optics -- and Goodell's bottom line -- matter most. The Goodell-Winston summit is just the latest reminder of this sad fact.