Alia Shawkat on her hot "Broad City" doppelgänger romance: "It was one of the best makeout scenes that I’ve had"

The "Arrested Development" alum guest starred last night on one of the show's funniest, kinkiest episodes yet 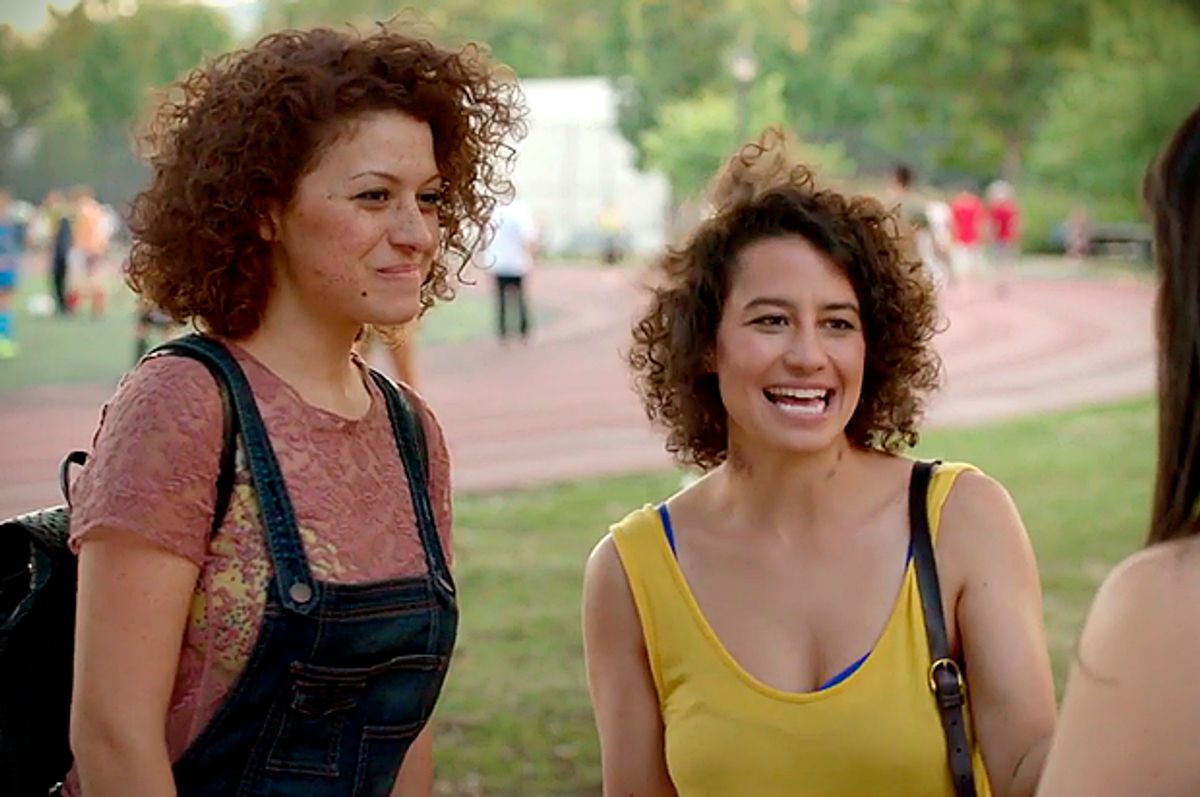 Ilana Glazer and Alia Shawkat look alike. In fact, after she first met Ilana in an improv class, "Broad City" co-creator and co-star Abbi Jacobson mistook her for the "Arrested Development" star (and thought it was weird how bad she was at improv). This likeness is the central premise of last night's hilarious "Broad City" episode, in which Ilana and Shawkat's character embark on a romance, in spite of -- or perhaps, because of -- their physical resemblance to one another. We caught up with the charmingly candid "Arrested Development" alum and prolific indie film actress during her lunch break (and her bathroom break) from a "Funny or Die" video shoot to talk about making out with Ilana Glazer, her love of "Broad City" and why she chooses to take on queer roles.

That was one of my favorite “Broad City” episodes, probably ever. How did the whole idea to have you on come about?

I started watching the show after the first season had aired and became a huge fan of it. I thought it was hilarious and I really liked the girls. I would get mistaken for Ilana all the time and it was before I’d seen it so I was like, “What the fuck? Who is this person?” Then when I saw it, all my friends would be like, “You guys look alike.” So I emailed my manager and was like, “We look so much alike and I love the show, maybe we can do something with that?” And she put me in touch with them and I started texting the girls and they were already in the process of writing something. It wasn’t like, simultaneously, but they started working on an idea and they gave me some notes about it. They said like, “Blue Is the Warmest Color-esque.” I thought it was hilarious and we were on a group text for a while, sending each other weird photos. A little bit later it was written, it was hilarious, and then I went to New York and shot it.

What sort of weird photos?

Were you involved in coming up with the “Blue Is the Warmest Color-esque” plot aspects?

They had already started writing it when they contacted me. So I was into it. She was like, “Are you cool with hooking up? Like a lot of hooking up?” And I was like, “The more the better.” So that happened.

What was it like shooting the makeout scenes with Ilana?

It was one of the best makeout scenes that I’ve had, in real life and on camera. It was great. Kissing girls is nice because girls don’t get weird before, not that all guys do but it’s usually a thing. We were just giggling each time and we didn’t get awkward or shy. It was really fun, she’s a great kisser.

Did you guys have any makeout prep re: lip-balm, gum? Any tips?

We were both jokingly taking mints. We were always fucking with each other but when we kissed we kept it fresh for the first time, didn’t want to lose that spontaneity.

I found that to be true in the first season but even more so in the second season just as you get to know the characters better. I love the way that they’re just playful with their sexuality in general and it’s not like, “They talk just like guys do.” It’s like, no, this is how girls talk about sex. So I like that, I think the writing is really smart. And those two in general are just so creative and funny and supportive of each other, I think that comes across so well. I really love it, I think it’s really honest portrayals of the brilliant imaginations of two young girls. It comes across really strongly.

This is probably one of the show's most explicitly sexual episodes yet. Did you guys set out to push boundaries?

I had seen the show the first season but I read the script and just loved it; I didn’t really put it in comparison to the other ones. I was game for it, there was a point where there was this stand-in where we have to do in-between-the-legs shots and the girl was freshly shaven and even had perfume on down there, which was interesting. I was like, “This is new for me,” but I don’t think we were consciously like, “Let’s make this something more.” But it was fun. I think that there is a raunchiness in their humor but it never gets too explicit, in my opinion. I think it’s always used for the sense of comedy.

With “May in the Summer” and “Wild Canaries,” you’ve played a lot of roles that emphasized queer sexuality. What is it that attracts you to these sorts of projects?

I hope -- if you hear peeing it's cause I'm peeing, I'm sorry -- I am attracted to honest characters, I guess, and good writing. There’s been definitely some roles where I’ve played lesbians or more direct sexual girls. I think it’s a mix of how you carry yourself and whether someone thinks you’re right for the role. I don’t think I come off as gay or straight or anything else in between; I think it’s just I’m a direct person with that stuff, I’m very open with my sexuality in general in my personal life. I think it’s important for characters in films, or at least the characters I’m drawn to, to be not confused about that kind of stuff because we send out so many different messages, especially with young women, of blame. Like, “Cinderella” is on fucking billboards all over the world. It’s like, “What the hell? She’s a size 00 and she’s waiting for a prince to show up.” I think the princess ideal is very dangerous for young girls and even the character in “Twilight,” the thing about being consumed by a guy. It’s very important for women to be like, “No, I have to learn how to come first before I start worrying about who I’m going to marry.” I think that’s changing but it’s still moving very slowly. On the one hand you have something like “Broad City,” which feels like the complete evolution of that, but then on the other hand you still have TV shows like “The Bachelor,” so it’s a bit of a mix and I think it’s important to keep a balance for change.

Do you personally identify with the life the girls have on “Broad City”?

Yeah, I think everyone is different. I’m in my early 20s, but everyone has different lifestyles. I think for girls struggling in New York and they have a best friend that’s kind of like your serious relationship, that’s what it’s like. But the show, I love it because it's fantastical at the same time. I like that it doesn’t become this heavy drama, but because their friendship is so real it carries in any situation they put themselves in. But they’re really comedic geniuses, their lines are just so funny and they connect to everyone on every level, not just girls, which is important, I think. They’re not like, “This is only for us.” It’s like everyone, people I know of all shapes and sizes, male, female, whatever, they find it hilarious.

More of an Ilana.

Well, you guys do look alike!

I hope that becomes a household question, instead of “Are you a Samantha or a Carrie?” people are like, “Are you an Ilana or an Abbi?”

Do you think you’d find it weird to be in a relationship where it’s like, “Shit, they could be siblings?”

Yes. My first boyfriend kind of looked like me but never too much; I don’t think I’d want to hook up with someone that looked exactly like me.

Was it fun being back on set of a TV comedy?

Yeah, I was only there for like three or four days total and also every shoot is different. Their set was great, all the crew and everyone where we were shooting in Brooklyn. It was low-budget, so there’s just a different vibe on every set, they’re not very similar. But the closeness they all had and that the girls, Abbi and Ilana, both had with the crew and hair and makeup and how hyped they were. I love seeing how creatively involved they were with their show, but at lunchtime they weren’t fucking around. They were like with the producers booking tours and talking about shit. They were really business savvy and working hard on stuff, making phone calls, but also really funny and present with everybody.

I know you’ve been doing a lot of indie films lately. Can you tell me about anything coming up that you’re particularly excited about?

When I do movies I always completely forget about them, so if I'm missing out on one ... there's this movie “The Final Girls” is premiering at SXSW this weekend, which is cool, I’m excited about it. Then there’s the movie “Green Room,” which I’m really excited about, where I’m in a punk band, then we get killed by Nazis. That one’s really cool, really great cast. Yeah, I’ve got “Wild Canaries" in theaters right now. And then there’s “The Moment,” which is an extreme drama, which I haven’t done but I’m the lead in it, so I’m kind of new. It’s really fun, I’ve had a really busy last year. All very different kinds of projects and I’m really lucky to be part of them.

Would you ever consider doing a mega blockbuster?

It’s funny because my parents asked me the same question, “When are you going to do a big movie and get money?” I’m like, “It’s not like I’m turning them down.” It’s just the timing of things. If I get sent a script or meet with a new director and I really like it, I make that a priority. Whereas big budget stuff I’m only up for every now and then. Not that I should be picky but I am. I’ve been on a big budget when I was like 16, a terrible Christmas movie. I always just said yes to any job I would get and it was the first time I did a job that I didn’t like and I had been very lucky up until then and I spent three months on the film. Everyone was upset, no one liked each other, we didn’t like the work, all this money being wasted on what? I was like, “I don’t want to do this anymore, otherwise why am I in this game?” There’s so many things you have to deal with anyway, so I made the choice not to. But of course I want to continue working and I’m up for some stuff and we’ll see what happens. I don’t think I read well in the big blockbuster world but maybe one day I will.

And you’ll be back if there’s another “Arrested Development” season or movie?