"I have sex with people different from me": On "Broad City," Ilana's sexuality continues to defy neat labels

Once again, the show pushes the boundaries of sexual fluidity -- and still gives us something to relate to 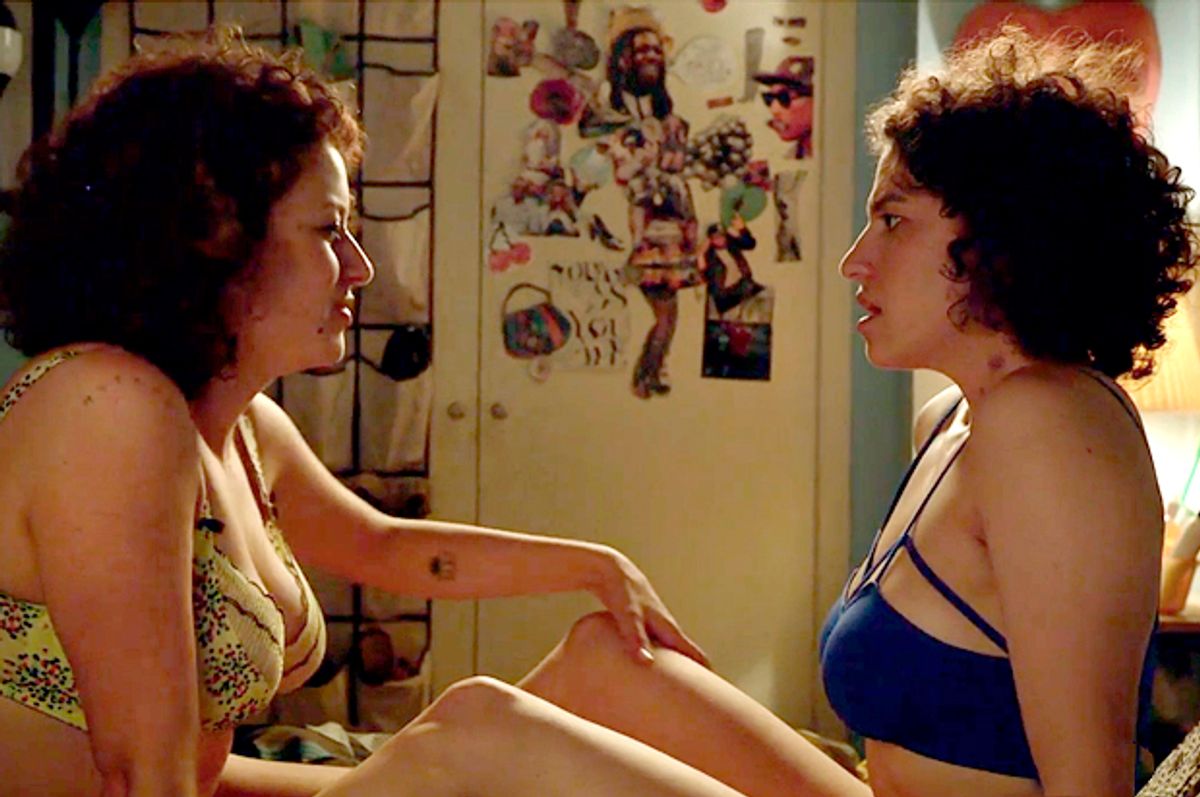 Wednesday night’s “Broad City” finally gave us something that’s been unclear (but alluded to heavily) since the show’s earliest episodes: A clear definition of Ilana Wexler’s sexuality (sort of). I toss in the “finally” because we live in a world that values labels — where “gay” and “straight” make sense but “bisexual” or (gasp) “pansexual” gets people a little confused. So far, though, the show has avoided giving us a neat little box for Ilana — until this week, when she hooked up with doppelgänger Adele (Alia Shawkat) and talked through the intricacies of her sexuality.

When Ilana first meets Adele, her attraction seems to come as a surprise to no one, including herself, best friend Abbi and roommate Jaime. “Dude, I just saw the hottest girl I have ever seen,” she tells Abbi, eliciting no response. “We had the most incredible spark.”

And they do, because the two look exactly alike, which is the whole joke to begin with, but which is also meant to explain Ilana’s attraction to another woman. But we already know the character is a “hedonist,” as “Broad City” co-stars Ilana Glazer and Abbi Jacobson have described her in interviews; it’s been all but written as a disclaimer in the credits that Ilana’s constant search for pleasure involves a certain level of sexual fluidity. Of course she’s attracted to women.

And, ironically enough, it is actually Ilana’s sexual openness that leads her to end her same-sex tryst. “I have sex with people different from me,” Ilana tells Adele after becoming freaked out by how similar they look. “Different colors, different shapes, different sizes. People who are hotter; people who are uglier. More smart; not more smart. Innies; outies. I don’t know, a Catholic person.” (Turns out, Adele is different from Ilana, in a single intolerable way: she “doesn’t smoke pot,” which warrants immediate ejection from Ilana’s apartment.)

Ilana’s same-sex encounter gives us the closest thing to a “definition” for the character’s purposely ambiguous sexuality we’re likely ever to get, and it’s still not entirely clear. And therein lies the beauty of “Broad City”: the show isn’t giving us what we want or what we’re used to getting as viewers, but it’s giving us what is real, and what we often experience as real people who exist in the world. Ilana’s boundless quest for pleasure is exaggerated, to be sure, but the lack of borders adds dimension to her character. It also challenges viewers to accept a female heroine who is never going to fit neatly into a box.