ICYMI: Chris Hayes hosted a mother and her baby during a segment -- and it seemed totally normal 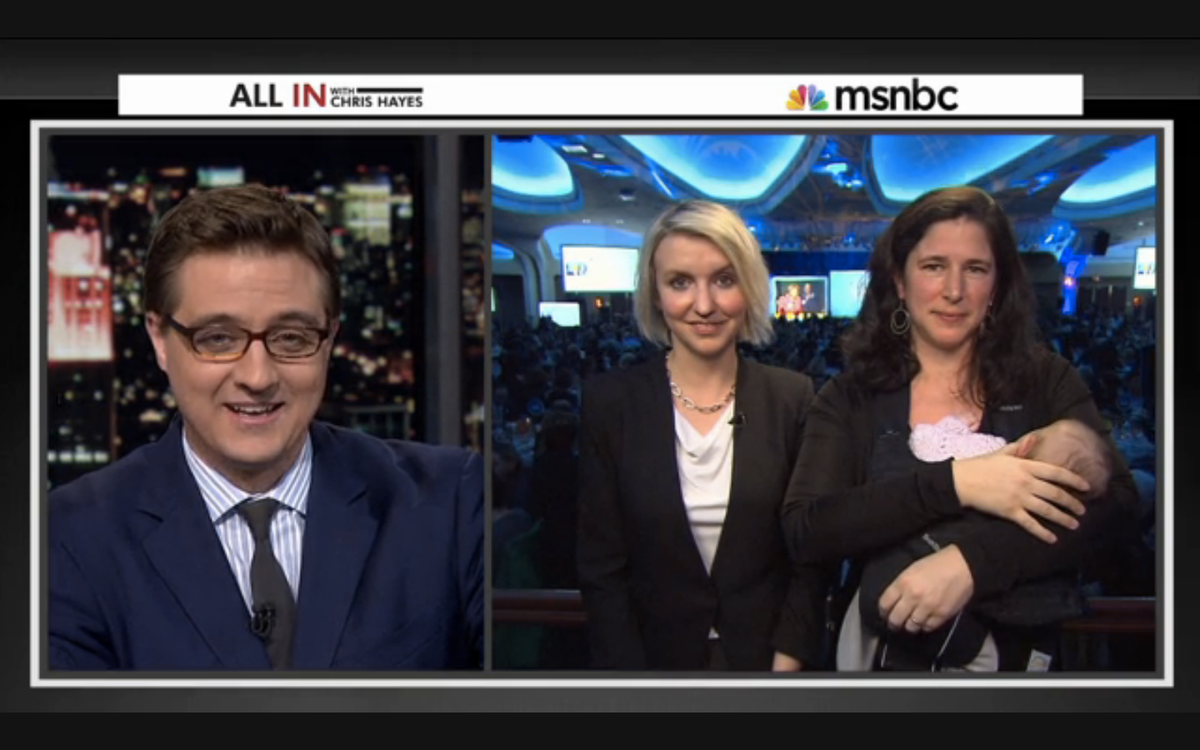 You might've missed it when MSNBC host Chris Hayes welcomed a nine-week-old baby on his program last week, and that's actually a good thing -- or, at least, a good sign for working parents.

During a little-seen segment on the backlash over Hillary Clinton's state department emails, Hayes spoke with senior editor at The New Republic (and former Salon writer) Rebecca Traister, who appeared on air with her infant daughter and -- gasp! -- still managed to do her job successfully. It seemed unremarkable to see Traister offering commentary with a baby strapped to her chest, and that in itself is groundbreaking for working mothers.

As Randye Hoder writes for Fortune, it's rare to see parents -- women, especially -- acknowledge their role as caretakers while they're at work, making Traister's appearance with daughter Bella a breath of fresh air:

In most professional settings, there still is great pressure for women to pretend that their kids don’t exist, at least from 9 to 5. Women feel the need to go out of their way to avoid the stigma—yes, stigma—of being labeled a mom.They don’t say they’re leaving work early for a parent teacher conference. Instead, they say, “I have a meeting.” [...]

And yet here was Traister, in front of tens of thousands of viewers, demonstrating that you don’t have to hide the balancing act—that it is quite possible to have a baby and a brain at the same time. In a public, high-profile, but matter-of-fact sort of way, Traister and Hayes were saying, “Newborn baby, breastfeeding mom, no big deal—let’s get to work.”

As Traister -- who recently wrote an in-depth report on working motherhood -- pointed out to Hoder, though, context was crucial to her decision to go on TV with Bella. The journalist is currently on maternity leave and likely wouldn't have appeared on air at all last week, had it not been for her particular set of circumstances. But because Traister happened to be at an event that allowed her to bring her daughter, and because the producers of "All In with Chris Hayes" (and Hayes himself) had no problem with Bella joining the segment, she was able to work something out.

Even if that sort of flexibility doesn't happen all the time, it sets a great example for how simple it is to accommodate millions of Americans' reality: They are parents, but they are also professionals. It's a totally normal thing, and it can and should be treated as such.

"It seemed totally natural," Hayes told Hoder. “This is part of….normalizing that kind of thing.”

Watch Traister and Bella on "All In" below: