Lambert's one of Nashville's few female chart-toppers these days -- is she laughing at the bros or with them? 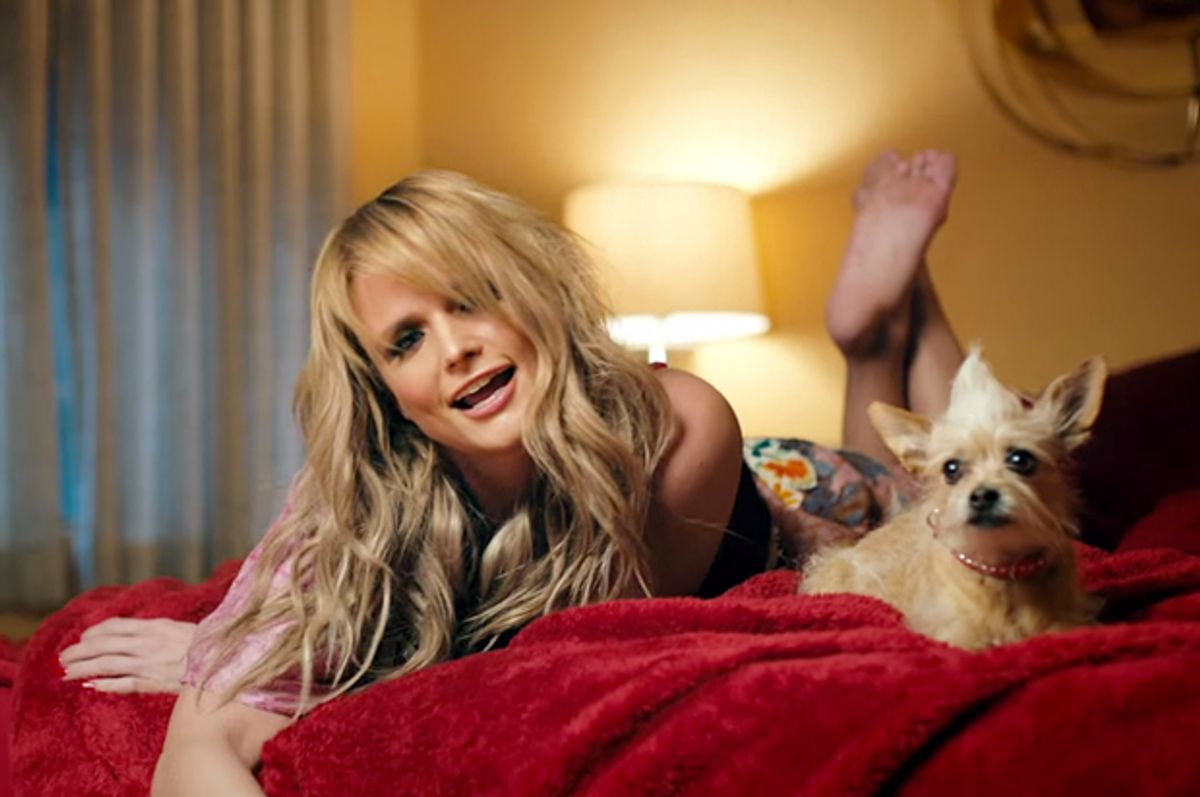 In most parts of the pop landscape, female artists routinely capitalize on the mainstream obsession with sex and sexuality. Performers like Beyoncé, Nicki Minaj, Katie Perry, and Lana del Rey all use sex, and the sexualization of the female body, as a selling point. All of them of course take crap for it; they're often accused of being only talentless bodies rather than musicians, or of damaging women, or of being immoral. The fact that pop music has to be sexualized limits their options and robs them of respect. But, at least as long as they conform to particular beauty standards, it doesn't stop them from performing.

Country music, though, is different. While still reticent by the standards of a Nicki Minaj, perhaps, bands like Florida Georgia Line stock their videos with wall-to-wall gyrating women in bikinis and cut-off shorts, but that obsession with female bodies hasn't translated into opportunities (however limited) for female artists. Country radio is overwhelmingly — almost exclusively — male right now. Beyoncé, Rihanna, Iggy Azalea, Jennifer Lopez and innumerable other women artists can be both sex symbols and stars in pop. But in country, the anonymous video honeys in the cut-off shorts are window dressing. "Like all we're good for is looking good for your friends on the weekend," singers Maddie and Tae sang acidly in "Girl in a Country Song." In that video, a trio of scantily-clad guys pour water over themselves and eat strawberries in slow motion, gender-swapping and mocking standard bro-country tropes. The song hit number one on the country charts — a rare success these days for female performers. Miranda Lambert seems to have been watching; her new single "Little Red Wagon" (written by Audra Mae) is also, arguably, a response to bro-country. But where Maddie and Tae engaged in explicit parody, Lambert's video is more complicated and more ambivalent.

Maddie and Tae are out to show how stupid it is to treat people as objects; they're criticizing the sexism and the cheesy sexuality of bro-country tropes. Lambert thinks the tropes are funny, too — but she also wants to embrace them as a way to be sexy and sexual herself.

The plot of "Little Red Wagon" involves Lambert pulling into a motel off the dusty interstate, but the real point is to watch her strut about in various outfits, including (inevitably) cut-off shorts and a very red vintage swimsuit. Lambert enjoys being a sexual object in the video, teasingly withholding and manipulating her various viewers, on-screen and at home. "You can't ride in my little red wagon / the front seat's broken and the axle's draggin'," she coos as she bats her eyes flirtatiously at the desk clerk in order to get him to bring her foofy little lap dog into the hotel.

But while she enjoys being the bro-country object, she's also the bro-country objectifier. The steamiest moment in the video is when Lambert passes a maid in the hallway. Breathing "oooooh! Ahhhh!" in a Donna Summers vein, she scopes the other woman out and is blatantly scoped out in return. Women in videos are not just objects of male desire, but objects of female desire as well. And if that's the case, then women are not just objects, but are also objectifiers; not just the looked at and sung about, but also the singers looking. Once we've established that, Lambert can head out to the pool, where she and a shirtless, ab-tastic pool boy get to exchange significant glances, too.

The Vegas rock music, complete with a mimed air guitar solo, harks back to Van Halen — lines like, "You're just tryin' to slow this rollin' stone, but I'm onto you babe," rival David Lee Roth in their lusty vaudeville insouciance (albeit with more of a twang.) "I play guitar and I go on the road and I do all the shit you wanna do," Lambert proclaims in a quasi-spoken rap. Women can be sexual objects and stars and express sexual desire all at the same time in hip hop and rock, and Lambert's determined to do it all in country as well. "It ain't my fault when I'm walkin' jaws drop" — except, of course, she's careful to let you know that it is.

For all her swagger, though, Lambert's distaff take on bro-country continues to show some inevitable signs of strain. After passing Lambert, the maid (played by a woman of color) heads into a room to clean, boogieing sensually and occasionally checking herself out in the mirror.  There's no twerking, sure, but there is enough rump-shaking to suggest that Lambert is well aware of the connection between bro-country's brand of objectification and its precedents in hip hop. To get purchase as an objectifier, Lambert has to have that woman of color show up to be an object. Bros can just show up and enjoy the sights, but Lambert has to leverage race and class in order to give herself the same privilege (after all, the woman playing the maid is, as an actor on this video shoot, Lambert's employee in real life, too).

Bro country artists enjoy their polyamorous videos with little evidence of guilt; the more girls, the better. But at Lambert's video's end, she walks away wearing a wide belt emblazoned with "Mrs. Shelton" — reminding the pool boy, and all you video watchers, that she's the wife of country star Blake Shelton, and that you can look but not touch.  For all the flirtation, Lambert still wants you to know that her sexuality is carefully circumscribed.

Maybe at some point Lambert will do her own take on her idol Beyoncé's "Partition," with some explicit window-steaming marital sex. For the moment, though, it's clear why Lambert is the only woman (other than Taylor Swift, who fled Nashville for New York and the pop world) who can put singles on the country chart with any consistency. "Little Red Wagon" is sexy, smart and audacious. In its reticences and negotiations, though, it's also a reminder that country, more than other pop genres, continues to be uncomfortable with women expressing desire. As long as that's the case, country is going to be a male-dominated genre, even if, as Lambert shows, women can, when given the chance, do bro country-style objectification better than the guys ever could.