The media s**t-show is back: Why coverage of Hillary Clinton has been an embarrassment

Hillary Clinton has a reputation for hating the media. The past week shows why that's so easy to understand 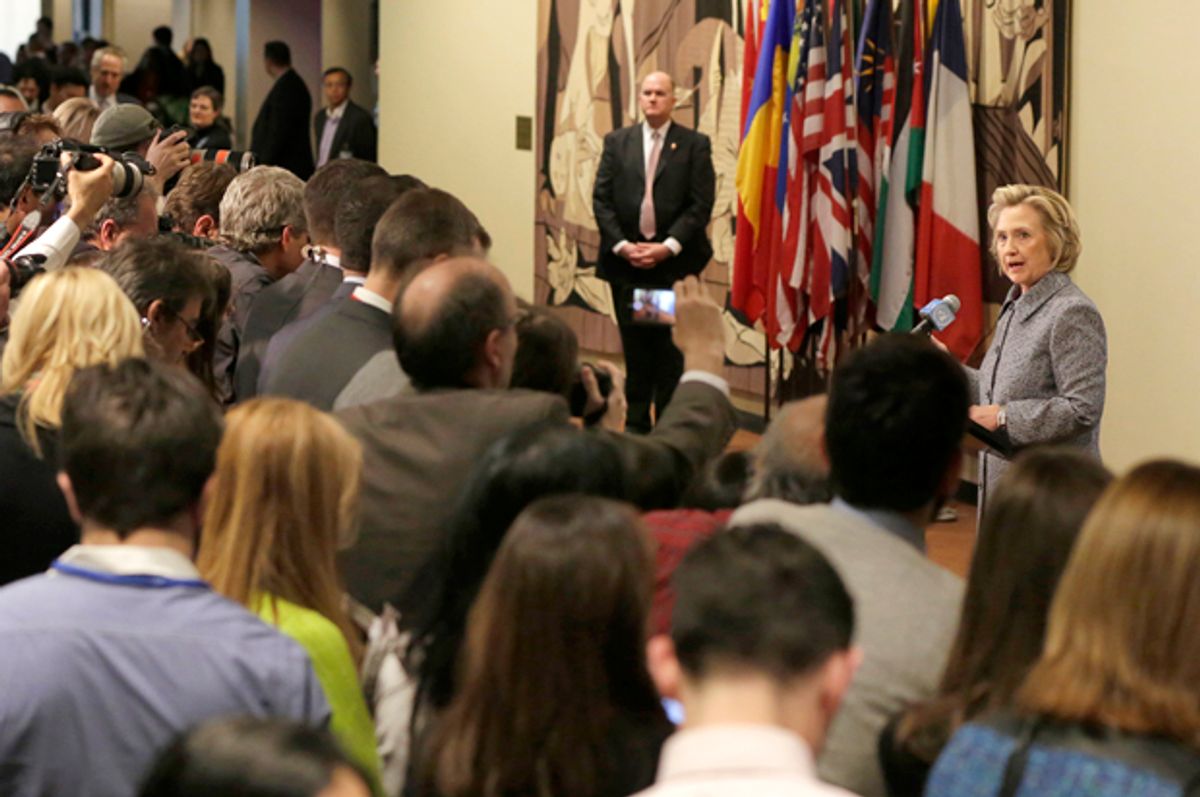 A bit less than a year ago, Politico Magazine released an in-depth piece by Glenn Thrush and Maggie Haberman about Hillary Rodham Clinton’s long and incredibly fraught relationship with the national, mainstream media. At the time the piece was written, the question of whether Clinton would run for president in 2016 was much less settled than it is today, and according to the piece’s authors (who said they conducted dozens of interviews with former or current Clinton insiders) if the onetime secretary of state decided not to run, it would be for one simple reason: her fear and loathing of the political press. “Look, she hates you,” one anonymous source said to the two reporters. “Period. That’s never going to change.”

I’m too young to have truly experienced the Clinton years. During the late '90s, when the country obsessed over Monica Lewinsky and millions of Americans pretended they’d never even heard of this thing called “oral sex,” I was more concerned with Pokemon cards and Sarlacci. But after reading through Politico’s potted history of the media’s treatment of Clinton — and especially after witnessing the absurd press conference she held on Tuesday at the U.N. about what has been called, with a fitting laziness, “emailgate” — I must admit something. Despite finding her views on economic and foreign policy to be lacking, when it comes to her antipathy for the media, I can’t blame Clinton. Not one tiny bit.

Now, at the risk of proving Nietzsche’s maxim about the abyss true, I want to make something clear upfront: My feelings in this regard are inspired more by the behavior of the media than that of Hillary Clinton. I agree with those who say there’s something problematic — at least — about her choice to use a personal email account during her tenure at the State Department. I agree with those who consider it a sign that Clinton is no ally in the effort to increase government transparency. I think her explanation that she used her own address as well as her own server because she thought it’d be more “convenient” is risible. And I find her claim that the 30,000 emails she deleted were about personal things, like yoga and family vacations, improbable at best.

But if I were to put these qualms on a scale, and measure them against the contempt I’ve felt while watching the media cover this “scandal,” I doubt they’d carry even half as much weight. Because while I’m certainly used to seeing my colleagues in the political press devote their time and energy to cynical, superficial stories that few people outside the politico-media elite will bother to read, I’ve never seen them do it with such unabashed gusto. I’ve never seen them be quite so shameless about placing themselves, and their relationship with a politician, at the front-and-center of the national stage. I’ve never seen them be so gleeful and self-conscious about creating a circus, either. It is, quite simply, embarrassing.

This is a collective failing on the media’s part, and not the fault of any one or two or three dozen individual journalists. But for the sake of helping you see how and why the media’s behavior has been so ridiculous, I’m going to point out some recent, sterling examples. Like BuzzFeed editor in chief Ben Smith’s Wednesday piece on the Clinton presser, which spends a surprising amount of its time on the minutiae of political journalism — specifically, how difficult it was for the media to get into position for Clinton because of the U.N.’s being disorganized. He devotes a full paragraph to detailing how reporters showed up early, were greeted by an overwhelmed U.N. staff, and didn’t get into the building until around noon. I am in the media, and I could not care less about any of this; and I’m willing to guess that goes for nine-out-of-10 readers, too.

Smith is no dummy, though, so it’s not like he mistakenly thought this information was what the public craved. No, there was a clear and obvious purpose to this lengthy introduction — to establish the motif of Clinton’s nascent presidential campaign being haphazard, chaotic and, as he put it, “hav[ing] the feeling that the wheels are about to fall off.” In other words, Smith was being meta. Instead of writing about the substance of the email kerfuffle, he was writing about how the Clintons were stage-managing the press conference in such a way as to influence what Smith and the dozens of other journalists there would eventually write. He was writing about himself, creating a report that functioned like an ouroboros of narcissistic frivolity. Clinton seemed to be having “no fun at all,” he complained.

As much as you’d think and hope Smith’s was the worst of the lot, the truth is that his piece was actually one of the best. I’d certainly rather read 100 more pieces about navigating the U.N. bureaucracy and armchair psychoanalyzing Clinton than read even one more like this from John Dickerson of Slate. Clinton, according to Dickerson, who cites no public polling or evidence of any kind, needs to “convince the public that she is a trustworthy person” if she wants to be president. Having apparently decided that pretending to be Clinton’s campaign advisor was the best way to inform his readership, Dickerson went on to write that “[b]etween now and Election Day, there will be other moments where the same instincts Clinton showed [on Tuesday] will be tested again.” In those moments, Dickerson explained, “She’s going to need to seem less like the person we expect.” Um, OK.

Yet while both Dickerson and Smith wrote pieces that made Clinton’s relationship with the media — i.e., themselves — the main story, neither came close in vanity and disingenuousness to the one written by John F. Harris, Politico’s editor in chief. Smith may have assumed enviable powers of clairvoyance, and Dickerson may have forgotten that he and James Carville have different jobs, but Harris did them both one better by translating what Clinton really meant on Tuesday. And it turns out that the real Hillary Clinton is super mean! “Beneath the politesse,” Harris wrote, “was an unmistakable message.” That message? “Go to hell.” His proof? TBD. And then came more than a page of '90s-era history that Thrush and Haberman had done — and done better — already.

As I said earlier in this piece, I’m not motivated here by fondness for Clinton. I wouldn’t prefer the media treat her with the kind of bonhomie they used to reserve for our current president. But instead of writing another piece about what she thinks about them, what they think about her, and what she “needs” to do, it’d be great if more reporters spent some time investigating the tens of millions of dollars that have been given to the Clinton Foundation. Or did some digging to find out which policy experts she’s consulted in the run-up to her campaign. Or took another gander at her exceedingly friendly relations with the titans of Wall Street.

But that kind of work is hard, rarely exciting, and requires the author remain in the background. It’s so much funner to prove your savviness by writing pieces on how Clinton is trying to spin you instead.