How racist frat boys get away with it: Big money and the real Sigma Alpha Epsilon scandal

Wealthy donors don't take kindly to disciplining their own. Oklahoma's president has his work cut out for him 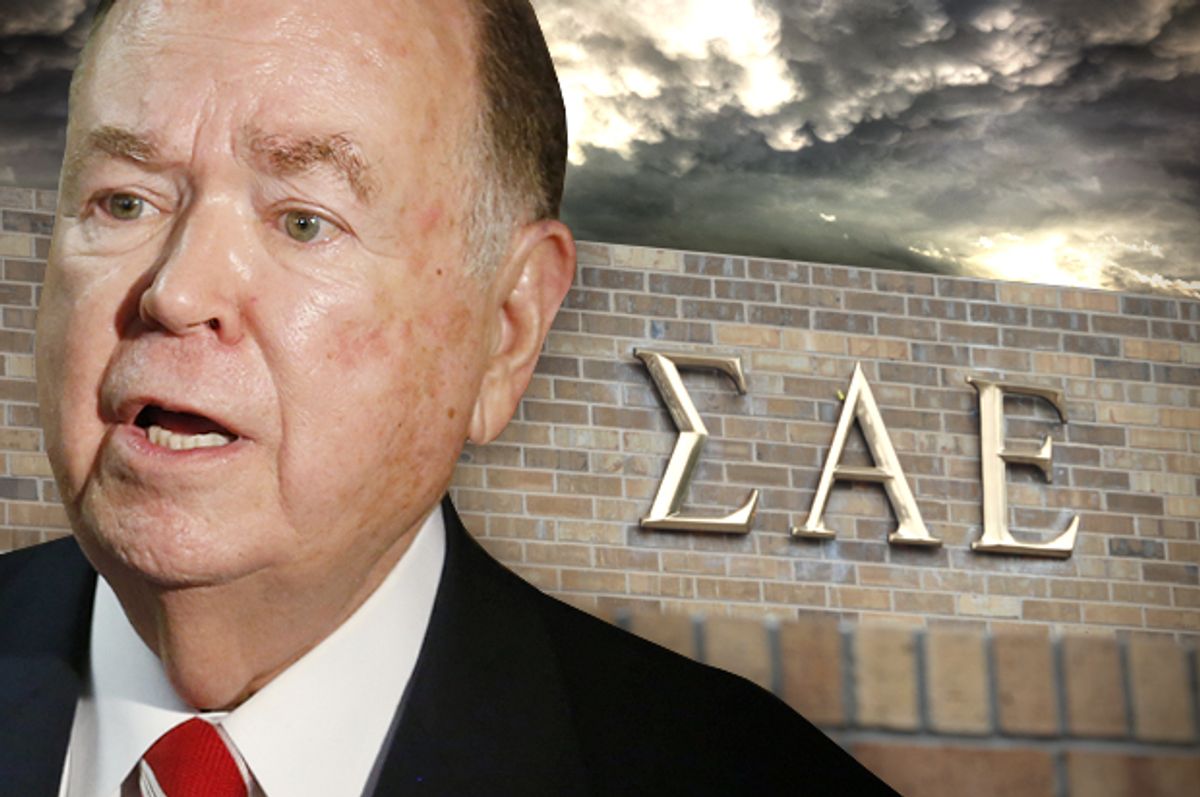 The University of Oklahoma has been in the spotlight in the days since a video showing members of the Sigma Alpha Epsilon fraternity gleefully reciting racist chants was released to the public. School officials have already closed the fraternity chapter and expelled two students involved in the incident. They’ve also been clear that there may be more sanctions to come. University president David Boren called the students in the video “disgraceful" and said that the institution would become “an example to the entire country of how to deal with this issue.”

Boren will have his work cut out for him. While the school is currently united in denouncing the fraternity chapter, Boren may lose that support if he has more sweeping reforms in store for the university’s Greek system. As we’ve seen at other schools, colleges are often more concerned about the prospect of angry donors than they are about racism, sexual violence and abusive hazing on campus. That warped set of priorities is part of the reason that problems often linked with fraternity culture -- including racist and sexist theme parties, sexual assault, violent initiation rituals and dangerous binge drinking -- continue to fester in broad daylight. Because taking on fraternities generally means taking on a school's wealthiest donors, too.

Government agencies responsible for ensuring equal access to education -- like the Office of Civil Rights in its enforcement of Title IX, for example -- are loath to revoke funding for schools that fail to address bigotry, discrimination and violence on campus. But angry parents and well-heeled donors who came out of the Greek system are much more willing to cut the purse strings if they think a school has stepped out of line and is coming down too hard on their boys.

Though gross displays of racism aren't the isolated problem of a single fraternity (or Greek life in general), this also isn’t the first time a Sigma Alpha Epsilon chapter has been sanctioned for racism. As Jamelle Bouie pointed out on Tuesday over at Slate, a chapter at Oglethorpe University was disciplined in 2000 after members threw bottles and shouted racial slurs at a group of visiting black students. Washington University suspended a chapter in 2013 after pledges sang racial epithets at black students as part of a rush event. There have also been sanctions at Clemson University, Texas A&M University, Syracuse University and the University of Cincinnati, among others.

The fraternity also has a dangerous history of abusing members. In 2013, Salisbury University suspended its chapter after a pledge went public about hazing at the fraternity. According to former pledge Justin Stuart, recruits were confined in a basement for nine hours, deprived of food and water and forced to stand waist-deep in ice water while reciting the frat’s creed. They were forced to drink to the point of near unconsciousness. Stuart told Bloomberg News that he was willing to endure the abuse because he knew that the frat was well-connected, a pipeline to future jobs on Wall Street.

The school suspended the chapter in response to a lawsuit. In retaliation for the suspension, J. Michael Scarborough, a founder of the school's Sigma Alpha Epsilon chapter and an investment giant, withdrew a donation of $2 million. Because the school took a hard line against torturing students. (The fraternity is up for review and a possible return to campus this fall.)

Scarborough isn't alone in using his wallet to express his dismay. And this kind of loyalty isn't isolated to Sigma Alpha Epsilon. After a student at Trinity College broke his neck diving into a shallow pool at a 2013 rager at the school’s Psi Upsilon house, the college’s former president instituted major reforms to the Greek system, including a requirement that fraternity and sorority members maintain a 3.2 grade-point average and go coed. In response, angry parents and alum vowed to stop giving. The protest didn't reverse the policy, but the outrage from donors is reported to have been a factor in former James Jones' decision to retire early.

And a mass defection of the good old boys with fond memories of their days spent crushing beers (and hey, maybe singing racist chants) in a frat house could spell financial trouble for universities -- or career trouble for university presidents -- serious about reform. In 2013, 60 percent of donations to universities that topped $100 million came from fraternity alumni. Data shows that fraternity men account for 85 percent of Fortune 500 CEOs, and they populate other powerful institutions -- from Wall Street to the White House.

Until colleges start finding the prospect of preventable death, rape and assault more frightening than a network of angry donors, nothing will change in the Greek system. And while fraternities are not singularly responsible for -- or home to -- a culture of violence, white privilege and male entitlement, a long tradition of permissiveness around dangerous and bigoted frat "antics" has allowed these problems to continue largely unchallenged at an institutional level. Discipline is often administered whack-a-mole-style rather than going at the roots of a system of class privilege, misogyny and racism. A system that is propped up by wealthy donors.

Racist chants or rumors about "sexual assault expected" aren't isolated to Sigma Alpha Epsilon. These problems are structural. The solutions, then, have to be, too. Boren and the University of Oklahoma seem united, for now, on the issue of addressing the kind of racism captured in that video. According to statements from the black student group Unheard, Boren is also working with them to institute reforms beyond the Greek system. But if the school wants to take on more than a single frat or a particularly odious example of racist college dudes, it will have to take on the institutional structures that condone the racism and misogyny that is so often played for laughs in fraternity culture. And while it appears the university's donors have so far been silent about the expulsions and evictions that have come about in the wake of the video, they may not stay quiet for long.