Final tweets: What we can learn from these last public statements

From profound to playful to mundane, final tweets offer an intimate view of a public figure's final days 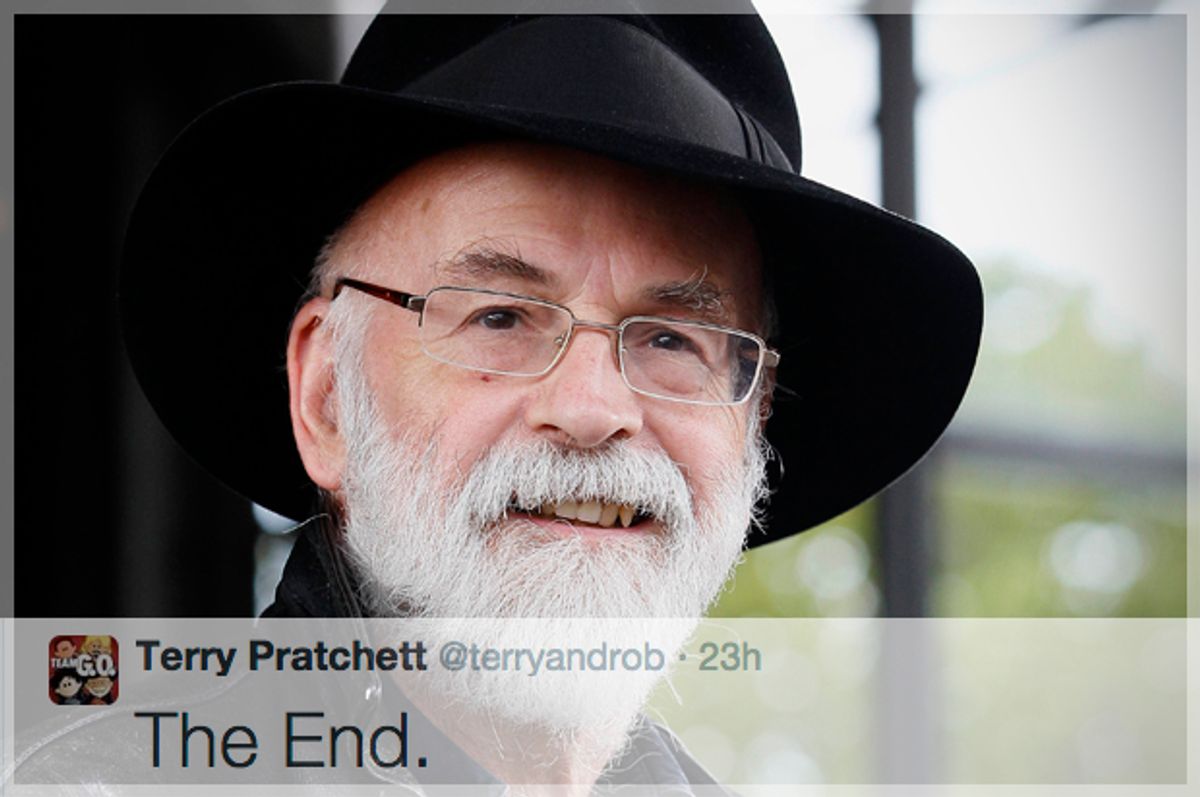 One thing that drives us to create is the desire to leave something behind when we die. Legacy is an impulse as old as humanity, responsible for children, works of art, legislation, buildings and even empires — what is the last will and testament if not the desire to have the final word on what happens to the remnants of your life after you die? Social media accounts might not feel as serious as a final book manuscript or an endowment, but Facebook timelines of the deceased offer grieving friends and family the space to share remembrances, and Twitter, with its odd mix of broadcast platform and intimate interaction, now offers unprecedented access to the final words of public figures. There's even an art project Tumblr dedicated to collecting these messages.

"Discworld" author Terry Pratchett, a legend in the fantasy fiction world, kept writing even as his Alzheimer's disease advanced. He wrote Death as a character who always spoke in all-caps. His assistant posted these tweets yesterday after his death.

Some, aware of the inevitable on the horizon, offer powerful, meaningful parting tweets they hope will inspire or comfort, perhaps crafted with the help of family or trusted associates before or even after death. Unanticipated final tweets, on the other hand, are often a shocking reminder of the brevity or even mundanity of life and the peculiarities of Internet culture and online interaction. Here are more final tweets that left a lasting impression:

Harris Wittels:
The beloved comedian and screenwriter was generous on social media with his time and his humor

Robin Williams:
Twelve days before the legendary comedian and actor took his own life, he posted this tribute to his daughter

Maya Angelou:
The acclaimed author posted this advice five days before her death

Roger Ebert:
The legendary film critic made Twitter his own in his brilliant career's final act

Hugo Chavez:
The Venezuelan president lived with cancer for two years. He died in a military hospital in Caracas on March 5, 2013

Cory Monteith:
The "Glee" star died of an alcohol and heroin overdose in Vancouver

Davy Jones:
The Monkees frontman died of a heart attack after riding horses at his home in Florida

Andrew Breitbart:
Conservative commentator Breitbart collapsed on a sidewalk in Brentwood, Calif., not long after

Clarence Clemons:
The Big Man himself, the soul of Bruce Springsteen's E-Street Band, died from complications of a stroke about a month after this announcement

Elizabeth Taylor:
The screen icon was admitted to Cedars-Sinai Medical Center for complications from congestive heart failure in February 2011, where she died a month later

Whitney Houston:
The powerhouse vocalist accidentally drowned in a Beverly Hilton Hotel guest room; heart disease and cocaine were determined to be factors

DJ AM:
Adam Goldstein survived a 2008 plane crash with Blink-182's Travis Barker that claimed the lives of four people, and died of an apparent overdose a year later