Bottled water is a scam: PepsiCo, Coca-Cola and the beverage industry's greatest con

Multinationals have made billions off the myth that tap water is unhealthy. Here's what they don't want you to know 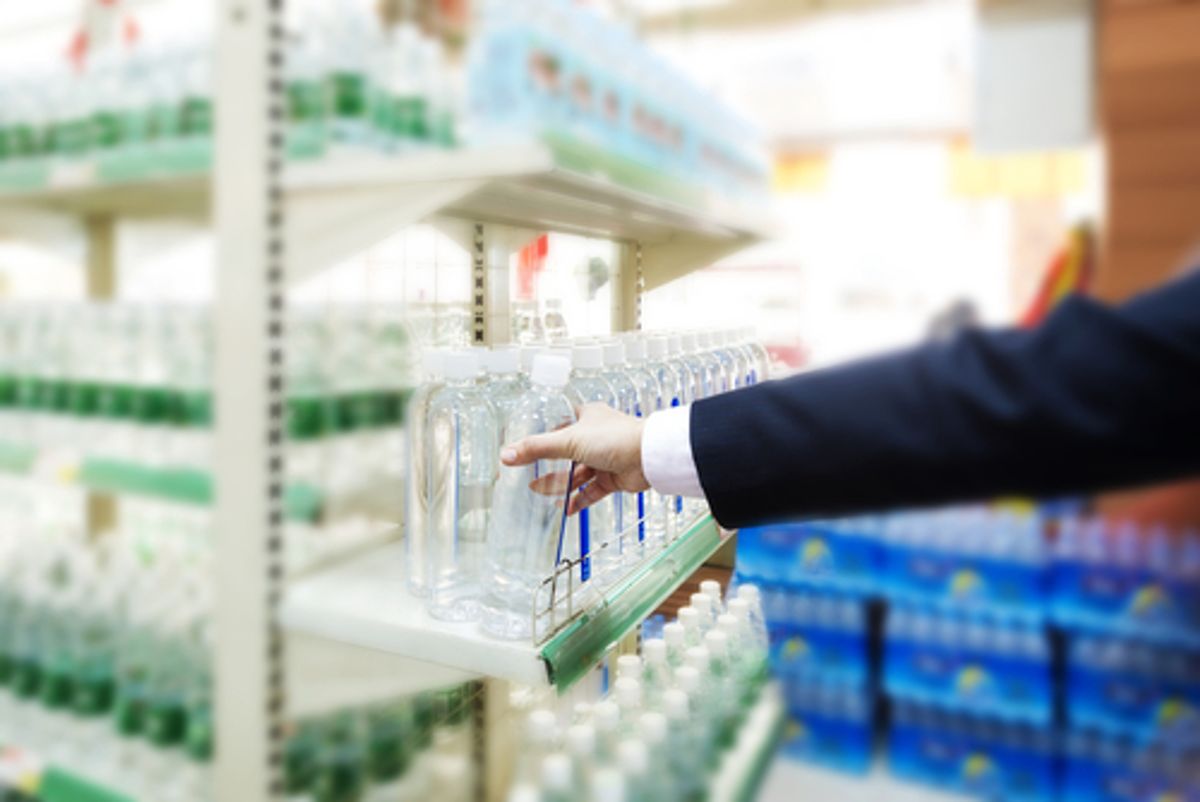 The following is the latest in a new series of articles on AlterNet called Fear in America that launched this March. Read the introduction to the series.

The biggest con job perpetrated on the consumer is not some shady operation selling bogus cures through TV infomercials. America’s biggest snake-oil salesman is actually the beverage industry, or Big Bev, which resells the simplest and most vital product for thousands of times its value. That product is drinking water.

Multinationals like PepsiCo, the Coca-Cola Company and Nestle rake in a combined $110 billion a year selling bottled water worldwide. In the U.S. alone, more than half the population drinks bottled water, which accounts for about 30% of liquid refreshment sales, far exceeding the sales of milk and beer (only soft drinks sell more).

But the expensive water the beverage industry sells is no better — and possibly worse — than the water you get from your tap (and often, the water they sell is tap water). So how did these companies fool the public into paying a few bucks for something that costs a few pennies per gallon from a faucet?

Fear. These multinationals have spent millions on marketing to convince consumers that tap water tastes bad, contains high levels of contaminants and poses a danger to human health. Municipal water, they claim, is a scourge, and the only way you get drink healthy water is to buy it through private beverage companies, at up to 2,000 times the cost of getting it from a tap.

And it appears that their tactics are working. With some 92% of tap water meeting state and federal standards, the U.S. has the cleanest and safest public water supply in the world. Yet polls have shown that that a great majority of Americans worry a great deal about the public water supply.

To make matters worse, the supposedly healthy alternative is virtually unregulated. The water from a public utility is constantly monitored under Environmental Protection Agency standards, but bottled water does not have to meet those standards. In fact, independent testing of bottled water has indicated that microbiological impurities and high levels of fluoride and arsenic posed health concerns.

“Water fountains used to be everywhere, but they have slowly disappeared as public water is increasingly pushed out in favor of private control and profit,” writes Peter Gleick in his book Bottled & Sold. “[They] have become an anachronism, or even a liability, a symbol of the days when homes didn’t have taps and bottled water wasn’t available from every convenience store and corner concession stand. In our health-conscious society, we are afraid that public fountains, and our tap water in general, are sources of contamination and contagion."

When towns and cities still didn’t have the means to provide all homes access to clean water, sanitary water fountains were a benefit to public health. The irony today is that public water is no longer viewed as a safe option, yet poorly regulated bottled water is.

Nine years ago, the high-end bottled-water brand Fiji began a marketing campaign in which it sniffed, “The label says Fiji because it's not bottled in Cleveland.”

Clevelanders, angered they were being unfairly insulted because of some issues with their water decades back, took action. The city’s water utility even bought some bottles of Fiji and other top brands like Dasani, Evian and Aquafina and tested them against Cleveland tap water. And guess what? Cleveland’s tap water was the purest of them all. Moreover, Fiji had a 6.31 micrograms of arsenic per bottle. While under the amount of 10 micrograms allowed by the EPA and Food and Drug Administration, it was notably high in comparison.

But Cleveland only tested a few samples of bottled water. Consumers can’t be sure what they’re getting, as the contents can vary from bottle to bottle. That's because bottled water, which is regulated by the FDA, doesn’t have to meetthe stricter standards the EPA requires. Tap water needs to undergo regular testing for bacteria and microbes such as E. coli, while bottled water doesn’t. Further, the EPA requires water suppliers to use certified labs to test their water, but there’s no such FDA requirement for water bottlers. The bottlers also don’t need to send off reports to regulators about problems they might find with their product. There are no requirements for disinfection or filtration for bottlers that water utilities must meet. Consumers are left at the mercy of a corporation to protect them from their product.

What’s in a Name?

While Fiji water actually comes from the South Pacific Island that bears its name, close to half of the bottled water bought by consumers is nothing more than filtered tap water with fancy names, according to Food & Water Watch. Much of the bottled water Americans drink, including top brands like Aquafina and Dasani, is pretty much the same stuff you get from your own faucet, perhaps run through an additional filter by the bottler.

"These are the numbers the bottled water industry doesn't want you to see," says Food & Water Watch executive director Wenonah Hauter. "These figures reveal that more and more bottled water is basically the same product that flows from consumer taps, subsidized by taxpayer dollars—then poured into an environmentally destructive package, and sold for thousands of times its actual value."

The environmental concerns of bottled water are well documented. Made from fossil fuels, the plastic bottles are often not subject to state bottle-return programs and end up littering the landscape, even invading our waterways and oceans where they break down, leaching petrochemicals back into the water and severely impacting marine life. There are even some questions about the industrial chemicals the bottles are made out of mixing with the water contained inside. Bisphenol A is notably worrisome. It’s an endocrine disruptorthat could lead to reproductive issues, is known to disrupt normal heart muscle function and has been linked to some cancers.

Why are the health issues of bottled water so widely ignored, while at the same time consumers are fed Big Bev's horror stories about tap water? It’s clear the industry works hard creating a climate of fear regarding tap water in order to maximize its profits. And seeing how we consume bottled water in such great quantities, it’s obvious that the public has bought into this nonsense.

Tap water has a bad reputation, which is not well deserved, making it an easy target for the beverage industry. And while Big Bev has lobbyists, industry organizations and public relations companies to boost its profile, this is not really an option for our nation’s water utilities. There’s nobody to put a correct perspective on unfortunate events such as water main breaks and cryptosporidium and E. coli contamination on the rare occasion that they impact water quality in an area. In the U.S., our water utilities are very safe overall, but we only hear about them when something goes wrong. This has led to mistrust of the utilities and even conspiracy theories about public water.

Fluoridated water, in particular, is widely believed to be proof of some government malevolence. As far back as the Cold War era, anti-fluoride activists claimed that fluoridation was part of a mind-control scheme. Critics of fluoride point to a pile of other health consequences that have never been proven. To date, the only known negative consequence of proper water fluoridation is dental fluorosis, which can create pitting and mottling on children's teeth, a condition which is mostly cosmetic.

There is a legitimate debate as to whether governments have the legal basis to add chemicals, such as fluoride, to drinking water that do not improve its safety. There’s also a point to be made that people can’t opt out of public fluoridated water. But unfortunately, any valid discussion of the topic is overshadowed by conspiracy theories that further fuel fears of tap water.

But while public water resources must reveal the contents of their water, including fluoridation, you have to do some digging to find out if your bottled water contains it; this information is not on any label. Unsuspecting consumers who thinking they’re avoiding fluoride by drinking bottled water could be getting a good dose of it anyway.

This lack of transparency helps Big Bev in its mission to convince the consumer that its product is superior, and that tap water is dirty and contaminated. Such omissions help the beverage industry create a perceived need for bottled water.

Now that it's got people genuinely afraid of tap water, Big Bev is trying to take public water sources away from the public. After all, “the biggest enemy is tap water," according to Robert S. Morrison, the vice chairperson of PepsiCo in 2000.

The industry is working on restaurants, convincing them to sell customers bottled water instead of giving them tap water as they’re seated. Even worse, whole sports stadiums, where beverage companies heavily market their products, are being built without any drinking fountains in order to force thirsty fans to buy bottled water and other beverages at inflated prices.

“When we’re done, tap water will be relegated to showers and washing dishes,” says one beverage executive.