The Democratic Party is facing a Catholic apocalypse

White Catholic voters used to be reliable Democrats, but that's no longer the case—and it foretells bigger problems 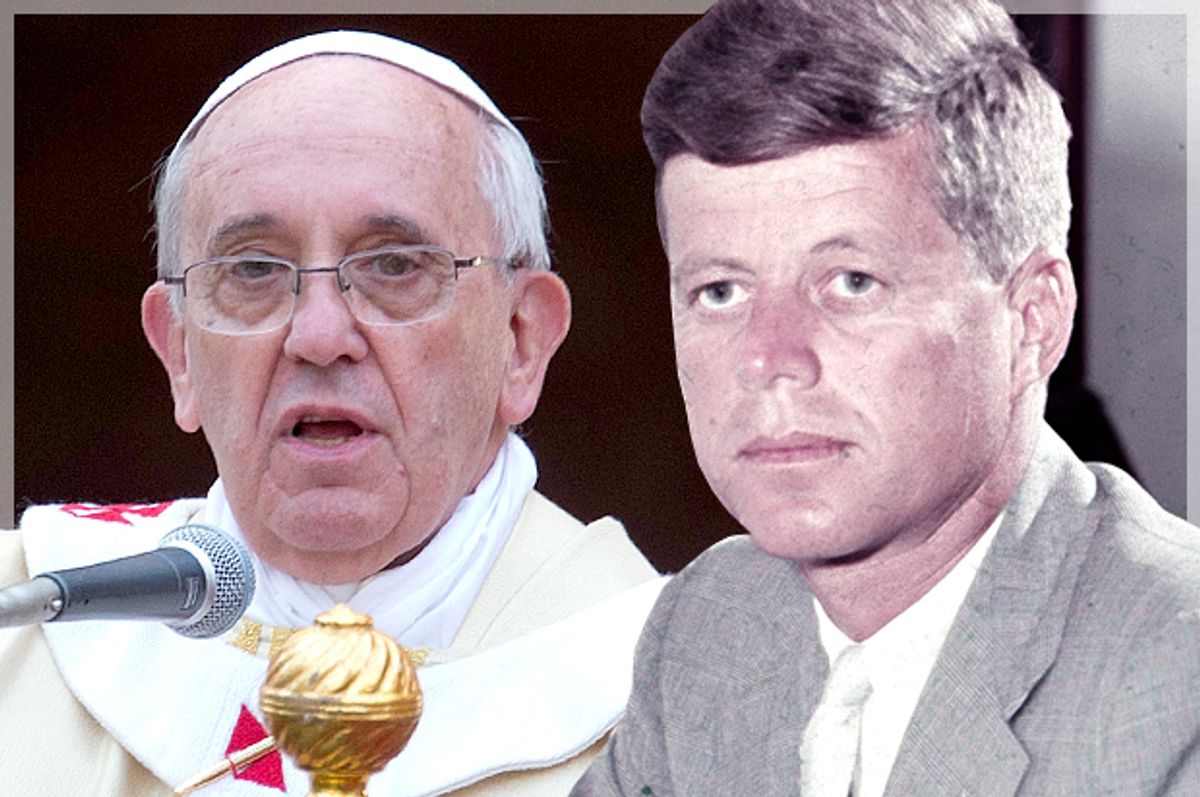 It’s one of the central contradictions of American politics: that there’s no such thing as the “Catholic vote,” yet the Catholics vote still matters.

There’s no “Catholic vote” in terms of Catholics representing an electoral bloc that votes according to what their bishops tell them, or in lockstep with the tenets of their religion. Yet winning Catholic voters has been essential to almost every presidential victory in modern times. And the defection of Catholics voters has played a role in some of the most consequential congressional turnovers in recent history — from 1994 to 2014 — making Catholics the ultimate swing voters. And for Democrats, that could be bad news.

These are ominous signs for the Democrats, evincing a new and growing allegiance with the Republican Party that has long-term implications.

So why are white Catholics abandoning the Democratic Party? There are some long-term trends at play. Steve Krueger, head of the group Catholic Democrats, notes that conservative bishops have been beating the war drums since the George W. Bush administration, even going so far in some cases as to argue that “good” Catholics can’t vote for Democrats because of their support for abortion rights and, more recently, same-sex marriage -- which has resulted in an increased politicization of the church. “The bishops have gone from pastoral advocates to partisan enforcers,” Krueger said. “It’s gone from the old saying of ‘Pray, Pay and Obey,’ to ‘Obey, Pay and Pray’.”

Stephen Schneck of Catholic University’s Institute for Policy Research and Catholic Studies has noted that there’s been a certain “distillation” of the Catholic vote as a record number of presumably more liberal-leaning Catholics — some one-third of those raised Catholic — have left the faith altogether. “More and more of those who remain are those who actively choose to embrace the church and its teachings,” he wrote.

But neither of these trends explains why white Catholics have abandoned the Democratic Party so suddenly and so dramatically. After all, in 2008 Barack Obama managed to keep his margin of loss of white Catholic voters to John McCain to just 5 points. But four years later, he lost the white Catholic vote to Mitt Romney by a stunning 19 points.

Krueger points to the Catholic bishop’s demonization in 2011 of the “contraceptive mandate” in the Affordable Care Act, and their subsequent ginning up of the war on “religious liberty” -- which was joined by elements of the religious right and fused with its war on Obamacare -- as another factor helping to drive Catholics toward the GOP. And the numbers bear Krueger out. According to Pew, between 2009 and 2014, the number of white Catholics who said the Obama administration — and by inference the Democratic Party — was “unfriendly to religion” more than doubled from 17 percent to 36 percent.

Pew gives even more hints about what’s driving the shift with its breakdown of the issues that proved important to various groups of religious voters in the 2014 midterms. It turns out, for example, that Catholic Republicans are just about as dissatisfied as Republican Evangelicals with what they see as the GOP’s failure to cut spending. A total of 47 percent of Catholic Republicans say the GOP is “too liberal” on spending, which is just 1 point lower than Evangelical Republicans. The other area where white Catholics feel the GOP isn’t being tough enough is immigration: Just under one-third say the GOP is too liberal here, again similar to the 35 percent of white Evangelicals who think there should be more of a crackdown on undocumented immigrants.

This concern about government overreach with the Affordable Care Act and out-of-control spending, as well as about illegal immigration, points to a “Tea Party-ization” of white Catholics. And trends in Congress bear this out. Even as Catholic voters first began to shift their loyalties in terms of presidential elections, the House of Representatives remained a Catholic Democrat bastion. In 2009, there were almost three times as many Catholic Democrats as Catholic Republicans — 98 Democrats to 37 Republicans. But as of 2015, House Republicans who identify as Catholic outnumber Catholic Democrats — 69 to 68 — for the first time ever.

According to William D’Antonio, who is with Catholic University’s Institute for Policy Research and who has studied the religious composition of Congress extensively, what’s driving this trend is the increasing number of Catholics being elected from congressional districts in the South. There are more Catholics in the South overall as a result of population shifts from the Northeast and Rust Belt states, as well as Hispanic migration. But even then, Catholics seem to be punching above their weight electorally speaking. For instance, D’Antonio notes that Catholics comprise less than 10 percent of the population in North Carolina but hold two (or roughly 15 percent) of the state’s 13 congressional seats.

And the difference between these Southern Catholic Democrats and their Northern and Midwestern counterparts is dramatic, as can be seen by their ratings on the voting scorecard issue by the Catholic social justice lobby Network, which rates key congressional votes on issues like social welfare and defense spending and immigration reform.

In 2014, Renee Ellmers, a Catholic who represents North Carolina’s 2nd District, voted with Network’s left-leaning social justice priorities only 20 percent of the time, and Walter Jones Jr., a Catholic who represents the 3rd District, did only slightly better at 50 percent. Typically, D'Antonio says,“if you look at the Catholic Democrats in the House, you will see that most vote 80-to-100 percent for Network’s priorities."

What does this Tea Party-ization of white Catholics mean for Democrats? On a national level, the Democrats’ weakness among white Catholics is for now largely being compensated for by its strength with Hispanic Catholics, who vote overwhelmingly and increasingly Democratic. While George W. Bush managed to get one-third of the Hispanic vote, McCain got only one-quarter and Romney just one-fifth. This meant that even with the massive defection of white Catholics in 2012, Obama still eked out an overall victory on the Catholic vote by 2 points. But that narrow margin means that Democrats can’t afford to lose any more ground with white Catholics.

Things get more dire at the state level and pose particular challenges to Democratic efforts to win back control of either chamber of Congress. In the 2006 off-year election, the white Catholic vote spilt just about evenly between Democratic and Republican congressional candidates. But by 2010, a yawning 20-point gap opened up that increased to 22 points in 2014.

“The shift in the Catholic vote should really be a wakeup call to the Democrats,” says Krueger. “White Catholics are 18 percent of the electorate and Catholics vote 1 to 2 percentage points above their representation in the overall population. This is a significant voting bloc that now perceives Republicans as being more welcoming to people of faith.”

Patricia Miller is the author of "Good Catholics: The Battle Over Abortion in the Catholic Church." Her work on politics, sex and religion has appeared in the Atlantic, the Nation, Huffington Post, RH Reality Check and Ms. Magazine.