Congress' "doc fix" dilemma: Why reports of a long-sought permanent "deal" should be treated skeptically

Boehner and Pelosi are negotiating a permanent fix to a recurring policy problem? In this Congress? 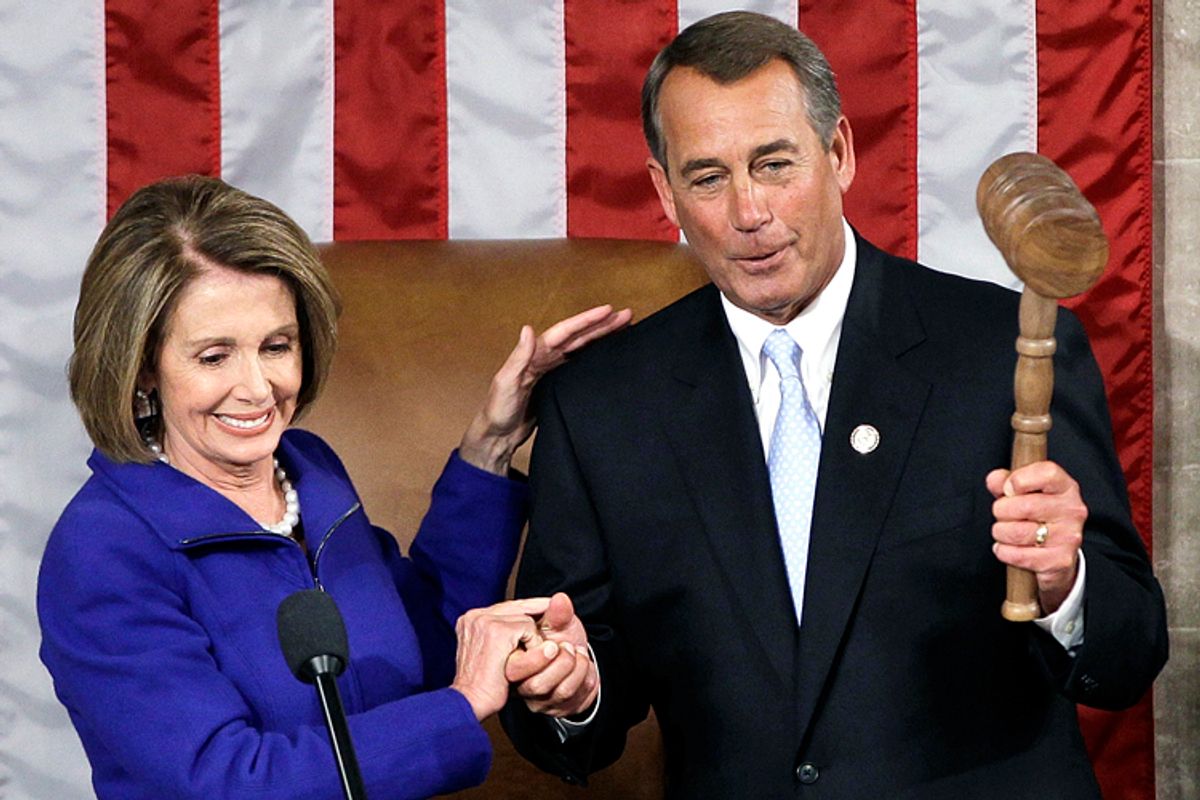 Something bizarre and unprecedented in recent history is happening in the House of Representatives: the majority and minority party leaders are performing an archaic ritual called "negotiating bipartisan legislation to fix a lingering policy problem." History books suggest that this is something that was not especially uncommon in previous Congresses in earlier eras, but it's been sighted rarely in more polarized years as the majority party tends to leave the minority party in the ditch, picking daisies.

The legislation that Speaker John Boehner and minority leader Nancy Pelosi are allegedly negotiating is the long-sought permanent "doc fix," one of those items that important members of Congress say they are "hopeful" about passing at the beginning of each Congress but then never goes anywhere because passing it would require a minimal level of discomfort.

This dates back to the 1997 Balanced Budget Act and the adoption of the Sustainable Growth Rate (SGR) model to determine Medicare payment rates to doctors. The model tried to ensure that Medicare payments didn't exceed economic growth. This all sounded well and good in the late '90s, when experts for inexplicable reasons assumed that we would have like 6% economic growth forever, but some funny things have happened in the economy since then. So approximately every year since the 2000-2001 recession, the American Medical Association and associated doctor lobbies have sought and received a temporary "patch" -- the "doc fix" -- that prevent the automatic cuts from going into place. At first those cuts may have been ~2% per year, but accrue them over time, and doctors are looking at about a 21% payment cut when the next "patch" expires at the end of the month.

The AMA doesn't enjoy facing this precipice every year and has long sought the permanent solution to what they, and many members of both congressional parties, agree was a failed experiment. Repealing the SGR, though, presents political problems for both parties, and that's why it never gets done.

Modern Healthcare, among other outlets, reported last week that there's an "emerging" permanent "doc fix" deal being hashed out between House Republicans and Democrats. It would cost about $200 billion dollars over the ten-year budgeting horizon. Over that same period it would be partially offset by about $70 billion in cuts. "Those spending reductions are anticipated to be split roughly evenly between cuts to providers and changes to benefits," Modern Healthcare reported. "The latter is expected to include increased cost-sharing for wealthier Medicare beneficiaries."

Even in that brief summary we can detect the political problems here for both Republican and Democratic members of Congress. Since they proved too difficult for previous, marginally more competent Congresses to surmount, I'm skeptical that this Congress, which can't pass a permanent solution to anything beyond the naming of a post office, will have better luck.

The problem for Republicans: Did you notice that "$200 billion" figure above? Mmhmm. And did you see that bit about these costs only being "partially offset"? MMHMM. If conservatives are going to be sold on passing a $200 billion package for anything that isn't rampant warmaking, they are going to want full offsets. The House leadership will try to tell them that after the first ten years, those initially modest Medicare cuts will start to accrue into some serious savings -- well worth the initial sticker shock. And it arguably appeals to the noble cause of Truth in Budgeting to fix the issue permanently instead of just throwing billions of dollars at doctors each year when they come a-lobbying.

But Heritage Action is already telling conservatives that nothing short of full offsets over any period should be acceptable:

“Far from a gimmick, the annual Medicare ‘doc fix’ process has saved taxpayers $165 billion since 2003,” Dan Holler, the communications director for Heritage Action said in a statement earlier this week. “Any permanent solution must be financed with permanent Medicare savings, period.”

Holler went on to say that Americans didn’t hand Republicans a historic House majority to engage in “more deficit spending and budget gimmickry.”

“Any deal that only offsets a fraction of the cost, like the one currently being discussed behind closed doors and leaked to the press,” Holler said, “is a non-starter for conservatives.”

And so conservatives are already coming up with fanciful ideas for covering the gap. Consider this example from Louisiana Rep. John Fleming, one of those Real Conservatives who's always good for a line. "Fleming said he believes the party's best option is to slash entitlement spending," The Hill reports, "starting with creating work requirements for welfare and by reforming food stamps." Some would say that this sort of blatant poor-punching would be a deal-breaker for Democrats.

As for those Democrats, any Medicare offsets are going to be a problem, even if they're low-hanging fruit (modest provider cuts, enhanced means-testing for wealthier beneficiaries). Democrats learned a harsh lesson in this following the passage of Obamacare, the costs of which were offset in part through hundreds of billions of dollars in Medicare Advantage savings -- provider cuts, not cuts in benefits. These were easy cuts, and ones that Rep. Paul Ryan included in his budgets. But the fact that Republicans agree with these cuts hasn't stopped them from clubbing Democrats over the head with them for the past three elections. Pelosi is trying to sweeten the deal for Democrats by tucking in a reauthorization of the Children's Health Insurance Program, but that may not be enough to get them to touch Medicare again (and it also could scare off Republicans, who think that children should pull themselves up by their bootstraps when they're sick instead of getting fancy-pants medical care.)

It's surprising that House Democrats and Republicans have gotten this far in negotiating anything. Congratulations to them, unifying for the common good of serving an incredibly powerful lobby! It's just hard to see how this doesn't fall apart along the usual lines over the next two weeks.