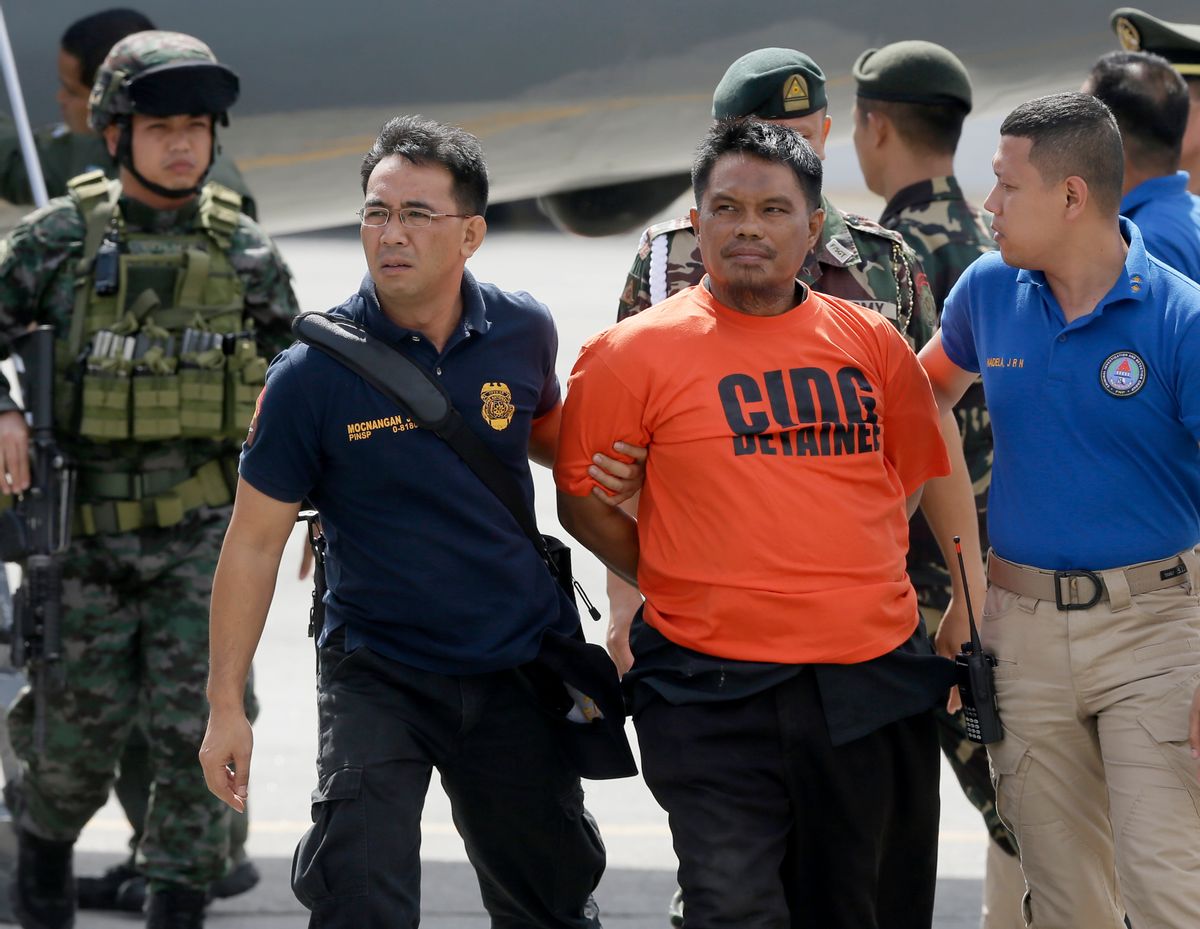 Army and police forces escort handcuffed Mohammad Ali Tambako, the leader of a Muslim rebel group in the south who has been linked to bombings and a beheading and accused of protecting two terror suspects wanted by the United States, shortly upon arrival at Villamor Air Base at suburban Pasay city south of Manila, Philippines Monday, March 16, 2015. Tambako and five of his men were arrested late Sunday while the militants were traveling in a motorcycle sidecar taxi to a seaport in southern General Santos city.(AP Photo/Bullit Marquez) (AP)
--

MANILA, Philippines (AP) — Philippine troops have captured the leader of a Muslim rebel group in the south who has been linked to bombings and a beheading and accused of protecting two terror suspects wanted by the United States, officials said Monday.

Army and police forces arrested Mohammad Ali Tambako and five of his men late Sunday while the militants were traveling in a motorcycle sidecar taxi to a seaport in southern General Santos city. Three grenades and two guns were seized from the militants, who did not put up a fight, according to a police report.

Tambako, who formed the group Justice for Islamic Movement with about 70 armed fighters last year, has been suspected by the military of giving refuge in his southern stronghold to top Malaysian terror suspect Zulkifli bin Hir, also known as Marwan, and long-wanted Filipino bombing suspect Abdul Basit Usman.

The United States and the Philippines have offered huge rewards for the capture and prosecution of Marwan and Usman. Marwan was reportedly killed in a Jan. 25 raid by Filipino police anti-terror commandos in the marshy heartland of the country's south. The FBI said in February that DNA analysis suggested that Marwan was the militant killed by the Filipino commandos but it added additional tests were needed to confirm his death.

Around that time, 42 elite policemen also were killed in gunbattles with different Muslim rebel groups in the far-flung region, the largest single-day government combat loss in recent memory. That prompted the military last month to launch an offensive that has killed about 100 suspected insurgents and led to the capture of Tambako.

Tambako's former armed group, the hardline Bangsamoro Islamic Freedom Movement, expelled him last year after his men beheaded a farmer in an attack on a Christian community in the south. That prompted him to form his own rebel band, which has been linked to several deadly bombings and attacks, including the clashes with police commandos, military officials said.

Insurgents involved in that skirmish were also from the Moro Islamic Liberation Front, the largest insurgent group in the south which signed a peace accord with the government last year. The Moro rebels said the clash was accidental because the police commandos did not coordinate their anti-terror raid with their group as provided under a longstanding truce.