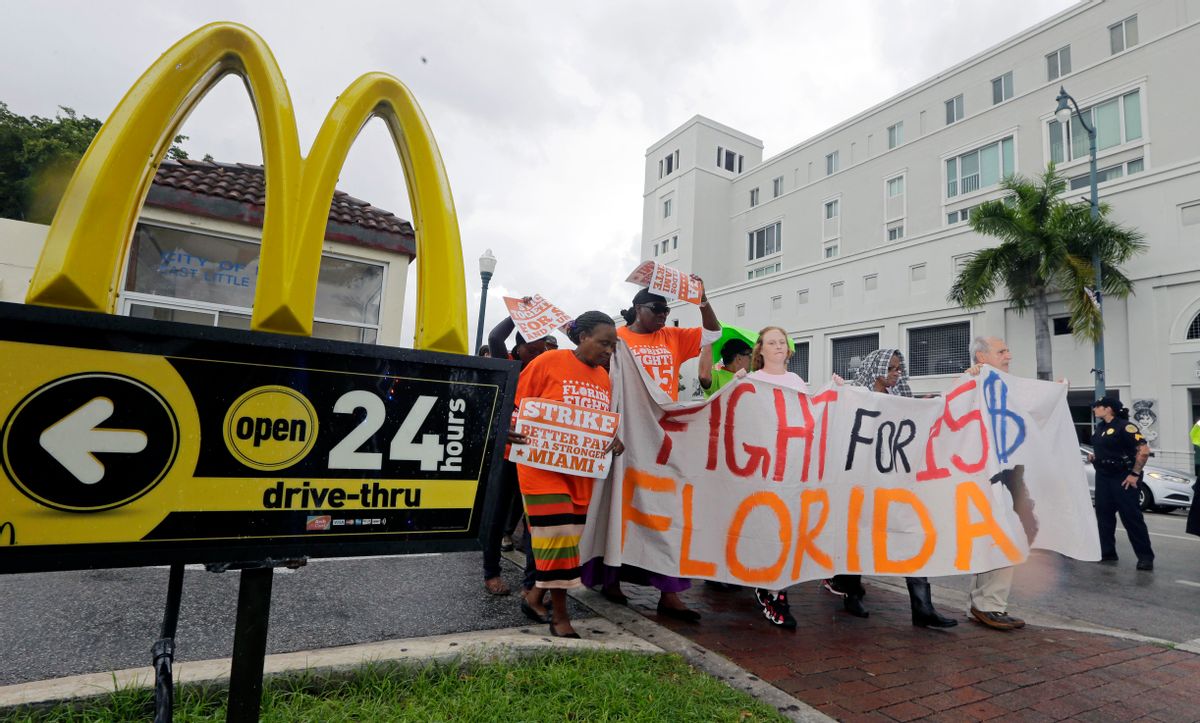 FILE - In this Dec. 4, 2014 file photo, people protest for higher wages outside a McDonald's restaurant in the Little Havana area of Miami. McDonalds workers in 19 cities have filed complaints over burns from hot grills and fryers and other workplace hazards, according to labor organizers. The complaints are the latest move in an ongoing campaign to win pay of $15 an hour and unionization for fast-food workers, in part by publicly pressuring McDonalds to come to the bargaining table. (AP/Alan Diaz)
--

McDonald's has been hit with 28 health and safety complaints from the chain's locations in 19 cities. The lawsuits, filed with the U.S. Occupational Safety and Health Administration, claim that the employees have suffered serious burns from their work at the restaurant.

"My managers kept pushing me to work faster, and while trying to meet their demands I slipped on a wet floor, catching my arm on a hot grill," said Brittney Berry, a plaintiff who has worked at McDonald's since 2011 in a statement. "The managers told me to put mustard on it, but I ended up having to get rushed to the hospital in an ambulance."

Another worker who was burned while cleaning a grill that was still on (according to the chain's instructions) was told to "put mayonnaise on it, you'll be good."

The complaints are the latest move in an ongoing campaign to win pay of $15 an hour and unionization for fast-food workers by publicly pressuring McDonald's to come to the bargaining table. The push is being spearheaded by the Service Employees International Union and began more than two years ago. Already it has included protests around the country and lawsuits alleging workers weren't given their rightful pay.

In response, McDonald's shifted the blame away from its own practices: "It is important to note that these complaints are part of a larger strategy orchestrated by activists targeting our brand and designed to generate media coverage," said the chain's spokesperson Heidi Barker Sa Shekhem, in a statement.