"The Jinx": Would Robert Durst exist without Andrew Jarecki?

The key to Jarecki's HBO series' success: An extraordinarily incestuous relationship between filmmaker and subject 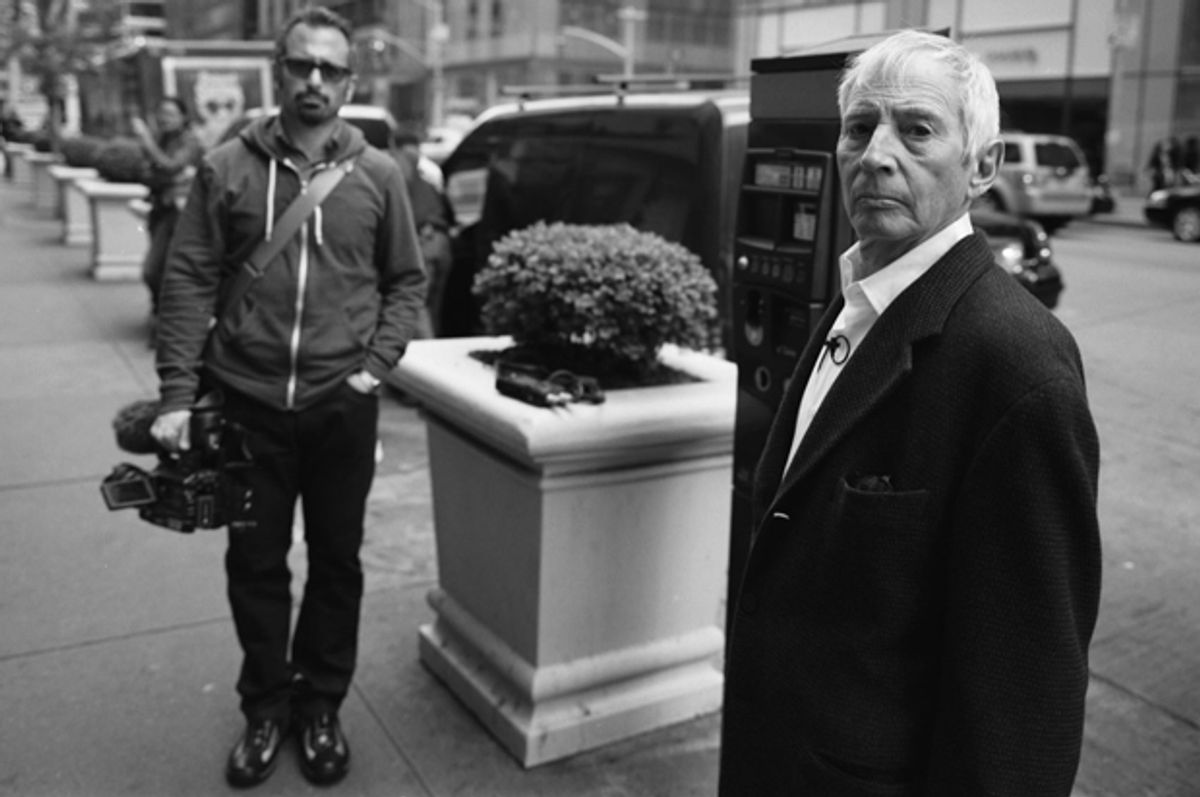 Up until last night, Andrew Jarecki was a one-hit wonder.

His one hit was quite a hit—the Oscar-nominated film “Capturing the Friedmans,” which was Jarecki’s directorial debut. The documentary, about a father and son convicted of sexually assaulting numerous children in Long Island and the family’s subsequent breakdown, won the Grand Jury Prize at the 2003 Sundance Film Festival. But until last night’s finale of “The Jinx”—timed almost impossibly well with the Los Angeles Police Department arresting the documentary miniseries’ subject, Robert Durst, on reopened charges of homicide—Jarecki’s entire creative reputation lay in one film made over a decade ago, as other projects opened to tepid sales or otherwise failed to make waves.

That is not to say he’s had an otherwise undistinguished career, exactly. But outside of “Capturing the Friedmans,” Jarecki has lived the life of an extremely wealthy creative man who has the time and energy to do what he wants, regardless of its possible success. In addition to being the eldest son of a very wealthy family, Jarecki made hundreds of millions of dollars off of the invention and subsequent sale of Moviefone. He’s done some surprising things, like co-writing the “Felicity” theme song with J.J. Abrams, and some less surprising things, like founding charity organizations that draw stars like Mariska Hartigay and Julianna Margulies to parties at his house.

His independent wealth—and his profile—gives him the ability to pursue the projects that interest him at his leisure. And so, HBO’s “The Jinx: The Life and Deaths of Robert Durst” was born, a culmination of a decade of research into one intriguing story.

What becomes clear, especially in the last episode of the miniseries, is how much Jarecki is interrogating himself, as much as he’s questioning Durst—so much so that after several episodes of existing mostly in the interviewer’s chair, by the fifth and sixth episodes, he and his creative partner Marc Smerling are engaged in the drama. The filmmakers went to the authorities as early as 2013 while making “The Jinx,” and in the final episode, Jarecki, Smerling and producer Zac Stuart-Pontier enter a state of tense agitation, as they debate how to bring up a particularly telling piece of evidence. While Smerling and Stuart-Pontier encourage him to be firm, Jarecki is clearly torn by his positive feelings for Durst, whom he has gotten to know over the course of dozens of hours of interview footage. “I liked the guy,” he says, almost plaintively. In one scene, during a period where Durst is evading the film crew, Jarecki and Smerling tell the camera they believe Durst when he says he’s in Spain. Jarecki starts to say, “I find him to be generally truthful,” when Stuart-Pontier, not facing the camera, cuts him off. “Are you guys fucking kidding me?” They’ve discovered an eerie resemblance between Durst’s handwriting and a murder note; they’re well aware that he’s lied to them before; they know that the man has admitted to dismembering a body. But in Jarecki’s mind, at least, there is still this feeling of goodwill—goodwill that, at least in this case, is proven wrong; Durst is not in Spain, he’s in California.

The key to “The Jinx,” and perhaps the key to all of Jarecki’s work, is an extraordinarily incestuous relationship between the filmmaker and his subject. Indeed, the time Jarecki has spent on the Durst case is similar to the time he’s spent on the Friedmans. A decade later, Jarecki was still heavily involved in efforts to exonerate the youngest Friedman, Jesse, of his sex abuse charges, and the New York Times observed in different articles, three years apart, that Jarecki’s long-running relationship with Jesse Friedman was an anomaly among other documentary filmmakers. Repeatedly, when Jarecki was interviewed about the Friedmans, his discussion of his onetime documentary subjects felt motivated by more than mere storytelling. “You have a responsibility because you’ve done the digging,” he told the Times. “[The case] just feels like unfinished business… and I have to stay until it’s finished.” Jarecki wrote a 50-page rebuttal to the Nassau County district attorney’s report on the Friedman case in 2013, going quite above and beyond the call of documentarian duty.

The filmmaker feels something quite strongly: a passionate curiosity for the nature of humanity, or a strong sense of mission. It is telling that even in Jarecki’s business ventures, the multimillionaire waxes sentimental: After being disappointed with how Moviefone was handled by its buyer, AOL, Jarecki attempted to buy it back some years later. He made the same attempt, and succeeded, with the movie rights to “All Good Things,” his first fictional feature film—first selling the rights to the Weinstein Company and then buying them back, reportedly for “several million dollars.”

It’s the sentiment, whatever it is, that ultimately makes “The Jinx” possible and compelling—and what makes Andrew Jarecki, in all likelihood, one of the only people who could crack Robert Durst’s shell. An extension of good faith; a willingness to hear Durst’s story, regardless of what it ended up being. Jarecki has described first shaking Durst’s hand as “electric,” knowing what those hands have done; but by the end, he’s genuinely floored by the idea that Durst may have actually “killed them all … of course.” Jarecki explores Durst’s relationship with his father, Seymour, just as he explored Jesse Friedman’s relationship with his father, and just underneath the surface is his own analysis of his own relationship with his father, who is, among many things, a billionaire.

The other crucial component is class. It’s not just that Jarecki and Durst get along, or see themselves in each other. They also move in the same circles—and recognize the calling card of extreme wealth in each other. Jarecki told Esquire: “Because my family had some similarity to Bob's family, I really think about what's kept our family together. Wealth comes with a lot of humiliation built into it.” A telling moment from the fifth episode, “Family Values,” occurs when Jarecki attends the same gala event where Douglas Durst, Robert’s brother, is receiving an award. Doug has been avoiding Jarecki through all official channels, so Jarecki speaks to him briefly in public. Jarecki is not pushy, or mean-spirited—that would not be in keeping with the milieu he and the Dursts are a part of. But he is there, and because he was invited, no less. He cannot be so easily shoved out the side door.

I was supposed to interview Jarecki and Smerling for this piece, but they backed out the morning of, saying: “Given that we are likely to be called as witnesses in any case law enforcement may decide to bring against Robert Durst, it is not appropriate for us to comment further on these pending matters.” Being an admirer of their work, I wanted to ask them a lot of little things, like: Were you scared, on that last day of interviewing? How long were you sitting on that envelope? Did you feel sorry for Robert Durst, in the end? Do you think he has a mental illness? And why didn’t you ever interview his second wife? A bigger question—the one Esquire asked in its headline—is, “Why does this man keep making us relate to sociopaths?”

It has been more than 30 years since Robert Durst first made headlines when his wife Kathy disappeared; it has been at least a decade since the trial in Galveston, Texas. Even if you were paying attention to the news in that whole time period, it would be possible to have skimmed past the story of a rich woman’s disappearance, or a potentially gang-related murder in Beverly Hills. It would be possible, because it was my experience; I did not know who Robert Durst was before watching “The Jinx.” And now that I have seen the miniseries, and read the extraordinary stories around it, my question is: Does Robert Durst exist without Andrew Jarecki? In some ways yes; in some ways, not really. Without Jarecki, this case sleeps for decades more; nobody arrests anyone in New Orleans; no cold case is reopened; Robert Durst’s name is forgotten by more and more people.

“All Good Things,” the fictional film Jarecki made about the Dursts, was a box office flop: $25 million to make, and only a bit over half a million in revenue. It was not very good, perhaps because the filmmaker was more invested in the real story. (A Durst spokesman snippily told the Boston Globe, “The movie is a work of fiction and, based on the reception at the box office, apparently not a very good one.") But the one person who mattered saw it and liked it: Robert Durst himself, who reportedly cried. It’s a film that concluded he was an abusive husband and a killer, but it was also a film that gave him emotional complexity.  As the first episode of “The Jinx” relates, Durst contacted Jarecki and Smerling because of that film, leading to the interviews that led to “The Jinx.” Jarecki’s words to the Chicago Tribune in 2010 now seem fascinatingly foreboding: “If we can make a movie that Bob Durst can watch in a theater and have an emotional reaction to, then I think we will have captured something."