We can't believe we have to explain this: Diabetes can't be cured with cinnamon rolls 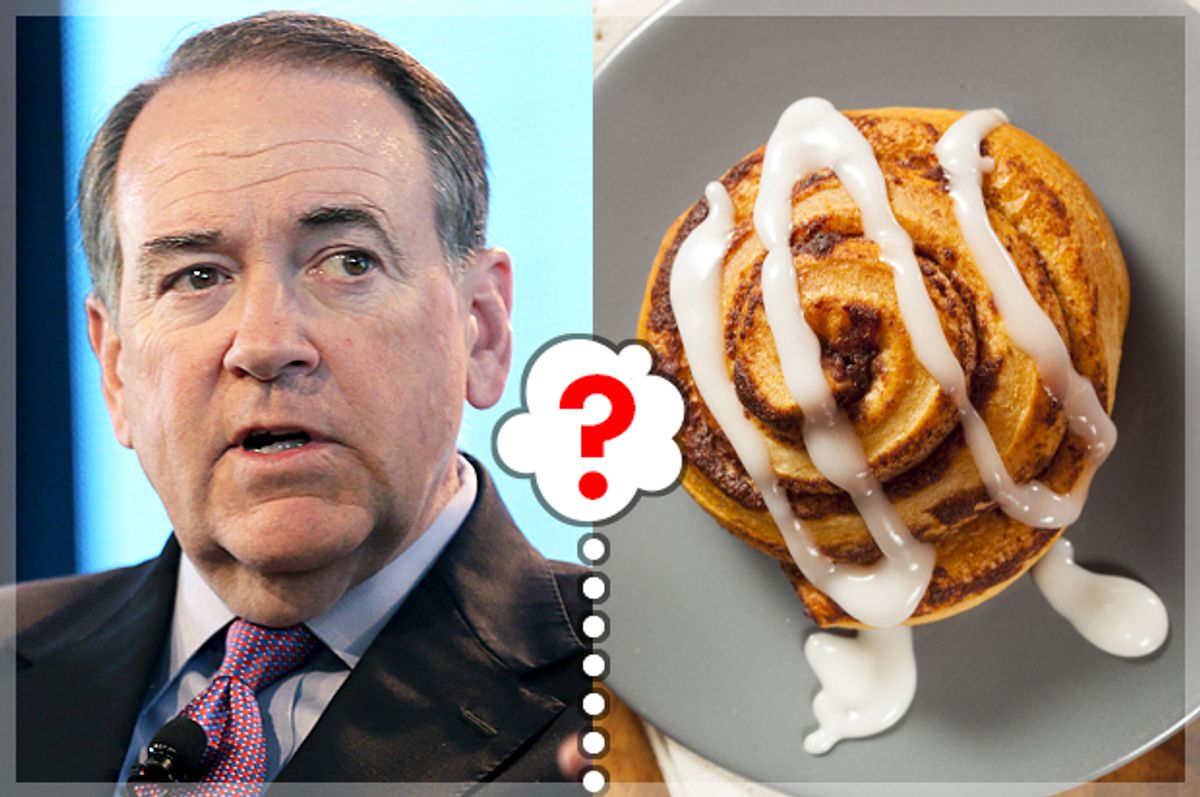 And with that, welcome back to "We can't believe we have to explain this," Salon's physician-approved treatment for logically challenged politicians.

In his appearance as a spokesman for Barton Publishing's "Diabetes Solution Kit," Huckabee (who shall from here on out be known as the Huckster) explains that the prescription drugs endorsed by the medical community for treating type I and type II diabetes aren't designed to help patients, but rather to turn them into “loyal, pill-popping, finger-pricking, insulin-shooting customer[s], so Big Pharma and the mainstream medical community can rake in over $100 billion annually.”

The Huckster, however, saw through this ruse. Instead of spending his money on medicine, he used methods similar to those described in Barton's book to, as he puts it, "lose 110 pounds of fat, get my own blood sugar under control, and completely reverse my type 2 diabetes."

But the informercial, with its promises to tell viewers the "truth" about diabetes for just $19.97,  has all the markings of a money-making scam:

A spokeswoman for the Huckster would not elaborate on the amount he was paid to appear in the infomercial; she told the New York Times that he ended his relationship with Barton several weeks back. Despite that, and despite the video's get-it-before-it's-gone warning -- "we're giving away so much free and hard-to-find diabetes remedy information that we may end up making this a paid membership website" -- the endorsement is still up and free to view as of this posting.

A number of scientific organizations, including the American Diabetes Association and the National Institute of Diabetes and Digestive and Kidney Diseases (NIDDK), declined to provide an expert who could comment on what is and is not effective in treating diabetes; a representative from the Mayo Clinic explained that they didn't want to get drawn into what he viewed as a political story. But David Schardt, Senior Nutritionist at the Center for Science in the Public Interest, was game to help set the record straight. Our conversation, which has been lightly edited for clarity, follows:

Have you encountered this company, Barton Publishing, before?

Oh, yes. Actually, a couple of years ago we looked into something they had about dissolving kidney stones with this homemade formula. It's a company that publishes a lot of different health materials, and it's sort of typical now of what goes on on the Internet and also with Kindle books and other ebook outlets, which is that this material on various topics is prepared by freelance writers or companies that then market them online or in infomercials.

If you look at the particular material that Huckabee and Barton are selling, it's anonymous. You look at the book and nobody's name is associated with it; that's probably because it was done by freelancers who really don't know much about the topic but can gather material from the Internet and put together an ebook, which is what he's basically selling. Joe Barton does a lot of these, and apparently he's successful. There are a lot of other people selling ebooks that they prepare based on what people want to buy; they find writers to write material and they sell it. And the quality may vary. When it's non-medical stuff, probably nobody's getting hurt, but when it's medical material it can be misleading or less than useful for people who, in this case, are suffering from diabetes.

Where does this claim that cinnamon or chromium picolinate can reverse diabetes come from? Is there any scientific merit to it?

Both of them have been studied for their effects on blood glucose levels. And there are some studies: in the case of chromium, there's a study in China done in 1997, so almost 20 years ago, and in the case of cinnamon there are a couple of studies overseas -- one in particular in Iran -- that show that it had at least short-term effects on blood glucose levels.

Specifically, we looked at what are called A1C levels: that's the new gold standards for measuring blood glucose levels over a period of time -- at least three months. That's now that the American Diabetes Association and other associations say should be the standard for diagnosing diabetes, for monitoring whether drug treatment is working. It's a measure of glucose levels in the blood over months at a time. When you use that standard and look at the chromium and the cinnamon and other dietary supplements in Barton's program, it has no impact on those A1C levels.

So according to the best evidence using the gold standard, these supplements don't work for lowering blood glucose levels and reversing diabetes.

What about the medicines that we do have for diabetes? The informercial makes a lot of claims that pills don't always work for everyone or that sometimes they just stop working. They say that this is all a scam peddled by Big Pharma. Do we have very good information showing that they are helping to treat diabetes?

Well, I'm not really an expert on the drug treatment, but I can say that these materials -- and diabetes isn't the only one; there are lots of these infomercials and these ebooks -- campaign against what's called Big Pharma. If you accuse Big Pharma of something, you automatically have some people who are sympathetic to what you're saying. It's easy to say Big Pharma is against this or Big Pharma is going to try and suppress that; there are a bunch of other diabetes programs out there, not just from Barton, and they all inveigh against Big Pharma.

No medication really works for 100 percent of the people for whom it's prescribed. There's natural variation, people have different genes that metabolize drugs in different ways, so there's hardly any drug that's going to work on everybody. So the claim that that's something unusual about diabetes drugs or that's a reason not to take diabetes drugs... well, then you wouldn't take any drug because there's always some people it's not going to work for.

It may be that some drugs, after time, lose their effectiveness for some people. That's common with hypertension, for example -- physicians are always trying to titrate drugs and switch drugs -- and it's true for enlarged prostates. There are a bunch of medicines that you try, one after the other, to find one that works for a patient, but it doesn't mean you give up all drugs and then go to dietary supplements. It's the same with statins, which don't work as well for some individual people as they do for others. A physician figures out which one works best for that person. So that's not an unusual situation. And that's what physicians are supposed to know how to deal with. That's why you go to someone who knows something about medication, and not Joe Barton.

Do you know anything about the claim that type 2 diabetes can be reversed?

From what I understand -- I'm not a diabetes expert and I'm not a clinician or physician -- it's tough to completely reverse diabetes. You can treat it and lessen the symptoms and control it, so to speak, which generally means getting your blood glucose levels down from the high levels that got you into diabetes. Even those powerful drugs, they don't reverse diabetes, they just lower blood glucose levels down somewhat. If you're lucky and you combine that with exercise and weight loss and diet, you can get down below the cutoff for diabetes, but most people are not able to do that. It's more a matter of trying to control your diabetes, to minimize it as much as you can.

I would also point out that Mike Huckabee apparently lost 100 pounds or more on some diet, which is great for him, and everyone would applaud that, but that's probably the reason why, if his diabetes was reversed -- and we don't know if that's the case, but if he got better -- it's probably because he lost all that weight. Most physicians will tell type 2 diabetes patients to lose weight to help control blood glucose levels, since it's probably the excess weight that got you into trouble.

So I guess you could say that that's the one true claim in the video, that eating healthy foods and exercising is generally a good idea for diabetes patients?

Absolutely. Physicians will tell you that weight loss and exercise can both have an impact on your blood glucose levels. They don't necessarily reverse diabetes, but they can control it.