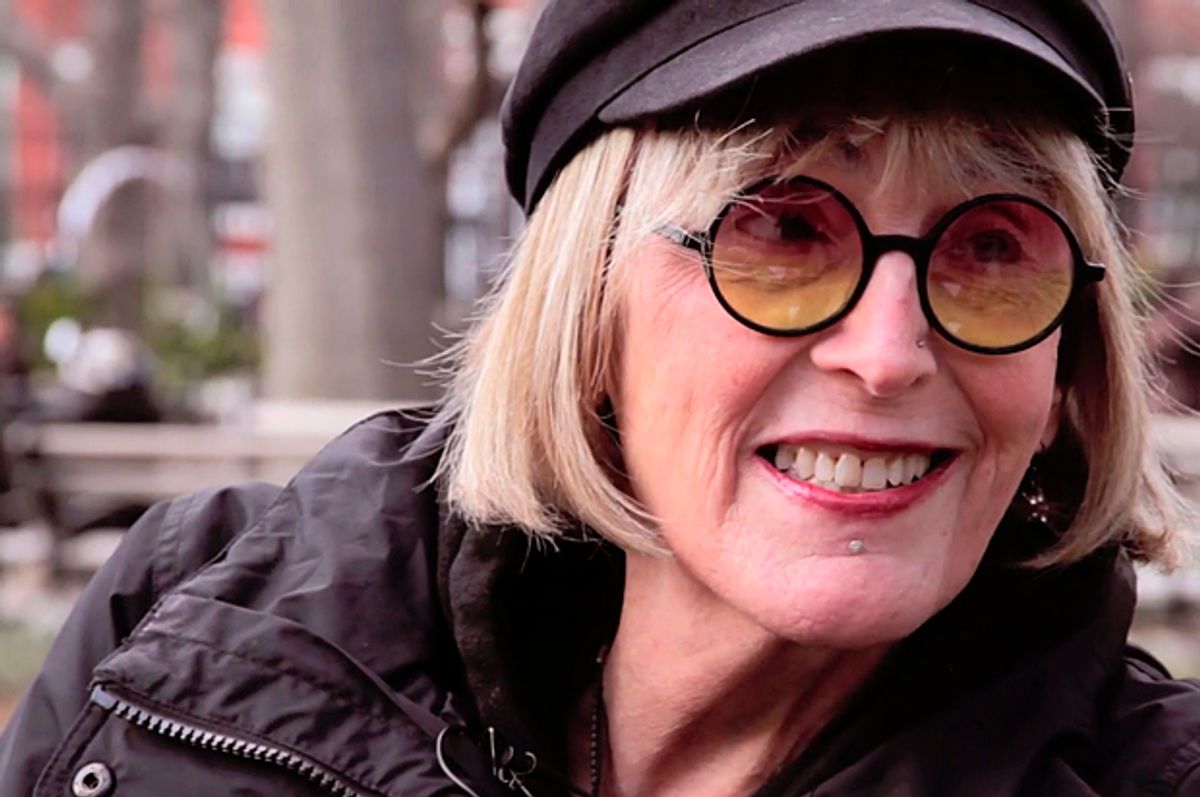 A playwright, a performance artist, an author, a legendary pioneer in gender theory – not to mention a radical thorn in the sides of both conservatives and LGBT lefties alike – Kate Bornstein is also the funniest and most endearing outlaw you’re likely to see onscreen all year.

Currently, she’s the subject of "Kate Bornstein Is A Queer & Pleasant Danger," a documentary by director Sam Feder – who, like Bornstein, does not subscribe to the gender binary – which has been screening around the globe (in museums, galleries, festivals – and perhaps most importantly, schools).

I was fortunate enough to speak with the ridiculously busy Bornstein prior to the launch of the film’s North American academic tour at L.A.’s Hammer Museum earlier this month.

You’re incredibly savvy when it comes to social media – having built up an impressive Twitter following – so why allow an outside voice to come in and make a film about you? (Especially since you’ve always “directed” your own life on your own terms.)

Y'know that old saying? Be careful what you wish for, you just may get it. Well, I wished and wished that someone would make a film about me and make me a star. Sam came along and offered to do that, and he's a guy I already trusted. We'd been friends for a couple of years. So I said yes, sure, let's do it! What I didn't know is how much of a top Sam is when he's directing! And yeah, I'm as careful as I can be about my image out in the world, but Sam's a good guy—one of the real good guys in the world. And I just went into artistic bottom space. That was completely joyful. I let go of any need to control the outcome of any shoots. One thing I asked Sam to do was to show my warts. Well, no, not my real warts, and I'm old so I've got some. But some of the bad stuff I've done, and still do. When I asked him to do that, he looked at me puzzled, but he promised he would. And I think he kept his word in this film. As to social media—ha! I'm not so much savvy as I love connecting with people. It's my great joy.

Considering your fraught history with the Church of Scientology, I’m wondering if you’ve seen the latest Alex Gibney film "Going Clear: Scientology and the Prison of Belief," which just premiered at Sundance, or read Lawrence Wright’s book on which it’s based. Does it give you hope to see folks finally challenging the Church in such a high profile way?

I've not seen the film "Going Clear." You can see a short film of me in the iBooks special edition of Lawrence Wright's book of the same title, though. I get to explain why I got into Scientology in the first place – it's when they told me that I'm not my body, I'm not my mind, and I'm not my soul. They told me I don't have a soul, I am a soul, a thetan, from the Greek letter theta, which they interpret as "pure thought.” They say that a thetan is an immortal spiritual being, completely transcendent of matter, energy, space and time. My conclusion from that description was – thetans have no gender. How cool is that! And I believed them when they told me they could cure me of what they described as an unhealthy obsession with wanting to be a woman. Yep, more and more people are coming out and talking about their experiences in Scientology. I love that a lot of us have learned from our time in that cult. I still use Scientology as a guiding light for how not to live my life. When I fall into a bad headspace nowadays, I'm almost always angry or greedy or grasping or blaming — all qualities which in Scientology are seen as good ways to be in the world.

Speaking of high-profile media, if Jill Soloway’s "Transparent" and trans actress Laverne Cox’s career are any indications, we non-cis folks seem to be gaining a visibility akin to the breakthrough of the gay community post-Stonewall. Does this thrill you? Does the possibility of a backlash scare you?

Isn't it wonderful? I spent nearly two years in or recovering from chemotherapy and radiation and I emerged from that to discover that the public face of transgender is a woman of color! [Bornstein was diagnosed with lung cancer in 2012.] What's more, the literary face of transgender is Janet Mock – a woman of color! And the pop culture face of trans is RuPaul, a person of color who seriously messes with gender, and lives his life in a gender other than the one that was assigned him at birth. So the world has the opportunity to see people who visibly embody the intersection of oppression by gender, and oppression by race. More and more, there are coalitions forming these days between race activists, artists and scholars, and gender activists, artists and scholars. What joy!

Now – transgender and cisgender. Could there be any better demonstration of the social construction of a false gender binary, akin to male and female? Transgender and cisgender are both made-up words. I was one of a few dozen people who in the 1980s began to use the word transgender as an umbrella term for anyone who's fucking around with gender. The last decade has seen the rise of the word cisgender, mostly aimed at people who are not trans men and trans women, with an eye to highlighting the privilege they enjoy by being perceived as normally gendered. But no one is one hundred percent cis. Just like no one is one hundred percent trans. False binary, like queer and straight. But don't get me started!

As to visibility, I'm bowled over. But please take a moment to see who it is that's visible – trans men and trans women – people who end up squarely in the binary of male and female. And there’s nothing wrong with that! Really. There's everything right about being seen as the man or woman you know yourself to be. There's deep truth in the journey of trans men and trans women. And still, they're only part of the world of trans. The people who don't get the respect of the culture at large are the folks who define ourselves as gender nonconforming and non-binary—and the drag queens, the sex workers, the chicks with dicks, the she-males. And the diesel butch dykes and the high femmes – and the sissies and the faggots, and the trannies. These are the folks who've been systematically excluded from the women's movement, the gay rights movement, and now the trans movement. So I take this talk of "tipping point" with a grain of salt. It's more the tip of an iceberg.

As someone born into a female body, but who identified as a gay guy ever since I learned about homosexuals (“Hey, that’s me!”), the thought of gender reassignment surgery never crossed my mind. Perhaps it’s because I came of age at a time when the word transgender was never heard, but I also never felt compelled to match my outside with my insides. Why should I change myself to make society feel comfortable? It just seemed more rebellious to be mismatched, to live an alternative lifestyle in a female form. Do you ever think there’s perhaps too much pressure on non-cis people these days to choose hormones and surgery over other options?

Back when I was going through with my gender transition, there wasn't any public discourse of non-binary gender. You were a man or a woman, and you became a woman or a man by means of surgery, hormones, and changing everything about your life. Everything in your life that was an embodiment of misgendering had to be challenged and changed. That was the deal back then. Nowadays, we know better. We know that it's possible to be a man or a woman without medical permission and assistance. It's why the word transgender is now used to name trans men and trans women who may or may not have gone through surgeries and/or hormone treatments. It's how you can see yourself as non-cisgender. You are a perfect example of a person who's living their life as a gender other than that they were assigned at birth. RuPaul is another great example of non-cisgender. Out of drag, you cannot tell me that the person you see is the same gender that's on his birth certificate. Most drag queens can't pass as real men when they're out of drag. Most drag queens are not cisgender.

The pressure on non-cisgender people these days is the pressure to be perfectly transgender as a man or a woman—just like everyone else. The cultural progress is that those non-cis people don't need any medical intervention to live their lives as the person they've always known themselves to be. They have the dignity of genital privacy. But some of us are just fine with you knowing all about our genitals—mostly, we self-define as trannies.

Finally, I’m wondering how your cancer diagnosis has changed you or your outlook on the world?

(Boisterous laugh.) Well, for two years I was expecting to die of lung cancer and/or leukemia. Now, and for the time being, there's nothing of either of those cancers in my body. I'm alive. Quel joie de vivre! I get to live my life as an old crone, an elder, and a little old lady. All that is new! And I'm not directing the course of my own life so much as I am celebrating the possibilities of my life, given my new station in it. Plus my chemo-brain is still with me, but it's gone to the point I'm working on a new book. Not ready to talk about it too much just yet, but it should be a lot of fun.