What would MLK say?: Divestment and the call for "order" over justice

As the BDS movement gains strength on campus, accusations of "divisiveness" get trotted out to try to contain it 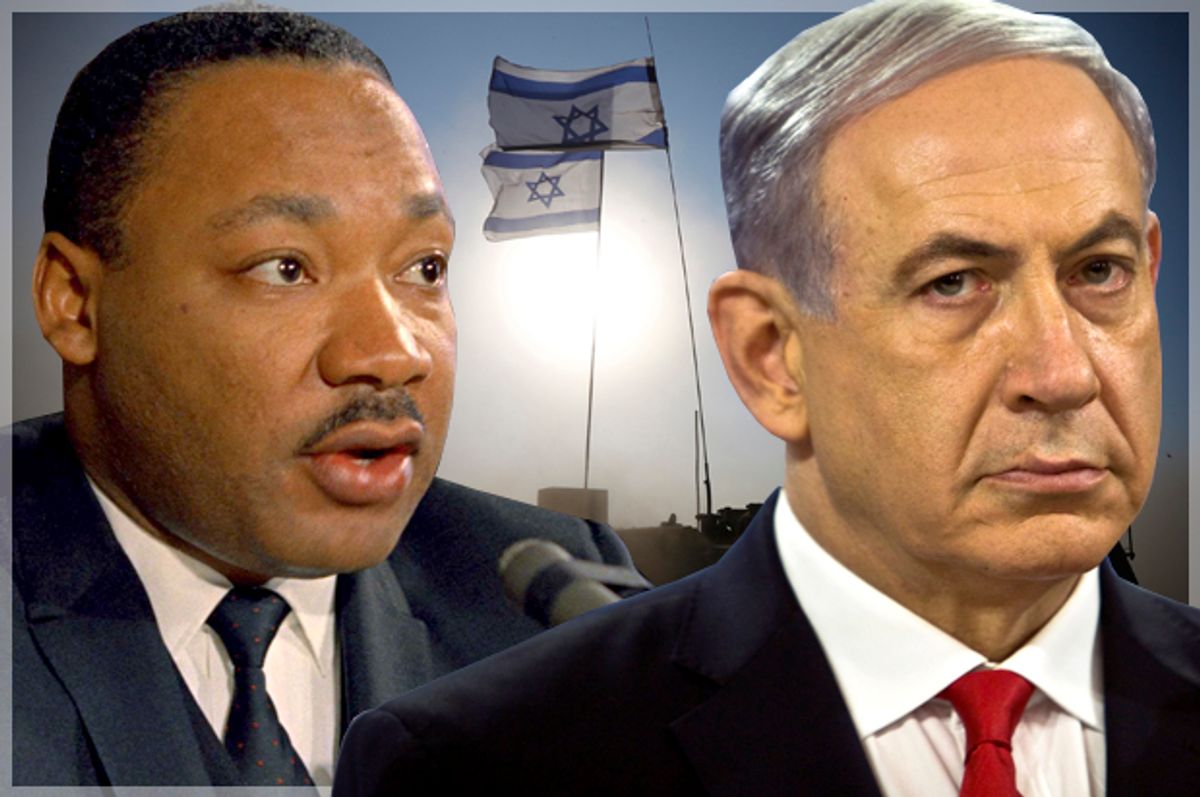 There is no doubt about it—whether you are a pro-divestment advocate celebrating the wave of divestment victories on college campuses (and also even efforts that have failed, but by narrower margins than previous efforts), or someone who is appalled and concerned that more and more college students are being convinced that their campuses should not hold stock in companies that profit from the Israeli occupation of the West Bank and Gaza—the issue of divestment is bigger, louder, and more urgent that ever before.  Most recently the University of California Student Association, representing the collective student body of the entire University of California system, voted for divestment, and in so doing reflected what has been going on at the individual U.C. campuses.  As Marium Navid and Rahim Kurwa note in an Op-Ed:

Today, a majority of UC campuses, including UC Irvine, UC San Diego, UC Berkeley, UC Riverside and most recently, UCLA and UC Davis, have now officially voted to divest from companies involved in Israel’s occupation. This year’s activists passed resolutions at UCLA and UC Davis by sweeping margins, highlighting just how thoroughly debunked anti-divestment arguments have become. Dozens of student groups on every campus have endorsed divestment, thousands of students have been educated and mobilized, and the new status quo position at the university is in support of Palestinian human rights, in opposition to the occupation and in favor of divestment.

It may be too early to say with any certainty that this is the new status quo, but there is no doubt that a strong shift is occurring, and this is creating some concern on the part of university administrators, who are worried about the volume and tenor of some of the debates.  Indeed, in an effort to manage the debate on the issue of divestment at the University of Toledo, Ohio, the administration carefully crafted a very narrow scenario that had a set number of representatives carry on the discussion in a closed session.

One cannot envy university and college administrators whose institutions have the mission of liberal education, which not only accommodates but even champions and solicits the free flow of ideas.  How to invite debate and at the same time contain it so as to maintain the equilibrium of the institution?  One recent tool that has been brought out has been the idea of “civility.” As I have written in Salon previously, these much-heralded calls for “civility,” while on the surface appealing, need to be examined closely to see just who is being pressed to be civil, and about what.

Civility (or something that would describe a mutually negotiated protocol for how debate can be conducted such that each party is equally free to express their views), is certainly important, most especially in the classroom.  But along with the need to look carefully at how the idea of civility is sometimes being selectively enforced by administrators, it is crucial to look at another term that is now being trotted out.  If civility is the positive ideal to which we should adhere as we enter into our debates over divestment from companies that facilitate the Israeli Occupation, then “divisiveness” is the negative consequence of even broaching the subject, according to some people.  And as much as we should be careful about signing on reflexively to “civility,” so too should we pause before we back off from the topic of divestment (or boycott, or sanctions) because it is “divisive.”

For many of us who were alive during both the civil rights era and the Vietnam War, the call to maintain “peace” and tranquility, to keep the status quo, seemed an all too transparent pretext for keeping the forces of oppression, injustice and authoritarian discipline firmly in place.  It rang entirely false.  The condemnation of protest, of calls for change, all in the name of protecting us from “divisiveness,” were to our minds premised on the illusion that the world was not already divided.  And it was divided in a way in which the weak, the powerless, the disenfranchised were contained and exploited.  And from the point of view of those who were comfortable with that situation, calls for change were variously annoying, troubling, upsetting, outrageous, depending on the nature and the volume of protest against and resistance to the status quo.  The label of “divisive” was slapped on any and every serious protest.

It is an enormous irony (and “irony” does not even begin to describe this) that recently it was our current secretary of Homeland Security, Jeh Johnson, who reminded us that Martin Luther King Jr. was considered "divisive" in his time:

Johnson alluded to the violent reaction that often met protests led by King.

"The reality is that, in his time, the man we honor today with a national holiday was divisive; to many, he was a troublemaker, to force the social change we now all celebrate," Johnson said. "When Dr. King arrived in many of the same cities for which a major street is now named for him, the mayor and the police commissioner viewed his visit with dread and couldn’t wait for him to leave."

In fact, a document found in the King Center archive is specifically titled “Race Hate and Divisiveness”: “Rev Dr Martin Luther King’s plan to disrupt the larger Northern cities with massive demonstrations of civil disobedience is the latest in a series of misguided moves that can only provoke greater divisiveness and discord.”

We have to understand how it is that Secretary Johnson can say what he did.

In the safe distance of history, it’s fine to “remind” us of who King was—a man who was scorned, condemned, hated and, yes, spied upon by the FBI, an agency whose function is not at all unlike that of Homeland Security, after all.  It’s fine to say these righteous things when you are on this side of history, when the struggles of King and Malcolm X and others have finally yielded some degree of freedom.

But why don't we try to learn from that insight—that those we condemn in the present for creating “divisiveness” might be the voices of liberation and justice that we will celebrate in the future?  The success of the student movements to divest, the success of organizations and cultural workers engaged in the academic and cultural boycott of Israel, the endorsement of BDS by Jewish Voice for Peace, might be seen as charting the way out of a false sense of unity, a unity that has been underwritten by silence and fear.

Indeed, in his famous “Letter From a Birmingham Jail,” Martin Luther King Jr. spoke explicitly on this issue: “I have almost reached the regrettable conclusion that the Negro's great stumbling block in his stride toward freedom is not the White Citizen's Counciler or the Ku Klux Klanner, but the white moderate, who is more devoted to ‘order’ than to justice; who prefers a negative peace which is the absence of tension to a positive peace which is the presence of justice.”

No one would want to endorse divisiveness for its own sake, or in a thoughtless and purposefully destructive manner.  But it’s important for us to take stock of why and how we are “united.”  And why be united around injustice?  Is our peace of mind worth backing off from serious discussions of complex and urgent social issues?  Is that what a university is for?