Will Ferrell and Kevin Hart's new movie "Get Hard" sounds like a racist, homophobic mess

"There is nothing this movie can imagine that is worse than gay sex, it seems to be saying" 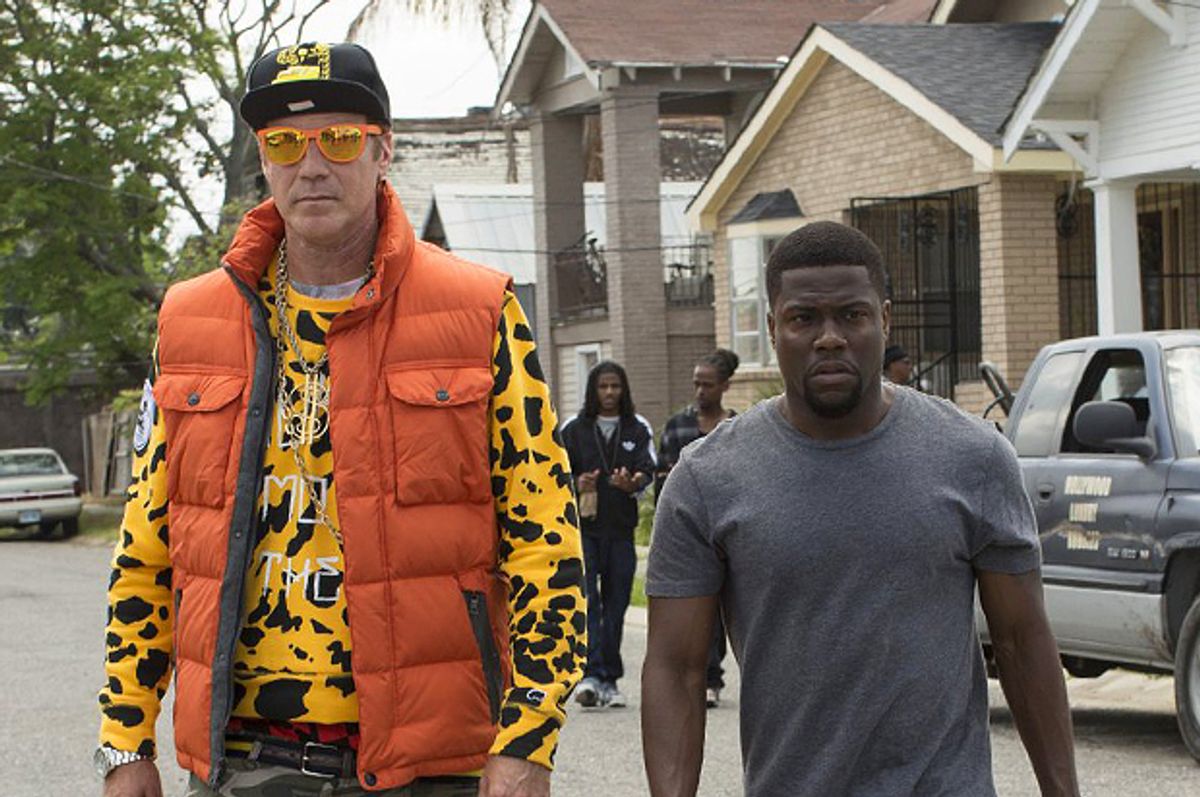 Will Ferrell and Kevin Hart in "Get Hard" (Warner Bros. Entertainment)
--

Early reviews are rolling in for Kevin Hart and Will Ferrell’s new prepping-for-prison comedy “Get Hard,” and things are not looking so promising. At SXSW, an audience member took to the podium and told director Etan Cohen "As a fellow Jew, I’ve got to say that this film seemed racist as fuck.” A visibly shaken Cohen responded that they had worked to find "a delicate balance" and that "when [they] were testing the movie, Ferguson was going on. It was hard to modulate… how far to push it.” Yet judging by the few reviews that are out, this audience member isn’t the only one who had some problems with the film’s problematic sexual and racial politics. Here's what the critics had to say:

"I suspect that in years to come, media studies students will watch this film and be astonished that such a negative portrayal of homosexuality persisted in the mainstream in 2015. The film’s sensitivity to race isn’t much better. It sees King attempting to join a white supremacist fraternity at Darnell’s instigation, and then finally bonding with a black gang who he teaches the tricks of his trade: “The stock market is gangsta,” they conclude.”

"For those who don't find the juxtaposition of a man's terrified face and another's exposed crotch hilarious, Get Hard next has urban gangs: Hoping to set James up with people who can protect him in prison, Darnell takes him to see his cousin Russell (Tip "T.I." Harris), the leader of a crew of thugs just as crudely imagined as the people in James King's world. Before the movie gets too lost in imagining the racial politics of prison life, though, Darnell and James realize there may be a way to prove his innocence and keep him from having to touch anybody else's penis. Here's hoping.”

"There is nothing this movie can imagine that is worse than gay sex, it seems to be saying. How in the year 2015, as we see over 30 states finally recognizing same-sex marriage, can we possibly justify this thing? How can anyone sit in the theater and just laugh and laugh and laugh as the movie repeatedly screams, "Oh my god, gay people are so gross!”"

"There are some schools of thought, of course, which might contend that nothing could be funnier than the sight of Will Ferrell falling to his knees in a toilet stall and getting slapped in the face with another dude’s junk, and they may well have a point. But what makes this particular sequence so noxious isn’t just the familiar specter of gay panic, which for better and for worse has become a pillar of American screen comedy. It’s the coy, cynical disgust with which the scene is framed, featuring just enough genital exposure (it might have been spliced in by Tyler Durden) to presumably freak out the target audience without jeopardizing the R rating. The movie tries to strike a tolerant pose after the fact, but it’s a weak ruse; frankly, the virtual-reality sodomy in the recent “Hot Tub Time Machine 2” was handled in more enlightened fashion."

""Get Hard" is, first and foremost, a morally repugnant movie, where virtually every character who appears onscreen is boiled down to a one-note caricature. While the subversion of the Hart character is a lovely twist, every other black character in the film outside of his family, is as broad a stereotype as you can think of, especially the pack of gang bangers led by Darnell's cousin (played by T.I.). Half of Ferrell's dialogue is a weird mishmash of racial barbs aimed at being satirical and stuff that is just flat-out racist. But as racist as "Get Hard" is, it's even more homophobic. This is a movie that uses the word "rape" more than actual movies about rape. It whips itself up into a furious gay panic and never, ever relents in an endlessly one-note gag about the horrors of homosexual sex that runs for the entire movie."