"We just agreed we would disagree": Jeb Bush & the Catholic Church's "culture of life" hypocrisy

Bush says his Catholic faith is central to his politics -- unless it means aiding the poor, helping the sick or... 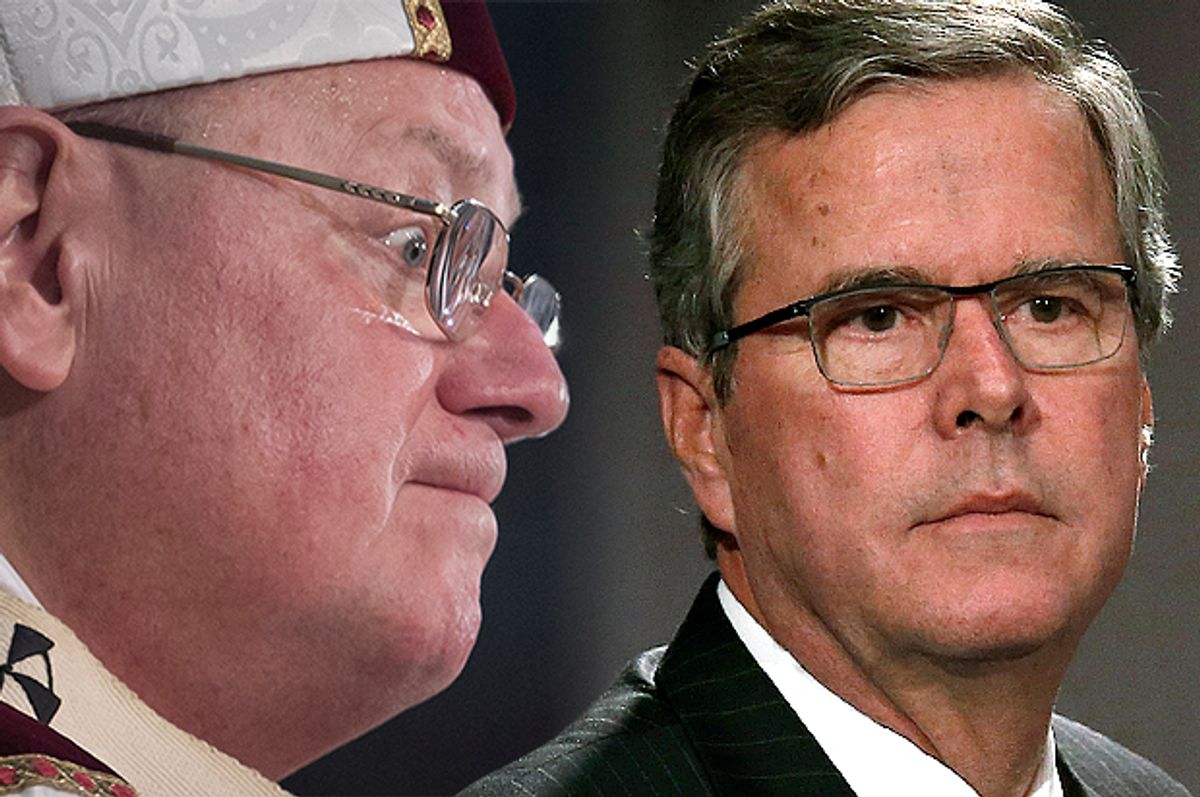 Jeb Bush converted to Catholicism 20 years ago. He is guided by his faith. He enjoys going to church because it makes him feel serene. He sings and shakes hands with his fellow congregants during Mass. He used to ride a bike to church.

These are among some of the more mundane revelations in a Wednesday New York Times profile of Bush and his Catholic faith. You could swap out Bush’s generic reflections on his religion for virtually any politician of any faith and the pull quotes would likely be identical.

Here’s where it gets interesting:

Many of his priorities during his two terms as governor of Florida aligned with those of the Catholic Church -- including his extraordinary, and unsuccessful, effort to force a hospital to keep Terri Schiavo on life support, as well as less well-known, and also unsuccessful, efforts to appoint a guardian for the fetus of a developmentally disabled rape victim and to prevent a 13-year-old girl from having an abortion. He even, during his first year in office in 1999, signed a law creating a “Choose Life” license plate.

He differed from his church, significantly and openly, over capital punishment; the state executed 21 prisoners on his watch, the most under any Florida governor since the death penalty was reinstated in 1976. But he has won praise from Catholic officials for his welcoming tone toward immigrants and his relatively centrist positions on education -- two issues in which he is at odds with the right wing of his party.

“Anybody could see he was a devout Catholic -- he was new to the Catholic faith and took his faith seriously,” Bishop John Ricard, who led the Pensacola-Tallahassee Diocese during Bush’s tenure as governor, told the Times. “He approached the whole thing, especially the death penalty, with seriousness and respect, but we just agreed we would disagree. We were firm in our position, but I think he was sincere about his.”

Bush also counts New York Archbishop Timothy Dolan among his fans in the church’s hierarchy. Like Ricard, Dolan seems just as eager to agree to disagree with Bush when he diverges with Catholic teaching on, say, state executions, poverty, prisons and universal access to healthcare. During an appearance last year on “Meet the Press,” Dolan praised Bush as an innovative governor and gushed, “I sure admire him.”

There's nothing new or unique to Bush about the church establishment's selective view of what's non-negotiable and what can be chalked up to a difference of opinion when it comes to doctrine, but it has become increasingly hard to ignore as the church beefs up its place in politics. This is particularly true of its opposition to the new healthcare law, one of the most pro-life pieces of policy to advance in recent years. (Literally. Access to healthcare allows people to not die from preventable and treatable illness.)

While a full embrace of the Affordable Care Act -- birth control provisions intact -- will put you on the wrong side of the church, doing everything in your power to dismantle a social program that helps low-income people see doctors doesn't register as a blip on Dolan's political radar in terms of Bush's legacy.

This is not an insignificant oversight. One of the major changes instituted in Florida under Bush was a complete retool of the state’s Medicaid program. As Christopher Flavelle at Bloomberg News recently pointed out, it was an unmitigated disaster that deprived people of basic care. This failed system also happens to be the plan Bush has offered up as an alternative to the Affordable Care Act.

A few numbers on how it went down in Florida, as reported by Flavelle:

Almost one-third of pregnant women got no care within their first trimester, and just 1 in 2 women had a postpartum visit between three and eight weeks after giving birth. Those figures put Florida in the bottom 25 percent of Medicaid ratings nationwide.

Less than two-thirds of adolescents got their required immunizations or lead screening. Fewer than half the children covered by the plans saw a dentist.

Half of adults age 46 to 85 who were diagnosed with high blood pressure weren't getting it adequately treated. More than half of those with diabetes, a leading cause of adult blindness, failed to get an annual eye exam. Two-thirds of diabetics weren't getting adequate treatment for cholesterol, and just 45 percent had their blood-glucose levels under control.

Now here’s Dolan on the Affordable Care Act, a law that has extended coverage to more than 16 million people: “We want to be with [President Obama]. We want to be strong, and if you keep doing this [requiring birth control coverage], we’re not going to be able to be one of your cheerleaders,” Dolan said on “Meet the Press” after the Supreme Court agreed to hear the Hobby Lobby challenge.

Dolan's position is clear: It doesn't matter how many people the law helps, the birth control provision is a non-starter for the church. They will fight it as long as contraception is part of the package.

You could substitute the federal minimum wage (which Bush does not want to raise) for healthcare. Or the death penalty. Or social programs and food subsidies that are regularly on the chopping block in Republican budgets. The conservative economic agenda, which cannot be divorced from the conservative social agenda, is not just out of step with church teachings around poverty and healthcare, it is downright hostile to them.

And yet the church hierarchy’s most visible and vocal fights are focused on a healthcare law that extends coverage to millions, abortion and marriage equality. Step out of line on those and the church will not “be one of your cheerleaders.” But when it comes to politicians whose policies punish the poor, execute and incarcerate, deny essential services to low-income families and keep kids from seeing a dentist? Well, then the church leadership is willing to agree to disagree.