The chain recently made a bold move to embrace the bush. Now it seems to think natural bodies are too risqué 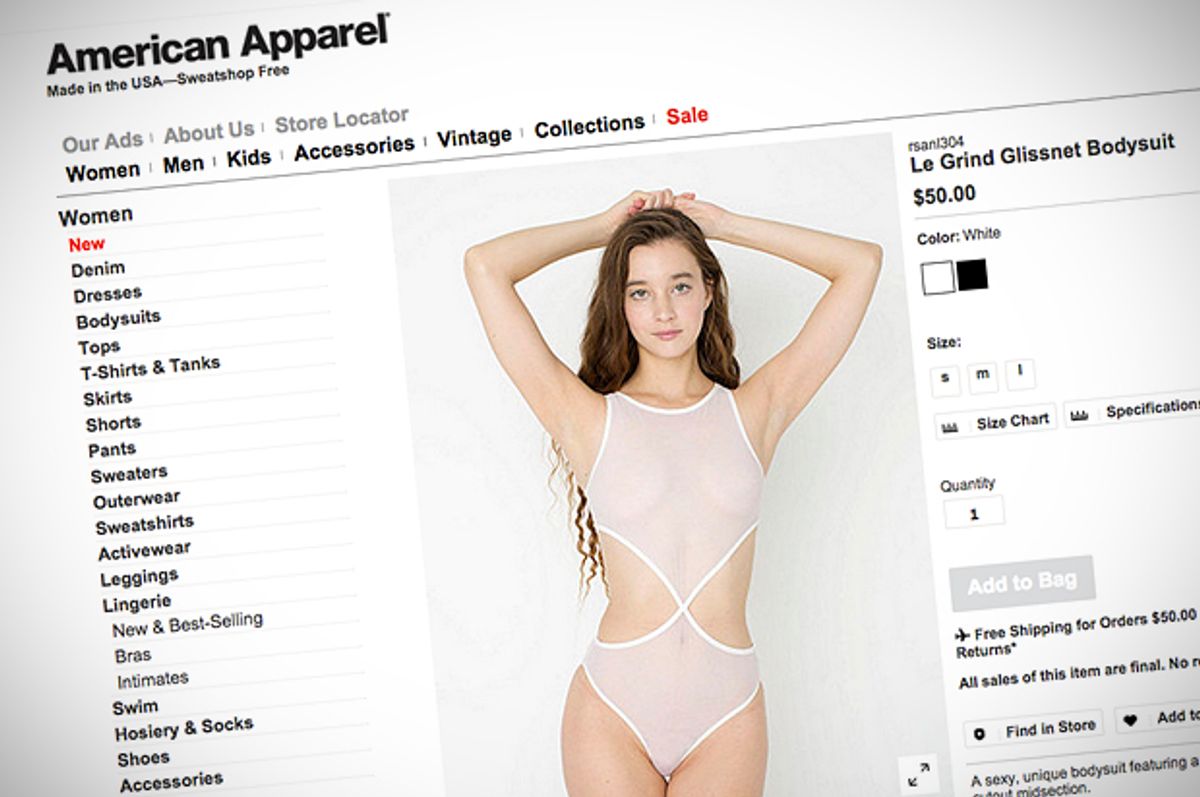 It wasn't so long ago that American Apparel introduced mannequins with pubic hair into one of its stores, but oh, how times have changed. The brand, which has long been known for its "natural" model aesthetic (meaning that some of its scantily clad, overwhelmingly thin/white models sport visible pubic hair in advertisements), now seems to be taking a different approach to portraying women's bodies. It's one that includes no pubic hair and no nipples, and also a whole lot of airbrushing.

According to ANIMAL New York, there have been several striking changes in the lingerie section of American Apparel's website over the past week, with models that had previously been shown with both nipples and pubic hair suddenly devoid of both. ANIMAL's Prachi Gupta (formerly of Salon) took a series of screenshots to illustrate the changes, which show women "airbrushed to look like plastic dolls rather than real women."

The alterations were initially flagged by anti-censorship activist Michelle Lytle, who accused the company of trying to distance itself from the infamously provocative marketing strategy instituted by ousted founder and former CEO (and alleged sex offender) Dov Charney. And, as Gupta points out, the change likely does reflect American Apparel's efforts to overhaul its advertising, which has been criticized for sexualizing girls and objectifying women:

New CEO Paula Schneider is trying to distance the brand’s from its “borderline pornographic” aesthetic, as the New York Times described it. In July, she told the Times that she wanted to make keep the brand edgy without being overtly sexual. “This is an edgy brand and it’s always going to be an edgy brand, and it’s about social commentary, it’s about gay rights, and it’s about immigration reform. It’s about the things millennials care about,” she said.

But the fight to uncensor nipples and body hair in media, on the Internet and in real life are very much issues that millennials care about. For years, feminists have been arguing for equal rights to be topless with Free the Nipple movement, which has gained the support from the likes of Scout Willis, Miley Cyrus and Rihanna. Activist and Free the Nipple documentarian Lina Esco framed the problem when she shared a surprising statistic: “Did you know an American child sees over 200,000 acts of violence and 16,000 murders on TV before they turn 18 and not one nipple?”

As Lytle put it, American Apparel's strong stances on other key social issues only makes its approach to gender equality more upsetting. "It’s kind of laughable for them to think that removing nipples from their images of their sheer lingerie is the best way to do this considering their questionable ad choices in recent years," she told ANIMAL. "This is a step in the wrong direction and is contributing to the sexualization of a woman’s body at a time where there is a large and growing movement for equality."